I was so excited when Sue said she’d consider a guest post about my book launch, because she said the magic words, ‘I try to steer clear of politics on the blog, but I’m all for humour.’ It gives me a chance to talk about where a book for people who are sick of politics has come from. Although, I should add that I did give her pretty short notice, ie, less than a week. I need to rush this book out, you see, before the world at large nicks any more of the gags.

The idea began back in my student days, when we were all too clever for our own good, and late at night, after too much cheap beer, we’d sit about sneering at, well, pretty much everything. ‘The problem with politicians,’ I’d opine, ‘is that they want to be politicians. Countries should be run by random ballot, like jury service. Except, the occupations that would be banned would be anything that smacked of enjoying power over other people. Hypnotherapists, gynaecologists and the like. It couldn’t be any worse, and some years might be better.’

Well, time went by and my pet idea sat in the back of my head. I actually did do jury service once, and realised that random mixes of people could have their own problems…just one really stupid person could cause a lot of trouble. In the meantime I became a non-fiction writer. Travelogues were my thing. Not because I could afford to travel, but because I discovered that doing a mad job somewhere new made books happen. I told people I didn’t have the imagination for fiction and kept on looking for bonkers jobs to write about. It makes a great cover for a patchy CV.

But then…I was in the queue at Tesco one day a couple of years ago, bickering with my partner about waiting for a cashier when the self-checkouts were available. I refuse to put people out of work, you see, whereas he just wants to get out of the shop.

The woman who scanned our groceries was in her sixties, chatty and fun. She had a laugh and a joke for each customer and everyone left her till with a bit more of a smile on their face. I began to wonder what would happen to her when the automation takeover was complete. Somehow the two ideas coalesced before we got our bags of shopping home and Queenie’s Teapot wrote itself. I was aiming for a whimsical romp through the world of what-if: Yes Minister meets Johnny English. This wasn’t a pop at any political ideal, not a rant about who votes for what, just a world where democracy is no more and people muddle through the best they can. A bit of fun with a few serious questions hiding at the back and trying not to make a fuss.

Nobody was talking about the death of democracy at the time and the barmy antics of Queenie and her colleagues felt far-fetched. A bumbling idiot for Foreign Secretary, rampaging around the world insulting people, was one of my sillier ideas.

But in the intervening years the world has caught up; life imitating art frighteningly fast. I originally wrote a political satire but I understand that the ‘post-Brexit’ novel is now a thing. I also understand that, by next week, ‘post-Trump’ novels will be a thing too. I had planned an Easter launch, but I’m bringing it forward, just in case anyone is already sick of democracy.

Scroll down to read an excerpt from Queenie’s Teapot

Carolyn has been a psychologist, a paramedic, a proof reader, a patisseur and several other things, not all of them beginning with P. A trucker, for example. She grew up in London and moved to Kitchener-Waterloo in Ontario (with her longsuffering son who was then nine) on a whim. She began writing the day she decided to try and see the world…doing both just to find out if she could. When excerpts from her first travelogue were published by the Rough Guides she decided to keep on doing both. It made a change from teaching CPR to nightclub bouncers and designing wedding cakes.

Carolyn maintains that she is either multi-faceted or easily bored, depending on who is enquiring.

She is now a Canadian citizen and divides her time between Ontario and the UK, writing web sites and copy, editing for other independent authors and communing with Queenie.

Her Armchair Emigration series, currently sports books 1 and 3. A Year on Planet Alzheimer details her first working trip from London to Canada and Trucking in English sees her driving 18-wheelers across North America. In between, Carolyn gained her Canadian citizenship by running a B&B, which didn’t go smoothly, but that just makes the books more interesting. The trilogy will be complete with ‘Bed and Breakfast’, which was under construction when Queenie, popped into her head. It will be a little more delayed, since beta readers for Queenie’s Teapot demanded a trilogy. Floreat Queenie is currently being edited and is due for launch by Christmas 2017. 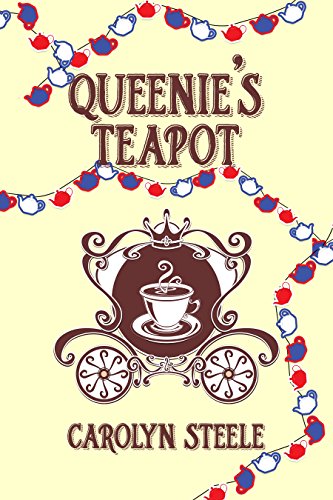 A post-Brexit, post-Trump romp through the world of what-if…
In a world where democracy has been declared no longer fit for purpose, a cohort of randomly-selected British Republic citizens receive their call to serve in parliament. As the strangers gather to learn their tasks for the next three years, the Cabinet Support Team try to fit jobs to skills—but Queenie can’t do nuffin’. Naturally she becomes head of state. Together the new government muddles through, tackling unrest on the streets and a spot of global bioterrorism in addition to their own journeys of self-discovery.

The ball of kingfisher-blue mohair dropped from Queenie’s lap and rolled across the parquet, coming to a stop at the feet of the Chief Secretary to the Cabinet. Every gaze in the room followed it. Gerald Lambert sighed, fully aware his words would have to be repeated, his wisdom no match for the yarn, which was now reflecting so fetchingly in the high shine on his bespoke business shoes.

Caroline observed, not for the first time, that Gerald was the only man she knew who could look down his nose without moving his head. Ostensibly, she was taking notes on the day’s proceedings, but her main task comprised committing to memory as many quirks and character flaws as were immediately obvious in the new intake.

The knitting might be an issue. She jotted knitting at the back of her notebook as she considered the current, woolly conundrum. Gerald would not alter his stance; he would rely on military bearing to re-establish lines of communication when the novelty wore off. The room was, however, full of people who had no reason to comprehend the significance of Gerald’s posture. Yet. They were all still transfixed by the yarn. Some were even stifling giggles.

Caroline slipped from her chair, executed a parabolic trajectory towards Queenie which took in Gerald’s temporarily fascinating brogues, scooped up the ball of yarn and deposited it back in Queenie’s capacious tote bag. Knitted, she noticed.

‘Thank you, dearie.’ Queenie broke the silence with a toothy grin and a mighty glottal stop. ‘I’m always doing that, drives hubby mad it does, the wool starts bouncin’ around all over the floor when he’s trying to watch the football, he reckons I do it on purpose every time there’s goin’ ta be a goal…’ The hoarse guffaw morphed into a chesty cough. The silence in the rest of the room managed to deepen.

‘You’re very welcome.’ Caroline modelled the hushed tone she hoped would prevail around the House once the intake had completed their orientation. She resumed her seat and turned her attention back to Gerald. ‘You were saying, Chief Secretary?’

Gerald offered her an almost imperceptible sniff by way of acknowledgement, and readdressed the room.

‘Your skills have been assessed on the basis of information provided on your personal profile forms. After lunch you will be assigned to a ministerial department and apprised of your duties by that department’s chief secretary. At that point you should inform your chief of any reason why you might not be able to fulfil our expectations, as outlined in your summons, of a member of this government, for the full term of three years. Are there any questions?’

For the first time since this session’s new motley shower had shuffled their way into the largest committee room of the House of Commons—and made a mess with their newspapers and smartphones and cups of coffee and bottles of water and ungainly coats—Gerald scanned the faces.

He wasn’t really rude, Caroline mused, although she’d been shocked at his attitude back with her first intake. The theatricality wasn’t just about intimidation or snobbery as she’d first thought; just boundary-setting. As Gerald allowed his focus to waft over the assembly, Caroline watched. And added to her notes. The ones who met his gaze, the ones who looked away, the fidgeters, the sniffers, the paper shufflers…

It was always an eye-contact-maker who asked the first question, determined not to be browbeaten by a mere civil servant. ‘What happens if you’ve assessed our skills wrong?’ Big guy at the back, Lancashire accent and a drinker’s nose. Caroline wrote, Predictable mind: Treasury? as she tried not to mouth along to the reply this inevitable question generated every time.

‘If you’ve been unable to express yourself adequately on your profile, we’ll find you something less significant to do.’

Queenie’s hands were still now, the knitting in her lap—what is that, some sort of tea cosy?—and her face a picture of misery. ‘Can I ask a question?’

She received a courtly bow. ‘Please do, ma’am.’

‘I can’t do anyfing…I dunno why I’m here. I mean hubby said we all got to do it and all but the thing said, the bit of paper said, that if you wasn’t good at stuff you’d, you know, go be one of the ordinary reps, just sit in a office and pass messages and such…’ Caroline added waffle to the line that had begun with knitting.

‘I mean I don’t mind doing my bit. I said to hubby, I said it’s nice and excitin’ to go and be the thing, especially after Tesco’s closed the tills and all but you talkin’ about skills, well it ain’t really right—’

Gerald raised his hand as though stopping traffic.

‘Fear not, dear lady, we have considered your case most carefully. Now, just before I send you all off for lunch, I should probably introduce Caroline Grant. She is your babysitter. And please know that all of you’—he nodded to the early questioners in particular—‘are currently babies. It’s her job to hold your hands while you learn, God help us, to run this country.’

Sue Vincent is a Yorkshire-born writer and one of the Directors of The Silent Eye, a modern Mystery School. She writes alone and with Stuart France, exploring ancient myths, the mysterious landscape of Albion and the inner journey of the soul. Find out more at France and Vincent. She is owned by a small dog who also blogs. Follow her at scvincent.com and on Twitter @SCVincent. Find her books on Goodreads and follow her on Amazon worldwide to find out about new releases and offers. Email: findme@scvincent.com.
View all posts by Sue Vincent →
This entry was posted in Books and tagged Book launch, book promotion, Brexit, excerpt, humour, political satire, rafflecopter giveaway. Bookmark the permalink.