Rick Sikes was a true pioneer of Outlaw Country music years before it ever had a name put to it. He packed out every club he played in and often talked about how he would draw the cowboys out of Round Rock, Texas and hippies out of Georgetown, Texas all together in the same place with no problems between them. Consider the time period of the 60s and this was most unusual.

I first met him on a hot August night in an after-hours club in Abilene, Texas. I’ll never forget how his presence caused quite a stir. My boss, Marketa, quickly rearranged tables and chairs to give him and his band the best seat in the house. I’d never seen her do that for anyone so I knew he was someone special. This part of our story is in my first book, Flowers and Stone.

When life made a harsh detour sending him to prison for many years, he was forced to take a long hard look at himself. First, he dealt with anger and bitterness because he’d been convicted of a crime he didn’t commit. Then, he wrestled with how he was going to do his time and considered several options which included trying to escape, before settling on the decision that changed him and his life forever. He made a committed effort to act, think and do only in positive ways although he’d been forced into a dark and negative situation.

This poetry and art book is a shining example of the man Rick Sikes became. He turned all of his emotions into writings and art. It became his salvation and the only way he survived the long hard years in prison without losing sanity.

That is what makes this poetry and art book different from thousands of others in print.

It was his hope that through his own experiences, he could be an inspiration to others facing difficult times.

Rick passed away in 2009. I am consumed with a burning passion to continue sharing his legacy and Discovery is part of that.

Below you’ll find a sampling of his art and poetry. I hope you enjoy it! 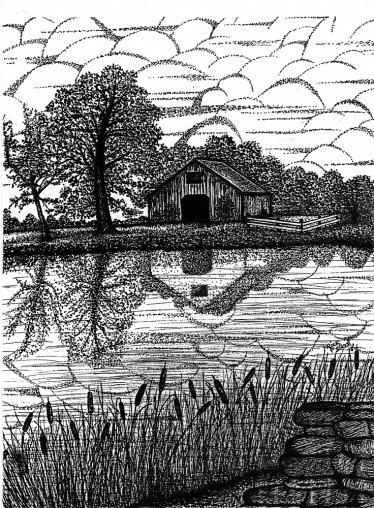 The artwork is sprinkled among the poems.

Here is an excerpt from the poem entitled Discovery:

Through life’s wilderness I wandered aimlessly seeking my way

Seldom looking up to see the light of day

Stumbling blindly, ‘til so weary, I could go no more

In total exhaustion I fell to the earthen floor…

This poetry book has everything from deep thought-provoking poems to humorous and quirky pieces.

Here is an excerpt from: The Title is too Damned Long or (When Aunt Bessie Rode a Bike to the Belly Dancer’s Ball)

Here is a story of a gal with gall

It happened a year ago this fall

When Aunt Bessie rode a bike

Aunt Bessie is past sixty-nine

She walked from the farm

Just in time to miss the train

She was mad as hell and soaking wet

But swore by heaven, she’d get there yet

She said, “It’s better late, than not at all

I’ll get there, if I have to crawl

This is gonna be a helluva dance

I ain’t gonna’ miss my chance.”

It’s no place for a red-neck square

Aunt Bessie was hitching just out of L.A.

Flipper skirt flapping, she thumbed on the freeway

Fifty bikers pulled up and asked, “You goin’ our way?”

Auntie Bessie said, “You got it. This must be my day…”

I invite you to take a closer look at this book and if it interests you, or you can think of anyone who might benefit from the inspiration of a man who found a way to be and do positive in a dark and negative situation, please pick it up!

Available at Amazon in hardover and paperback and at Barnes and Noble.

Jan Sikes started writing when she was a young girl, around the age of eight. Her first writing was a gospel song. She had an uncle whom she loved dearly, but he was an alcoholic and his drinking caused such family discord that at times, resulted in him being banished from their home. So, she wrote a song about Uncle Luke finding Jesus. That is her first memory of feeling the passion deep down to her toes for writing.

The stories she writes (so far) are true stories about the journey of two people moving through adversity in order to grow and learn to become better humans. She believes with all her heart there is something that is worthy of sharing in these stories. Bits and pieces of wisdom, hard-learned lessons and above and beyond all, love…True love that you read about in fiction stories and yet this is truth.
The old saying that truth is stranger than fiction fits the stories that she shares through her writing.She is passionate about her writing projects and is driven to tell a story with the hope that it might touch someone’s heart or life in a positive way.

Along with each book, Jan also releases a music cd of original songs that fits the time period of the story. Why? Because the stories revolve and evolve around a passion for music.

North Texas is where she calls home. You’ll often find her at Texas music festivals and has five incredible grandchildren.

Sue Vincent is a Yorkshire-born writer and one of the Directors of The Silent Eye, a modern Mystery School. She writes alone and with Stuart France, exploring ancient myths, the mysterious landscape of Albion and the inner journey of the soul. Find out more at France and Vincent. She is owned by a small dog who also blogs. Follow her at scvincent.com and on Twitter @SCVincent. Find her books on Goodreads and follow her on Amazon worldwide to find out about new releases and offers. Email: findme@scvincent.com.
View all posts by Sue Vincent →
This entry was posted in Books and tagged art, inspiration, music, poetry, prison. Bookmark the permalink.