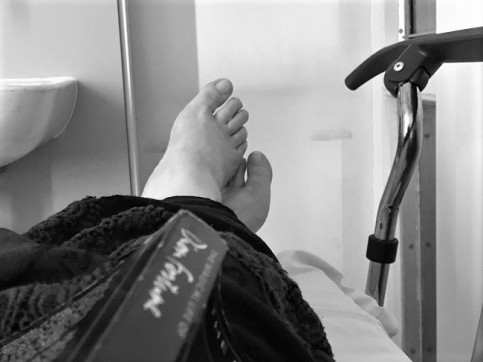 “… you have an appointment at ten for chemo…”

“Yeahs…” I view such calls with deep suspicion.

“We’ve been checking you blood test results…”  Were they going to cancel my appointment? Reschedule? Bearing in mind I was already on the brink of braving the morning traffic to get to the hospital on time… “Your cortisol levels are low…” Again? I wouldn’t mind if someone would explain why it matters. I know what cortisol is and does… but asking why the levels matter during chemo is generally net with a blank expression. “We need you to come in immediately. So we can get a morning test done…”

“That was a morning test.”

“…the readings are naturally different between eight and ten…”

“Half past nine in the morning…”

“so… if you could come in straight away…” I gave in and assured her I would leave immediately. And omitted to point out that I would probably not be much earlier than I would have ben had I left when I was ready.

I arrive, just a tad early. They draw blood and tell me I’ll have to wait for the results. They may need to give me steroids. They  may need to postpone the treatment. How long before I would know? Maybe half an hour. That’s not so bad.

Two hours later and I’ve had my pre-meds but no word… The uncertainty is worse than unpleasant. Meanwhile, no-one has the slightest idea why I am still swelling up like a balloon or when anyone is likely to attempt to find out. They did weigh me though. I’ve put yet another kilo on… oh joy. So much for weight loss in cancer and chemo…

Eventually, the overstretched nurses managed to get hold of someone in haematology who could give them some answers. My bloods were fine and the first of my three day cycle of chemo and immunotherapy could go ahead.

I watched morning turn to noon and finally watched the light outside turn to the dull grey of evening before I was done.  Meanwhile, the bags of extra medications, sharps bin and self-inflictable syringes pile up in my handbag and my cancer treatment book is whisked away to be updated.

It comes back with the next two appointments. One, mid-afternoon on New Year’s Eve to see my oncologist. I didn’t have any other plans… and would not feel comfortable complaining anyway when she and the nurses are working. The following appointment is for Twelfth Night… the next round of treatment.

“Just immunotherapy? This is the last cycle of chemo?” I prepare to dance an indecorous jig whilst still attached to the drip stand and oxygen.

“The doctor might decide to carry on with another two cycles. They usually do if it is working…” Which it does seem to be… yay!

“…and the immunotherapy will be for another eighteen months, I’m afraid….”

If I last that long…

So, I may have reached the end of chemo. Or not. I might have to have immunotherapy for another year and a half. Or not. I may eventually be investigated, or treated, for my Bibendum impersonation. Or not.

If I wasn’t already bald, I’d be tearing my hair out…

(Insert fingers in ears while I scream….)

…And if anyone wants to take up Mary’s suggestion to investigate the effects of uncertainty on cancer patients… I think the two of us between us could provide a decent start to the study….

Sue Vincent is a Yorkshire-born writer and one of the Directors of The Silent Eye, a modern Mystery School. She writes alone and with Stuart France, exploring ancient myths, the mysterious landscape of Albion and the inner journey of the soul. Find out more at France and Vincent. She is owned by a small dog who also blogs. Follow her at scvincent.com and on Twitter @SCVincent. Find her books on Goodreads and follow her on Amazon worldwide to find out about new releases and offers. Email: findme@scvincent.com.
View all posts by Sue Vincent →
This entry was posted in health and tagged cancer, chemo, immunotherapy, mental health, palliative treatment. Bookmark the permalink.