On the Doorstep: Weirdness in Bledlow… 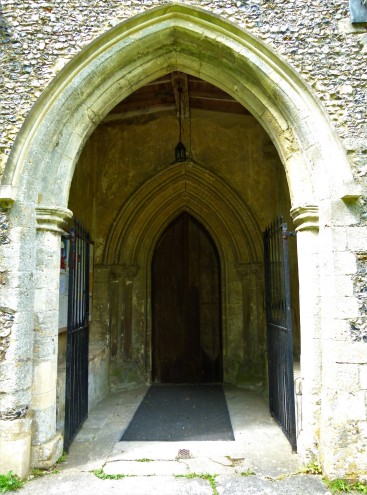 “We’re really close to the Church that we tried to get into before lunch the other Sunday but which was closed.”
“What, the one with the remains of a standing stone in the graveyard?”
“That’s the one.”
“Any particular reason why you think it might be open today when it wasn’t before?”
“Well, you never know.” We pull up outside the graveyard and halt level with the standing stone.
“Well, what do you know, there are lights on.” As we approach the South door, I can hardly contain my excitement and take the lead. I can hear voices within… there is some sort of tour going on in there.
“…and to your right, we have the South door which is the oldest working church door in Buckinghamshire…” I twist the door handle and lean into the door fully expecting it to open onto the interior of the church which it does not. “… since 1211… hold on a moment there… the door is barred. I’ll just open it for you.” There is a heavy thud from the inside of the church and then a scraping sound and slowly the door creaks open to reveal the aged but very friendly face of the tour guide. “… the door was barred, I’ve just unbarred the door for you,” he smiles and then nods knowingly and resumes the narrative of his tour. “Further to your left…”
I cast a cursory glance at his charges, three elderly looking tourists, two male and one female, who are doing their best to affect an air of nonchalant acceptance of our unscripted entry. I glance too at Wen who has skipped into the church and whose amusement is palpable. Suppressing my own mirth and sense of triumphalism at gaining entry to the church, I head for a most impressive stained glass window depicting our old friend George with his Dragon and Damsel and… I am instantly transported…

Extract from The Initiate

…And that was how we got into the church at Bledlow. We had tried before, unsuccessfully. I had also tried several times alone, when out and about for my job over the years.

The doors never stood open, and the main door, through which we had just entered, was also locked away behind metal gates. Even when we did make it inside, the tourist group that was already there had been obliged to come in through the little north door…

We, however, got the oldest door in the county unbarred for us… And, although that doesn’t sound like much, the sense being honoured was strange and moving. But not as strange as the experience one of us was about to have…

“Sire”
“…”
“SIRE”
I turn to the enquirer, imagining it to be one of the tourists and somewhat irritated that my reverie has been so rudely interrupted. But it is not one of the tourists, it is someone who I have never seen before. A small, weasel-like man dressed in rough leathers is standing at the front of the church just before the nave.
If this were not shocking enough, the church itself looks very different from the one I stepped into mere moments before. It is also ram jam full of people who are all looking intently at me, awaiting my response.
I turn back to the window hoping that the nightmare will abate but the window too has changed and, instead of depicting my beloved George with his blessed Dragon and lovely Damsel, it depicts a farmer sowing seeds upon the ploughed earth.
“Sire, the court is awaiting your response.”
I gulp… and turn… and start to walk down the centre of the church.
“My response?” I muster,  attempting to affect nonchalance. As I progress down what used to be the central aisle of the church, I notice out of the window that what remains of the standing stone is not a standing stone at all but a village cross. Next to the cross stands a hooded executioner sharpening his axe blade…

Extract from The Initiate

Sue Vincent is a Yorkshire-born writer and one of the Directors of The Silent Eye, a modern Mystery School. She writes alone and with Stuart France, exploring ancient myths, the mysterious landscape of Albion and the inner journey of the soul. Find out more at France and Vincent. She is owned by a small dog who also blogs. Follow her at scvincent.com and on Twitter @SCVincent. Find her books on Goodreads and follow her on Amazon worldwide to find out about new releases and offers. Email: findme@scvincent.com.
View all posts by Sue Vincent →
This entry was posted in Photography and tagged ancient door, bledlow, opener, sacredsprings, unbarring the door. Bookmark the permalink.

4 Responses to On the Doorstep: Weirdness in Bledlow…