On the Doorstep: Whitchurch ~ Shadow and Light

No visit to a rural village is complete without exploring the church, especially when these old places frequently date back to Norman times and beyond. Each one of them is not only a place of worship that has stood at the heart of its community for generations, it is also a time capsule crammed with the social history of the area, its art and artists, and memories of the great, the good and the lowly.

Sadly, the virus and the lockdown has closed the doors of our churches and, given that new ways have had to be found for the Church to reach out to its parishioners, we are concerned that many of the smaller, less well-known, well-attended or well-funded places may never reopen their doors. Covid will cast a long shadow…

Over the past years, Stuart and I have visited and documented hundreds of sacred sites and places of worship, creating a photographic archive upon which we have drawn for the blogs and our books, as well as a written record of our personal impressions for many of them.  We could not revisit the Church of St John the Evangelist at Whitchurch in person, but we could go back to that very first year of our adventures in the landscape and dig out the photographs… at least one of which was mentioned in Heart of Albion, our second book together. 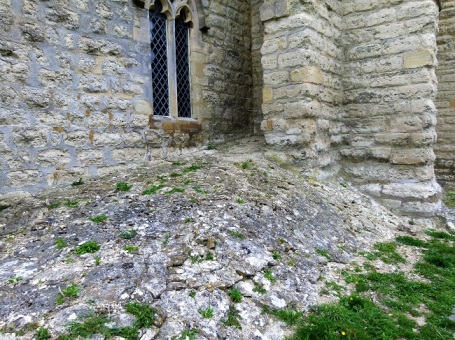 There has been a church on the Headland above Whitchurch since at least the end of the tenth century… and for who knows how much longer than that. The current church, though, dates only to the thirteenth century, with all the usual later alterations and additions.

Outside, you cannot help but be struck by the two apparently random upwellings of rock that appear to hold the fourteenth-century tower in their grasp. I have never seen anything quite like this before, and the nearest I have seen since is the rocky outcrop at St Clements on the Western Isles. But whereas the latter is natural, I have a feeling the mound at Whitchurch is man-made… as some kind of buttress, perhaps.

The hooded doorway, with its niche above and three heads is protected by a much later porch and you can trace the progression of the centuries through the styles and additions of each era. Many of these renovations and changes were paid for by the local gentry and were very much subject to the changing whims of fashion. 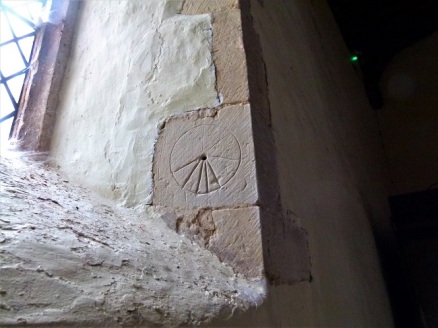 On that first visit, we knew nothing and had all this to learn. I can still rememberhow excited I was, finding yet another of the strange dials carved into the wall. We had worked out that it was some kind of mini-sundial…and probably used for marking periods of  worship. It was only later that we learned how common the scratch dials or Mass dials were in the mediaeval era. 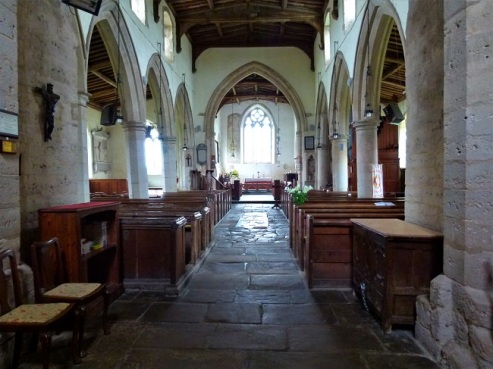 Whitchurch is a large church for its current village, but it was built to serve a population with a castle and a thriving industry, at a time when everyone went to church and was subject to its rule. 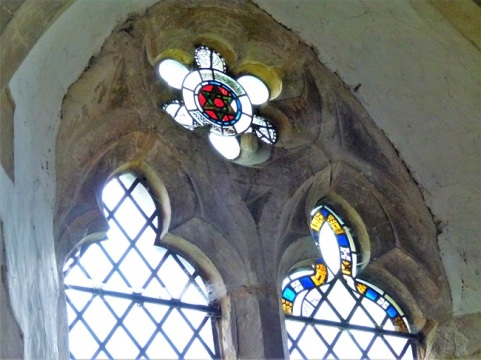 We wandered around, taking in details like the missing memorial brasses in the flagstones of the aisle, the traces of mediaeval wall paint and fragments of older glass lodged within the tracery of the windows. You have to wonder if Cromwell’s lot were responsible for smashing the glass here as they did at so many other ‘idolatrous’ churches throughout  the land… and realise that yes, they probably were.

The font is a curious affair, looking hugely top-heavy beneath its modern confection of a cover. And to inexperienced eyes, that was probably all there was to see. Which just shows how wrong you can be. Quite apart from all the details we had yet to learn about… like the difference between a sedilia and piscina… are all the things you can only learn by “being there.”

And sometimes, years later… researching the basics… you come across something that you had missed completely, that makes you squeal and means you really do have to revisit yet again… as soon as the church reopens. The local guides say the patterns were carved by Jesuits. Some of them look like the simple games that were played behind the pillars during boring sermons. The photographer and author of the article where I found the picture suggests the Templars… 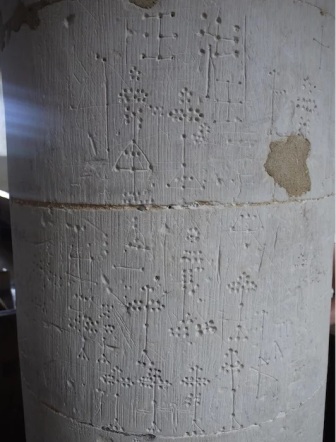 Copyright © Jerry Glover at Lost Grafitti of the Templars

And then your head is reeling with possibilities, thinking of the Templar holdings just half a mile away at Creslow… of the Headland and the Head Well and all the other Templar associations… and wondering this if all this is on the doorstep, why on earth would you need to go farther?

Sue Vincent is a Yorkshire-born writer and one of the Directors of The Silent Eye, a modern Mystery School. She writes alone and with Stuart France, exploring ancient myths, the mysterious landscape of Albion and the inner journey of the soul. Find out more at France and Vincent. She is owned by a small dog who also blogs. Follow her at scvincent.com and on Twitter @SCVincent. Find her books on Goodreads and follow her on Amazon worldwide to find out about new releases and offers. Email: findme@scvincent.com.
View all posts by Sue Vincent →
This entry was posted in Photography and tagged buckinghamshire, covid, going local, lockdown, pandemic, Whitchurch. Bookmark the permalink.

15 Responses to On the Doorstep: Whitchurch ~ Shadow and Light