Solstice of the Moon: The Field of Prayer 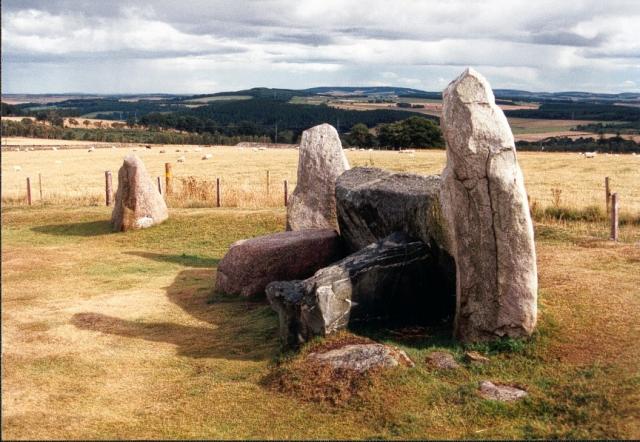 There were many merry meetings in Inverurie, bringing a golden glow to the afternoon that belied the grisaille of rain and wet stone. We were greeted outside our meeting place with fierce hugs from a lady we love dearly and who has been much missed over the past couple of years. Inside, there was the wonderful surprise of finding the Canadian contingent, and we had soon filled a fair proportion of the tea-room with laughter and conversation… there was a lot of catching up to do.

When all members of the party were assembled or accounted for, we set off for the short drive to our first destination. The circle sits on a hillside above the town with a small parking area a few minutes’ walk from the stones. By the time we arrived the steady rain had turned into a lashing downpour. I stowed my camera in an allegedly waterproof pocket for safety, where it promptly and irrevocably drowned. But that circle alone was worth it…and the weekend was only just beginning.

Easter Aquhorthies is one of the rare ‘recumbent circles’ found only in this small area of Scotland, and in the far south-west of Ireland. ‘Aquhorthies’ comes from the Gaelic; it may come from ‘auch’ or ‘achd’ meaning ‘field’, and ‘ortha’ meaning ‘prayer’ giving ‘field of prayer’, or be derived from ‘achadh choirthe’, ‘field of pillar stone’. If the sanctity of the site is preserved in its name, which is of a much later date than the circle’s creation, it would suggest that a recognition of its importance as a sacred centre long survived its builders. So too would its state of preservation…as if all later peoples understood or perhaps feared the magic of the place.

And it is magical. That first sight drew gasps from many of us. It is a truly beautiful site, even in the rain and even at first glance, appeared to be remarkably complete. Running Elk ushered us into the circle with instructions to find ‘our’ place within it. A place where we felt comfortable…or uncomfortable… and to consider why that might be. Two stones had stood out for me, even on the approach. I wandered around to the almost polished back of the huge recumbent and by the time I had finished exploring it, everyone seemed to have found their places. I stood by one of the flanking stones, hopeful that, even in the rain, I would be able to hear what Running Elk might tell us. I need not have worried on that score… not in this circle.

This circle is one of around ninety recumbents in this area and one of only a few to have retained all of its stones.  There are nine single standing stones in the circle and the recumbent stone itself, flanked by a pair of uprights. The recumbent appears to be chocked with further perpendicular stones, but closer inspection shows that they were not, in fact, designed as supports. Perhaps they have more to do with the acoustics of the circle… from where he was seated between the perpendicular stones, everyone in the circle could hear Running Elk perfectly. Yet, when he stood, his voice was lost in the rain. Later, we would discover that the voice could not carry outside the circle… one step beyond, and it disappeared into the breeze. 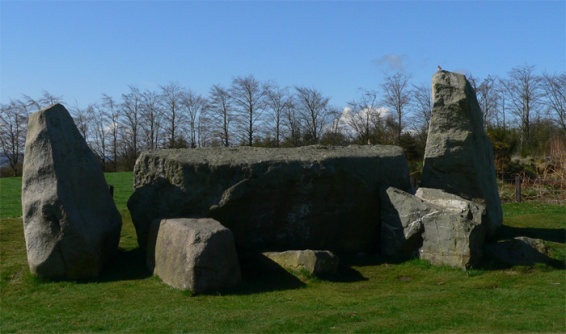 Somebody knew what they were doing with these stones. Yet Easter Aquhorthies has been dated to the Neolithic period, around six thousand years ago. Within its central space a boy-child was carefully buried in a cyst. We have seen this before. Running Elk suggested that the burial may have predated the circle, hallowing the space. We wondered why it always seems to be a boy-child and Stuart signalled that special bond between mother and son. With our daughters, we share our skills and experience of life; sons we raise to manhood and watch them leave our world for their own. And this circle was a place of priestesses.

Sue Vincent is a Yorkshire-born writer and one of the Directors of The Silent Eye, a modern Mystery School. She writes alone and with Stuart France, exploring ancient myths, the mysterious landscape of Albion and the inner journey of the soul. Find out more at France and Vincent. She is owned by a small dog who also blogs. Follow her at scvincent.com and on Twitter @SCVincent. Find her books on Goodreads and follow her on Amazon worldwide to find out about new releases and offers. Email: findme@scvincent.com.
View all posts by Sue Vincent →
This entry was posted in Sacred sites, Scotland, Solstice of the Moon, The Silent Eye and tagged Ancestors, balance, divie feminine, Easter Aquhorthies, Inverurie, lunar standstill, mother, Neolithic monuments, standing stones, stone circle, symbolism. Bookmark the permalink.

2 Responses to Solstice of the Moon: The Field of Prayer