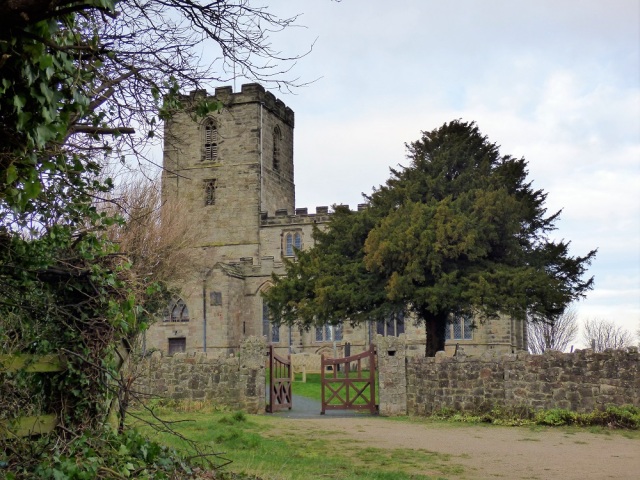 We entered through the porch door, surprised to find ourselves in a kind of antechamber. From the outside, there is no suggestion that you will be anywhere other than in the main body of the church and I had forgotten this detail since my first visit. 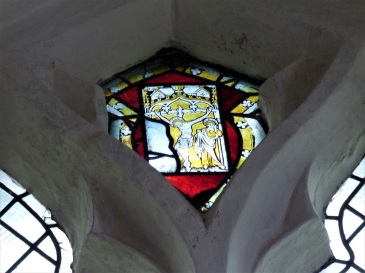 Not that it mattered… you don’t need to get into the church at Breedon before you start to notice the architectural details, relics of bygone ages and the first glimpses of carved stone. 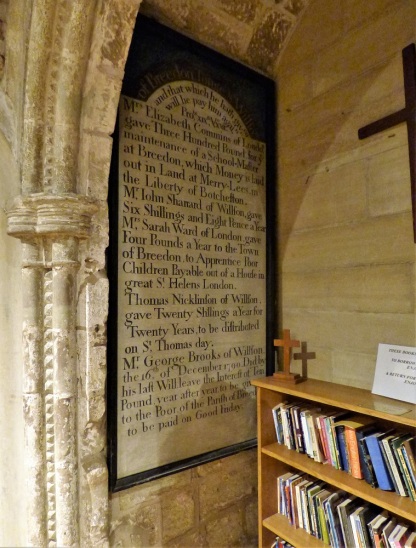 The antechamber is below the tower which dates back to the Norman Priory. At that time, this was the Crossing and the antechamber sits in in one of the arms. In an alcove that must once have been a doorway within the old Priory, there are boards detailing bequests made in the eighteenth century to pay for school masters and apprenticeships, as well as gifts to the poor of the parish. 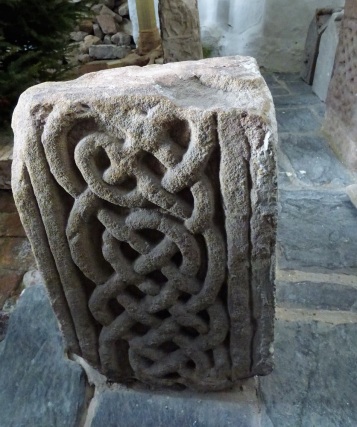 Although a Norman church would have been a good place to visit… and the Augustinians founded Breedon Priory in 1120, the church here has roots that go far deeper. The land at that time was given to the church by Friduricus, who is one of the four saints buried at the church in some lost crypt. 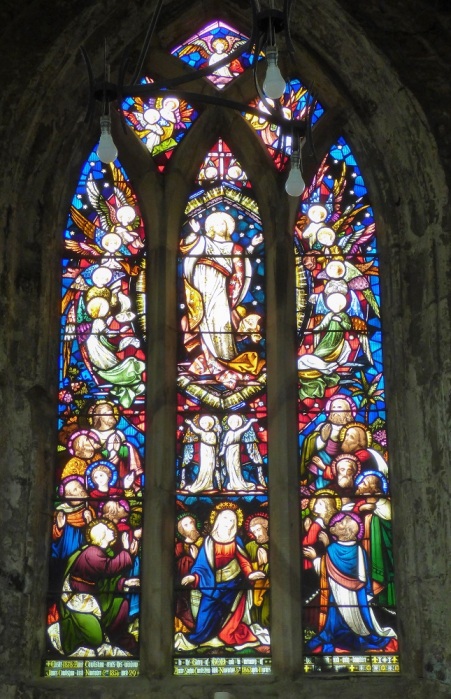 Before the Priory, the site was home to the Benedictines, whose Holy Hill Monastery was founded in 676 by Aethelred, the third son of Penda, the last pagan king of Mercia. Parts of the nave date back to this time and many of the treasures we had come to see are from this era. 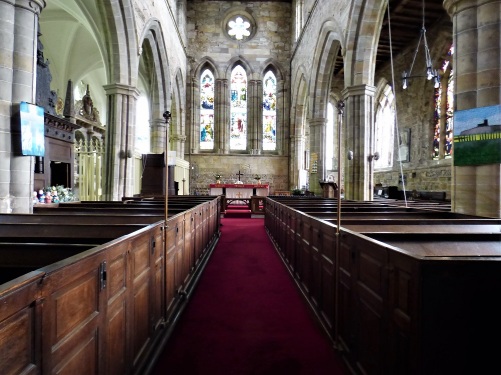 But before the Benedictines, there was a hermitage… and before that, there was probably a pre-Christian sacred site on ‘Holy Hill’, going back well over two thousand years. To say that you can feel the  hum of history through the soles of your feet may seem a little fanciful, but it is true. The sanctity of the site,  hallowed by centuries… perhaps millennia… of prayer, is palpable. It seems to transcend religious dogma and speak, heart to heart, of the human quest for understanding and our search for a Light that has taken many forms and worn many stories, but which is always the same. 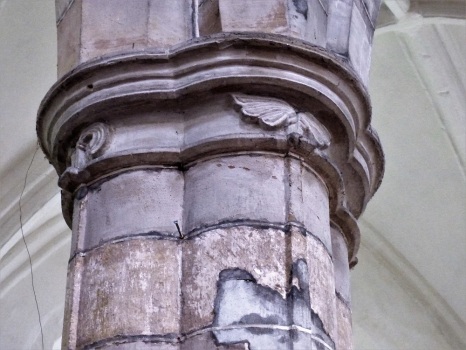 There are many stories in this little church, some carved in stone, alabaster and wood, others blazoned on glowing stained glass. At first glance, it seems a fairly simple place. The nave seems too large and spacious for such a small floor space… a reminder that the Priory was once a much larger building. But, small though it now is, once you walk through the doors, there is no corner that does not hold something to take your eye and interest. 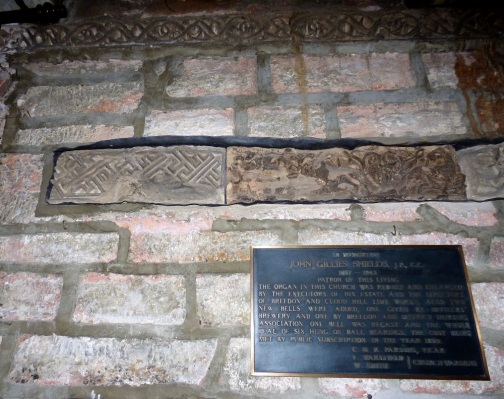 The baptistry, beneath the low ceiling of the tower, holds carved stones set into the walls. Their patterns are too random to be part of the architecture of the times; they are probably part of the Saxon church and as such, much older than the tower.

The fifteenth century font is octagonal and each face holds a different geometric symbol. Some of these are reminiscent of window tracery, others remind you of designs seen on contemporary grave slabs…and others look like symbols more familiar in magical circles than Christian ones. Between the font and some of the other details in the church, I felt obliged to check where the nearest Templar Preceptory had once been… and found it just fifteen miles away. 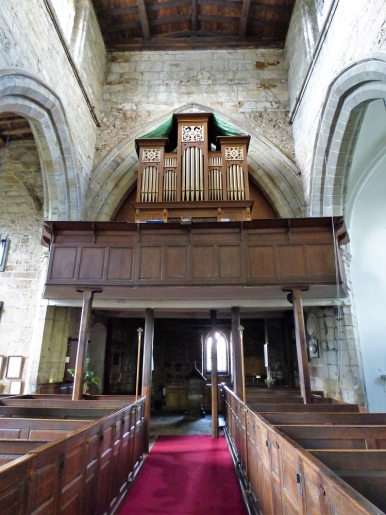 The organ sits above the baptistry on a bowing gallery held up on stilts. The whole thing looks rather precarious and rather incongruous too. All the proportions in this little church seem wrong. The nave with its clerestory seems far too high, the floor too crowded, the baptistry… a least as important as the altar in Christian worship… far too dark and low. And yet, somehow, it all feels right. 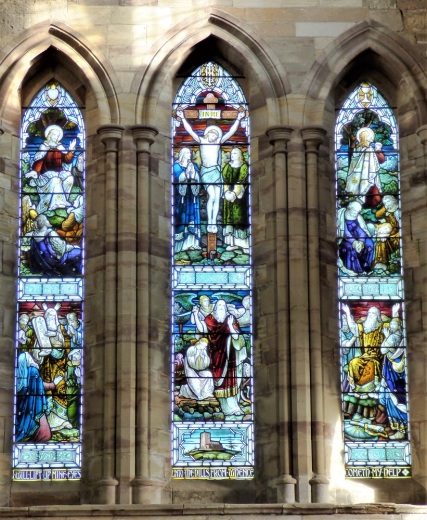 There is a stunning stained glass window in the east. Made in the nineteenth century, it shows scenes from the Old Testament  and the life of Jesus. Above it there is a small window showing Christ in Majesty. 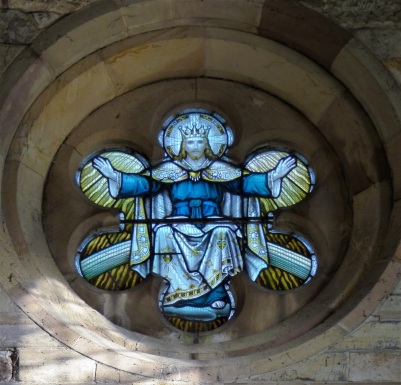 On the north wall, a fabulously colourful window casts its light over the nave, while in the south aisle, there are fragments of older glass, including one panel showing St Thomas examining the wound on the side of the risen Christ. 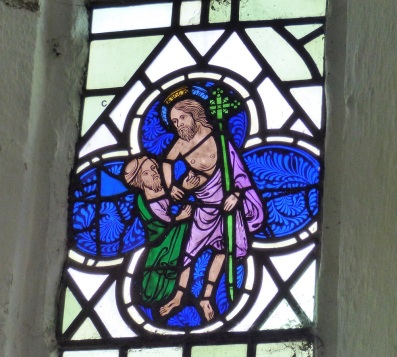 It is a wonderful church to visit, with the tombs of the north aisle worthy of a post of their own… and that is without the stones we had really come to see. There is still a sense of community here… this is a working church that remembers the history of its people, not just a showpiece. 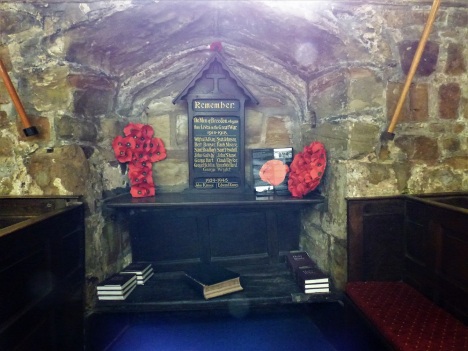 One of the details of its modern history that stood out was the Icon of the Holy Face. Based on the Mandylion, it was painted by iconographer, Helen McIldowie-Jenkins. We had seen another possible rendition of the Mandylion on our travels a few months earlier, a much older one… the Templar Head. On that same trip, we had also met Ikon John, and found his works in many of the churches we had visited. Perhaps there was something afoot? We would have to wait and see. For now, there was still plenty to occupy our attention… 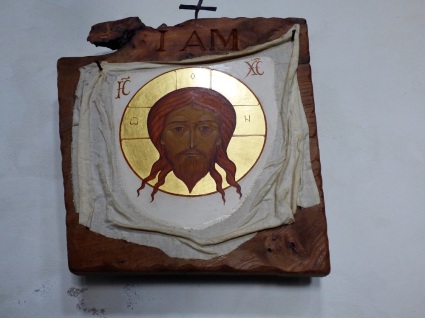 Sue Vincent is a Yorkshire-born writer and one of the Directors of The Silent Eye, a modern Mystery School. She writes alone and with Stuart France, exploring ancient myths, the mysterious landscape of Albion and the inner journey of the soul. Find out more at France and Vincent. She is owned by a small dog who also blogs. Follow her at scvincent.com and on Twitter @SCVincent. Find her books on Goodreads and follow her on Amazon worldwide to find out about new releases and offers. Email: findme@scvincent.com.
View all posts by Sue Vincent →
This entry was posted in albion, ancient mound, Ancient sites, Churches, Don and Wen, England, france and vincent, History, Photography, symbolism, Templars and tagged archaeology, breedon on the hill, Church of SSs Mary and Hardulph, icon, Mandylion. Bookmark the permalink.