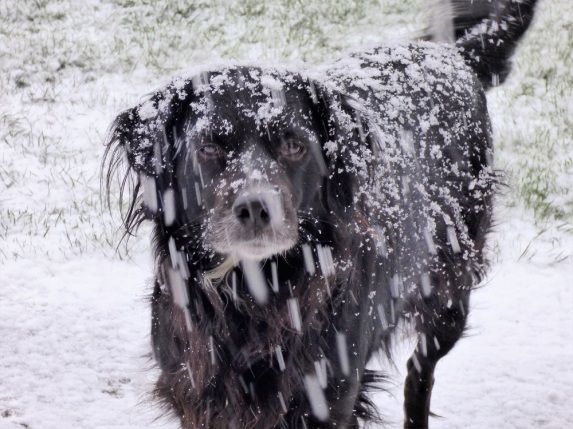 So, a week to go till turkey time and she’s still looking like something the cat dragged in and promptly dismembered. I’m twiddling my paws, wishing she would hurry up and get well, ’cause, frankly, the fish are no fun to play with and, since we got that new tank, I can’t even get my head in there any more…

She seems to think the fish will be glad about that, but unless I can get in there, they are just like interactive TV…or maybe we are for them, not sure ’bout that…

I have talked to her about how much easier two dogs would be, ’cause we could play and leave her in peace… but she says we are not allowed and the fish will have to do. Okay, I have them trained and they play rugby with the fish pellets instead of a ball, but it really isn’t the same.

The only other thing I can do is keep the intruders out of the garden. And we have a lot of them. That Christmas song, about the gifts? Yeah…

‘In the bored days near Christmas my two-legs said to me:
“My head is thrumming
Pawprints need wiping
Wish I was sleeping
Will you stop prancing…”
Yeah, she is milking
‘Cause her head’s swimming
We should be playing
With bouncy things!
I’ll just chase the birds
See off wrens
And you know I love…
That whole flock of pigeons in our bare tree!’

See how bored I am? I need visitors… Wonder if the two who look after Trent McDonald would like to come and play?

A Letter from Fiyero and Idina

We decided to get onto Dad’s computer when he isn’t looking.

Truthfully, we hate computers.  Don’t you? Mom and Dad, our two legs, sit in front of these glowing screens all of the time.  I think there is something in the screen that makes two legs turn into zombies.  Anytime they get behind that screen they ignore us and don’t let us out to play!

We have told Dad a million times that it is time to play.  Finally he listens.  Or so we think.  He gets up, gets his coat, hat and gloves on.  We begin to get excited! And then do you know what he says?

A walk? Yes, we love walks at the right time and the right place, but we do not get enough play time.  We need to sniff the entire parameter to ensure there have been no intruders.  You know the routine.

Then we need to fight.

Yeah, and I always win.

Only when I let you.

Ani, I’m sure I don’t have to tell you that I’m the Alpha in this pack.  It’s the female’s place.

Only because I don’t complain when she plays pack leader.  Ouch, quit biting!  You’re being what the two legs call “bad”!

Mom and Dad keep threatening us with a fat man.  “Fiyero and Idina!  Who did this?  Santa’s watching, you know.”  Do you get that?  Stupid two leg thing.  Almost as idiotic as their concept of “good” and “bad”.  They say dumb things like this fat guy, Santa is going to break in with a sack on his back.

If a fat man tries to enter our house, well, he won’t try a second time!  If he puts anything into that sack of his, I’ll bite him!

We know how to deal with intruders in this pack!When we think there is an intruder, we have a system.  Idina goes to the main door, the only one anyone ever enters, even if the noise came from the opposite side of the house.  She loudly tells the suspected intruder that they are not welcome.  Fiyero goes up and finds Dad, usually sitting at his computer.  Of course Dad’s eyes are glazed, his mouth partly open as he drools.  Yeah, a computer zombie.  But Fiyero knows how to rouse him.  He barks at him until Dad gets up and follows.  If Dad slows down, Fiyero barks again.  When he gets to the door, Idina moves out of his way, but continues to growl.  He will walk outside and make sure the evil one doesn’t enter.  Nobody ever has!  Idina has scared them all away.

I’m not gloating, I’m taking my due praise the way I should.

Yeah, well you’re just a b… Ouch, that was my leg you just bit.

I wanted to prove who is Alpha.Oh yeah?  Do you want to step outside and settle this?

Sounds fun to me!  Dad!  We need to go outside and play!

What?  Walk?  No we don’t want a walk.  Exercise?  We get plenty when we play!  Potty?  Who has time for that when you are playing!

Bye Ani.  It looks like Dad wants to reenact that seen from Dr. Zhivago where he is forced by the partisans to walk across the frozen tundra of Siberia!

But Fiyero, there will be plenty to sniff….

About Fiyero and Idina’s two legs

I never decided what I wanted to do when I grew up. I compose and play music, draw and paint, take a lot of pictures, and yes, I write. I’ve written a couple of books that are sitting on my shelf waiting to go out and I write a new short story almost every week, which I often post on my blog, trentsworldblog.wordpress.com. I’ve collected some of the best short stories I’ve written and put them out as “Seasons of Imagination”.

I also like to eat, so I work as a computer nerd during the day while I figure out what it is I really want to do.

If you really need details, I was born and raised in Ohio by the shore of beautiful Lake Erie and now split my time between mountainous New Hampshire and the coast of Massachusetts.

One thing to know about me is that I hate to write bio-blurbs in the third person.

Find Trent’s books on Amazon in paperback and for Kindle

In the shadowy area where myth and history collide, an unlikely hero is forced to save the world from an ancient Celtic curse. Dr. Elliot Everett-Jones knows that shadowy area well, having spent most of his life exploring its dimensions as given by a host of unreliable sources and imaginative speculation. Some would say he daydreams over the improbable plots of second-rate Romantic era authors. These fantasies, however, come to life after the discovery of the Cauldron of the Dead. When the Cauldron produces the evil fireborn, Elliot is forced to confront an army of these mythic undead with nothing but his obscure knowledge and the hope of finding the legendary Lady of the Lake to give him Author’s sword. Even more frightening is the idea that he might have to confront his ex-wife, Eleanor. “The Fireborn” is part joyful romp through history, myth and legend, and part fast paced adventure set in modern England and New York. The entire book, though, revolves around Elliot’s relationships with a large variety of characters. These relationships form the key that may unlock the mystery or lead to utter defeat.

An eclectic mix of stories covering many places, times and even different genre, yet they all hold one thing in common, they are all about people.  Be they silly, serious or speculative, all of the stories are about us.  What makes us tick?  Why do we say the things we do?  Why do we react as we do?

So whether it seems the stories are exploring outer or inner space, in reality they’re always exploring the human space.

The day should have been a normal “family day” at the Hawkins’ Mausoleum, but a premonition followed Trevor into the crypt. To make matters worse, he couldn’t shake his morning vision of a dead woman draped in a funeral-shroud.

After rescuing a girl trapped in the tomb, repressed memories forced him to reevaluate everything. Was his extended family a cult with roots going back to America’s colonial past?  Was the evil Benjamin Halley still stalking his tomb after 150 years? Was there any truth to the Power described by the family’s patriarch, Miles Hawkins?

Trevor realized that he was being manipulated and drawn into a trap set in the 19th century, and feared that everyone around him had already been ensnared.  Who could he trust?  The members of his own family’s Branch, The Bradford’s, like his cousins Bill or Stan?  Perhaps members of the Hawkins Branch, such as the beautiful but jaded Amelie?  The one Branch he knew not to trust was the extinct Halley Branch.

But the Halley’s were the ones who were welcoming him with open, if dead, arms. 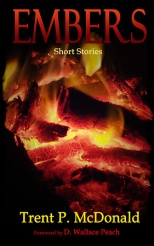 Meeting at that corner of time where day and night become one, where dreams and reality mix, let’s stir the coals of that fire called ‘imagination’ to discover an eclectic mix of short stories. Each story is a bit of frozen flame, an ember, that can flare up in your mind.
These embers form a collection of “tales that cover a wide range of genres, moods, and characters, from heartbreaking and heartwarming trials of love and family to thought-provoking journeys into the future. Most importantly, the stories are peopled with richly-drawn characters gifted with unique voices, emotional depth, and the power to capture the imagination. They’re stories that will stick.” – Author D. Wallace Peach
So whether you only have time to warm yourself with a very short work of flash, or you want to get cozy and lost in a novella, there is a story, an ember, in here for you.

Sue Vincent is a Yorkshire-born writer and one of the Directors of The Silent Eye, a modern Mystery School. She writes alone and with Stuart France, exploring ancient myths, the mysterious landscape of Albion and the inner journey of the soul. Find out more at France and Vincent. She is owned by a small dog who also blogs. Follow her at scvincent.com and on Twitter @SCVincent. Find her books on Goodreads and follow her on Amazon worldwide to find out about new releases and offers. Email: findme@scvincent.com.
View all posts by Sue Vincent →
This entry was posted in Ani's Advent Calendar, Dogs, Photography and tagged Books, computers, fiction, rivalry, short stories, walks, zombies. Bookmark the permalink.