The Wyrm and the Wyrd: A tomb with a view

We weren’t lost exactly. We knew exactly where we were. Back in Betws y Coed, where the falls tumble with such speed and grace they were named for the swallow. We had just come through there… and on a hot Sunday afternoon, it is  full of tourists and the narrow streets make turning around a bit on the dodgy side. The trouble was, we needed to be beyond the town, up in an unnamed field, somewhere on a farm outside the village of Capel Garmon. We found the village… eventually… but no signposts. As an act of faith, we set off in the opposite direction, hoping we would stumble across some indication of where we wanted to be…

Sure enough….’burial chamber parking’… we pulled into the slight widening of the narrowest of lanes, hoping its empty state meant we would get the site to ourselves. Through the farm gate, past the guardian collies outside the farmer’s door, down a long winding hill… over another field in the general direction of a pile of hopeful looking rocks and… “Oh, good grief!”.

Little shows above ground of the tomb… it remains below the level of the earth. It is of the Cotswold-Severn type of tomb, named after the places they are usually found. Finding one in Wales is unusual. The perimeter of the original mound is marked out in stones that trace the path of fine masonry walls now buried. While it still holds to the trapezoidal shape of the prehistoric axe, we could not help thinking that the central chamber, connected to the outer walls by a now-blind passageway, looks awfully like a baby in the womb, connected to its mother by the umbilical cord…

What we could see was spectacular… as was the view across to the mountains. The site would once have been fully covered with huge capstones, of which only one remains, and buried beneath a mound of pale stones. The remaining capstone was damaged when a farmer, already using the tomb as a stock shed for his beasts, tried to blast it to bits… without success. It is enormous, but bears a circular scar from the explosives and is now given support by modern concrete beams.

From the centre of the tomb, looking ‘out’ down the southern passageway.

The original entrance would have been by way of the narrow passage to the south, which is around fifteen feet long, once roofed but now open to the sun. There appear to be two large slabs of slate blocking the original entrance and, as you walk inwards, there is a narrowing, a constriction by two stones placed at the entrance to the central chamber.

Looking ‘in’ up the southern passageway, to the constricting stones.

A ‘blind’ entrance to the east lies within the indented section of the perimeter, between the two ‘horns’ and blocked by a huge stone that remains in place.  The shape of this area and its resemblance to female anatomy is striking.

We walked around to the west where the modern entrance now lies. The original standing stone that completed the wall was removed by the same enterprising farmer who tried to blow the roof off. He fitted a framed window and door into the gap and who knows what was lost when he did so.

The eastern chamber and passage, with part of the western capstone.

An excavation in 1927, when the chamber was restored, produced very few finds…to be expected after the mistreatment of centuries. Sherds of Beaker pottery were found along with worked flint flakes and a fragment of Neolithic pottery. Other finds in the area, though of rather later date, have been somewhat more spectacular. 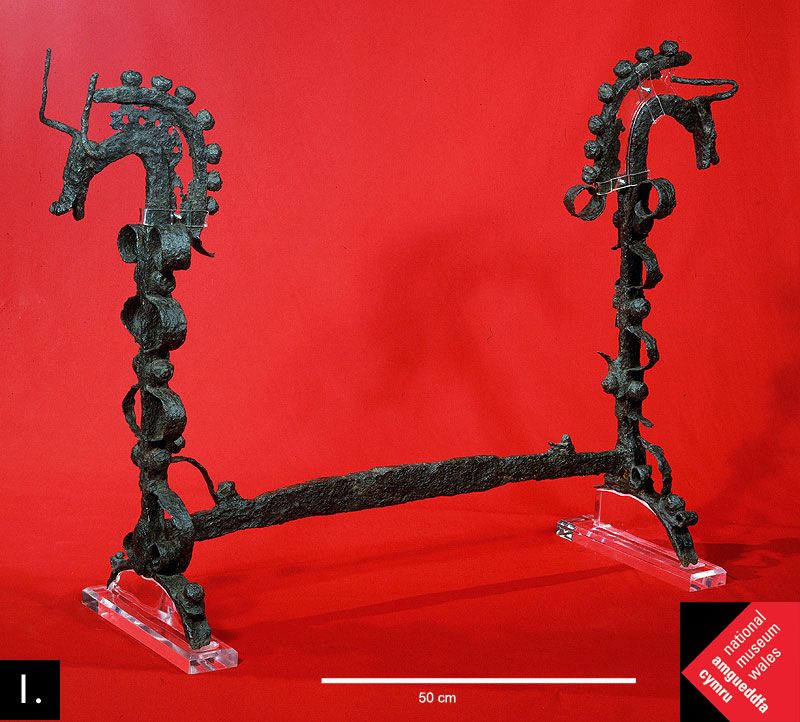 The Capel Garmon firedog was found in 1852 by a man digging in a peat field. It is a fabulous piece of artistry and would have been one of a pair of incredibly worked supports for the logs of a fire in a chieftain’s roundhouse. It has been estimated that the work involved in crafting them would have taken a master-smith up to three years.  X-rays have revealed that the single firedog found was made in eighty-five pieces and would have originally weighed around eighty-four pounds. 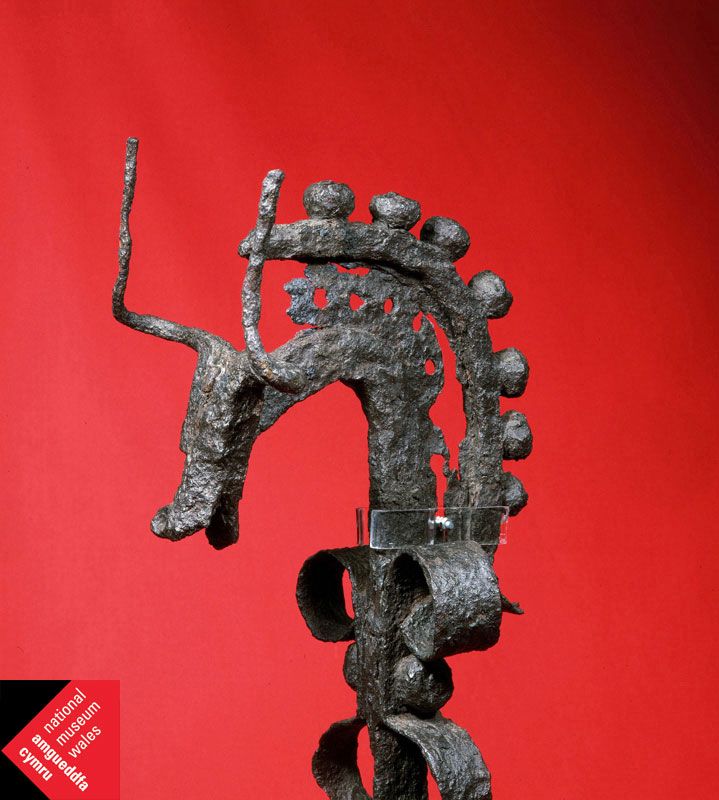 It is not known whether the creature depicted on the firedog is a horse, bull or some creature of myth. What is know is that this would have been an extremely valuable object when it was crafted. The production of iron, drawing metal from stone, was seen as magical and because of the way in which it was found, deeply buried and protected by carefully placed stones, it seems to have been deliberately interred, perhaps as a votive offering to the local goddess. While there is no definite dating material, comparisons to similar firedogs in chieftain’s burials of south-east England date its creation to some two thousand years ago.

The burial chamber, though, is much older… dating perhaps as far back as five and a half thousand years and just as beautiful in its way. These were houses of the dead and, if the resemblance to a child in the womb is not fortuitous, places where the dead were laid, not to simply rest, but to come to rebirth.

We finally entered the chamber, knowing that this was never the original entrance, but grateful for the cool of the tomb in the blazing heat. It is a place of deep silence, far enough away from the modern world to lose the traffic noise and the hum of civilisation. Only sheep provided background noise in a place so still we could hear the tearing of the grass as they fed.

We sat in the shadows, marvelling at the stones. Faces and forms, human animal and otherworldly, reveal themselves as you allow your eye to dance across their surface. You do not feel alone in these places and, in spite of our modern avoidance of death and dying, they are strangely welcoming and homely.

“I saw that God never began to love us,” said the bibliomantic reading we took, “We have always been in God’s foreknowledge, known and loved from without beginning. We were made for love.” The words of Julian of Norwich seemed strangely apposite. This was the light reading… “what can be seen in a given situation, the dark is what has to be intuited.”

“God is nearer to us than our own soul,” said the second, shadow reading from Julian, “and God is the means whereby our Substance and our Sensuality are kept together so as to be never apart.” In a tomb designed for the body of the sense and the essence of the soul, that too seemed more than appropriate.

We were in no hurry to move and would have happily stayed there all night had the farmer been likely to be amenable. We spent a long time getting the feel of the place and getting to know its stones. For once, I wished I had done some research before arriving… yet I find now there is little available anyway outside the covers of books and we had not originally planned to visit Capel Garmon. It had just seemed like a good idea on the day.

Other than the factual side of archaeology and the theories propounded about these sites, somehow, I think that feeling your way teaches you more. Did any of the stones align with the land or the stars? I would have liked to see the sun set behind the mountains to see whether their contours aligned with the stones… though at which point of the year it might do so, mid-summer or midwinter, we did not know.

When we left it was reluctantly…and not far… wandering to a mound in a nearby wood and sitting once more beneath the trees, wondering and feeling the spirit of the place. These are not just archaeological curiosities, remnants of a distant past. They are our past… and, given the time that has elapsed since bones were last laid here, and the scope of human expansion as we have colonised the far-flung corners of the globe, those who were once laid here may be ancestors to any one of us

No tree will grow unless it has its roots deep in the earth and that applies equally well to the family tree of humanity. We cannot live in the past, but we do live with it… and when, as it does at these ancient and beautiful places, that past teaches a love and reverence for those roots, we can only learn to tend them and grow. Eventually, though, the past must be left behind and the future faced. We still had nowhere to stay that night, but we did have an idea of where to go next…

Sue Vincent is a Yorkshire-born writer and one of the Directors of The Silent Eye, a modern Mystery School. She writes alone and with Stuart France, exploring ancient myths, the mysterious landscape of Albion and the inner journey of the soul. Find out more at France and Vincent. She is owned by a small dog who also blogs. Follow her at scvincent.com and on Twitter @SCVincent. Find her books on Goodreads and follow her on Amazon worldwide to find out about new releases and offers. Email: findme@scvincent.com.
View all posts by Sue Vincent →
This entry was posted in albion, ancient mound, Ancient sites, History, mystery, Photography and tagged burial chamber, Capel Garmon, Don and Wen, nature, stone circle, Stuart France and Sue Vincent, travel, Wales. Bookmark the permalink.

25 Responses to The Wyrm and the Wyrd: A tomb with a view