Of Ash and Seed- Offerings

“The druids – that is what they call their magicians – hold nothing more sacred than the mistletoe and a tree on which it is growing, provided it is a hard-timbered oak…. Mistletoe is rare and when found it is gathered with great ceremony, and particularly on the sixth day of the moon…. Hailing the moon in a native word that means ‘healing all things,’ they prepare a ritual sacrifice and banquet beneath a tree and bring up two white bulls, whose horns are bound for the first time on this occasion. A priest arrayed in white vestments climbs the tree and, with a golden sickle, cuts down the mistletoe, which is caught in a white cloak. Then finally they kill the victims, praying to a god to render his gift propitious to those on whom he has bestowed it. They believe that mistletoe given in drink will impart fertility to any animal that is barren and that it is an antidote to all poisons.” 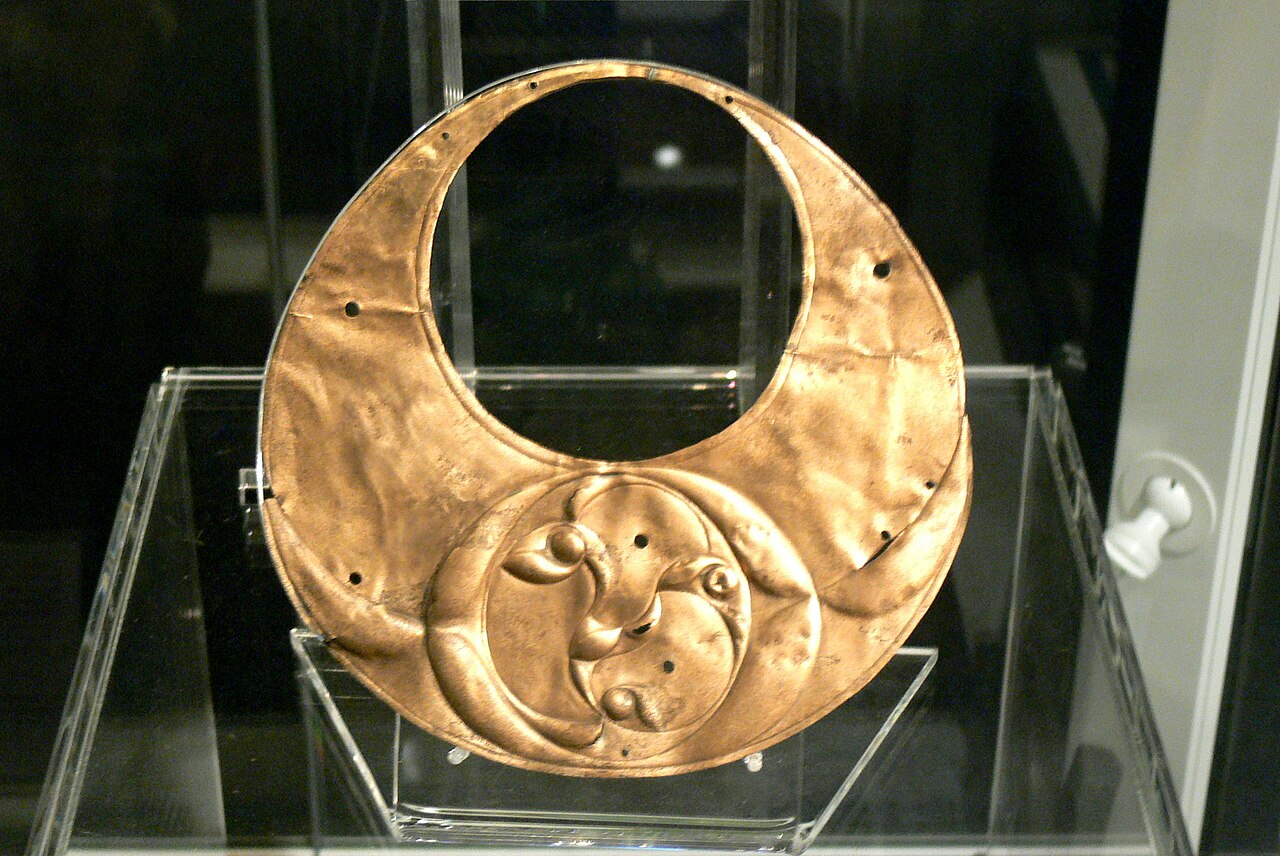 Although  we still bring the blessings of mistletoe into our homes at Christmas, there was no mistletoe at Bryn Celig Bach, only a sickle moon, with Venus, seen always as the light of a goddess, shining below. Copper has been seen as the Mirror of the Goddess for centuries. It may be that is one of the reasons why copper was found in the peaceful lake that is now surrounded by an airforce base. In 1943,  William Owen Roberts, a green-keeper at the local golf course, spotted a chain in the mud as the work began to dredge a pond on the airforce base. A lorry became stuck in the mud and, remembering the chain, he picked it up and attached it to the vehicle. The used it several times that day and it did not break. It was not until a drawing of it was sent to the museum in Cardiff that it was identified as a gang chain, used to chain five slaves together by the neck.

Over the next four years, locals found many other objects at the site and Roberts took responsibility for them wrapping them in sackcloth and keeping them safe through the war years. Eventually they brought a veritable treasure trove of 181 artefacts into the light. The objects, many of bronze and copper, dated from 300 BC to around AD 100. They seem to share a common and warlike thread in many cases and it has been suggested that offerings to the gods were made here in times of war. It has even been proposed that a mass offering was made here by the Druids when they knew that Suetonius Paulinus was coming to obliterate then in AD 60.

Many of the items, that included items as diverse as swords, cauldrons and a bronze trumpet, had been deliberately broken and, as we approached the lake in the gathering twilight, we discussed the possible reasons behind this. Was it the act of placing the treasured item beyond reach and use that constituted the true sacrifice? Or perhaps, by ‘killing’ the item in an echo of a bloodier sacrifice, they released its spirit, offering it to the gods and allowing its power to work for them in the Otherworld.

Sue Vincent is a Yorkshire-born writer and one of the Directors of The Silent Eye, a modern Mystery School. She writes alone and with Stuart France, exploring ancient myths, the mysterious landscape of Albion and the inner journey of the soul. Find out more at France and Vincent. She is owned by a small dog who also blogs. Follow her at scvincent.com and on Twitter @SCVincent. Find her books on Goodreads and follow her on Amazon worldwide to find out about new releases and offers. Email: findme@scvincent.com.
View all posts by Sue Vincent →
This entry was posted in Ancient sites and tagged Anglesey, druids, history, Holy Island, Photography, sacred sites, spirituality, symbolism, The Silent Eye, Wales, weekend workshop. Bookmark the permalink.

2 Responses to Of Ash and Seed- Offerings