Aquae Sulis… the waters of the Sulis… that was the Roman name for the city of Bath. It is easy to understand why when, since time immemorial, a hot and mineral-rich spring has welled from the ground; the only hot spring in Britain. We didn’t visit properly this time, though I have in the past, but we did see the King’s Pool with its statue of Bladud and the strange stone chair that juts out from the wall over the steaming pool, that was the designated seat of the Master of the Baths.

You can no longer bathe in the waters here as was once the custom, largely because the water is still chanelled through the old Roman pipework made of lead. That is something of a marvel in itself, as the Romans first stared building the temple here, with the sacrd spring at its heart, around 60AD and added to the complex over the nest 300 years. Even so, what remains is over seventeen hundred years old and a fine indication of  the glories of a Roman bath house. Close by, however, there are facilities to both drink and bathe in the waters, long considered therapeutic, with the water now flowing through modern plumbing.

The spring and baths are hidden behind and below the elegant facade of a later era. Bath rose to popularity many times over the centuries, becoming a fashionable watering place or spa town and each era has left its mark. Yet  the spring is older by far than those whose stones and mortar now enclose it.

There was already a shrine to the Celtic goddess Sulis at the spring, long before the Romans came. From the many offerings and inscribed tablets found here, it would seem that she was seen as a healing and nurturing mother-goddess, while her name suggests some connection with the eye or the sun. Perhaps there was something of both… the two go together, and perhaps too we can imagine that there might have been seers at the Sacred Spring… those who see by a different light than that of the physical sun.

Instead of ousting Sulis when they came and replacing her with a Roman deity, the Romans saw her as Sulis-Minerva and added wisdom to her gifts… or recognised, perhaps, that her nature was similar to that of their own goddess. A beautiful gilded bronze bust was found in 1727 depicting the the Romano-British deity.

On the front of the Roman temple was the huge plaque now described as a Gorgon because of the entwined snakes of his hair and beard. I am no scholar, but all the Gorgons I know about were female… and they didn’t look quite so solar…or have wings in their hair…He looks solar to me, or perhaps combines all the elements of earth, air, fire and water in the symbol. In fact, if I wasn’t going to opt for a solar deity, then rather than a Gorgon, I’d say he looks more like our Green Man. 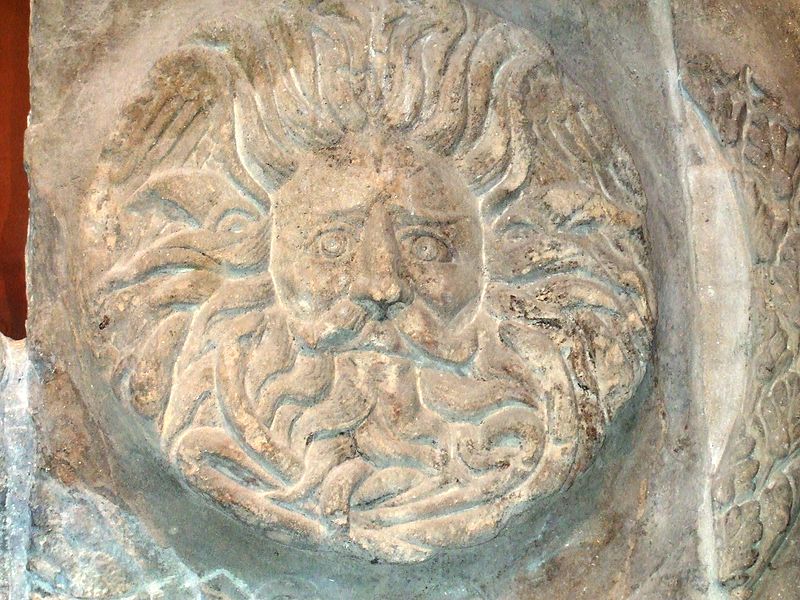 Or maybe he is at least partly responsible for the legends surrounding Bladud, the legendary King of the Britons. Bladud, whose name may come from the Welsh for ‘wolf-lord’, has left no trace in history and may never have existed before Geoffrey of Monmouth’s truly fabulous Historia Regum Britanniae, where he is named as the father of King Lear. Amongst other feats, he is said to have been the founder of Bath and, by magical arts, raised the temple, dedicating the healing waters of the spring to Minerva and supplying it with an ever-burning flame because of his pigs.

The legend tells that Bladud had contracted leprosy whilst studying in Athens and was exiled from the court on his return home. He took up a position as a swineherd and noticed that the pigs who rolled in the warm, black mud suffered no skin diseases. Doing likewise, he was cured of the leprosy and restored to his position as future king. He died when the wings he had made for himself with his arcane arts failed… Earth, air fire and water…and wings… Sounds awfully like the Gorgon.

While Bladud may be no more than a myth, there is plenty of real and tangible history here, from the Roman structure itself, to the statuary, the mosaic floors and the finds. Over 130  curse tablets have been found, largely invoking the wrath of the goddess against thieves operating in the bath-house. Sherds  of fine Samian ware, an expensive commodity, small metal ladles used for the sacred water, gemstones with fine intaglio carvings and what is described as ‘a strange tin mask’ found in the Roma drain.

Perhaps the biggest find of all, though…apart from an incredible hoard of coins… is something intangible. One of the curse tablets is written in a language found nowhere else…and may be the only surviving example of the Brythonic tongue. For all the answers the archaeologists and historians have been able to find through studying the changing yet changeless history of the sacred spring, increasing our understanding of times and cultures long gone, we are still no closer to knowing the mind of the first men to see the spring as a gift from the Mother and we will never know what made them build the first shrine. It is easy to say that a hot spring is unusual and would be seen as sacred anyway… but that does not answer the question… who was that man..or woman… what happened to make them feel they had been touched by the goddess… and what was their story?

Sue Vincent is a Yorkshire-born writer and one of the Directors of The Silent Eye, a modern Mystery School. She writes alone and with Stuart France, exploring ancient myths, the mysterious landscape of Albion and the inner journey of the soul. Find out more at France and Vincent. She is owned by a small dog who also blogs. Follow her at scvincent.com and on Twitter @SCVincent. Find her books on Goodreads and follow her on Amazon worldwide to find out about new releases and offers. Email: findme@scvincent.com.
View all posts by Sue Vincent →
This entry was posted in Ancient sites, Art, England, Goddess, Mythology, Sacred sites, travel and tagged bath, healing waters, hot srping, offerings, Roman Baths, sacred spring. Bookmark the permalink.