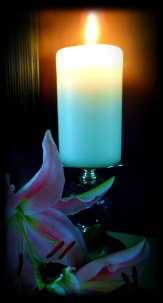 In remembrance of all those men, women and children

whose lives were taken from them

simply for being themselves.

The flame symbolises a resolve to stand

against prejudice, hatred and injustice today,

no matter what form it takes.

To learn from the past to create a brighter future

for our children and grandchildren.

On 27 January 1945, Auschwitz-Birkenau, the largest Nazi concentration and death camp, was liberated. Over a million people had died there, and appallingly, that would come to seem but a drop in the ocean of tragedy that would emerge after the war.

Few are now left who remember first hand…though their children and grandchildren carry their memories and often their scars.

And it did not end there…  our world has seen almost constant war ever since. Genocide has continued and millions more have fallen to hatred and violence.

Even on our streets, as we face a common foe at this time with the coronavirus, we still find time for prejudice and distrust… the very ingredients that fuel tragedy.

On this Holocaust Memorial Day, let us be open to learning from the past… and making a difference to the future.

“Be the light in the darkness.”

Sue Vincent is a Yorkshire-born writer and one of the Directors of The Silent Eye, a modern Mystery School. She writes alone and with Stuart France, exploring ancient myths, the mysterious landscape of Albion and the inner journey of the soul. Find out more at France and Vincent. She is owned by a small dog who also blogs. Follow her at scvincent.com and on Twitter @SCVincent. Find her books on Goodreads and follow her on Amazon worldwide to find out about new releases and offers. Email: findme@scvincent.com.
View all posts by Sue Vincent →
This entry was posted in Life and tagged "Be the light in the darkness.", #HolocaustMemorialDay, hatred, prejudice. Bookmark the permalink.

16 Responses to Be the Light… #LightTheDarkness