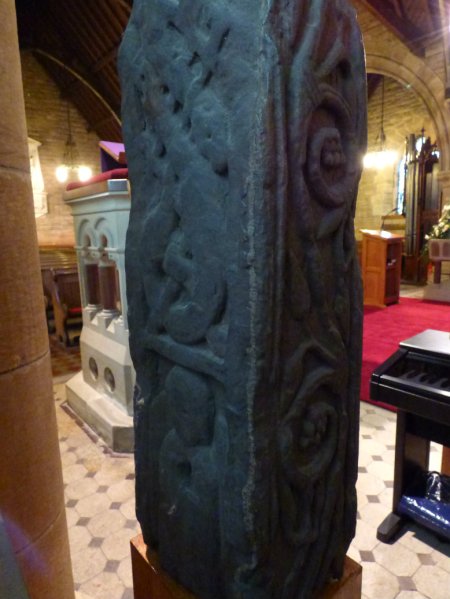 The panel bottom left of the stone shows the Aberlady Angel

We followed the Beadle in silence into the church, grateful for the history he was giving us about the place, as much for the information as for the fact that we had the chance to gather our wandering wits. I think we were both struck by the utter unlikelihood of the morning.

The church is beautiful… very simple and with much history tied up with the family of the Earls of Wemyss. The first thing we were shown was entirely unexpected… you don’t fall over sculptures by Antonio Canova every day … not in village churches anyway. There were other monuments, both incredible and discrete, including a simple plaque to Captain Hon. Walter Charteris, son of the 9th Earl, who was killed whilst serving with the Gordon Highlanders at Balaclava during the Charge of the Light Brigade in 1854.

The windows, set deeply in the walls, are small jewels catching the light. Over the altar in the east the stained glass is by Edward Frampton, copied from the Sandro Botticelli painting of the Virgin Adoring the Sleeping Christ, which is in the possession of the Wemyss family. Other windows tell the story of the Life of Jesus. I particularly liked the Ascension… the arms, body and halo, with the light of the Holy Spirit descending, seem to echo the Celtic Cross above the altar.

Sue Vincent is a Yorkshire-born writer and one of the Directors of The Silent Eye, a modern Mystery School. She writes alone and with Stuart France, exploring ancient myths, the mysterious landscape of Albion and the inner journey of the soul. Find out more at France and Vincent. She is owned by a small dog who also blogs. Follow her at scvincent.com and on Twitter @SCVincent. Find her books on Goodreads and follow her on Amazon worldwide to find out about new releases and offers. Email: findme@scvincent.com.
View all posts by Sue Vincent →
This entry was posted in adventure, Photography, scotland road trip, travel and tagged Aberlady, Canova, carved stone, High Cross, stained glass, Wemyss. Bookmark the permalink.