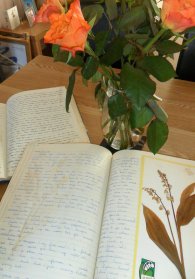 I’d had occasion to delve into the depths of old diaries. I had kept them on and off for years, but when I went to work in France in 1981 my mother bought me an A4 book and suggested I keep a record of the adventure.

The opening passage I had scribbled through the tears at the station after saying goodbye. It was short and factual, barely conveying the emotion of the moment. Over the next few weeks, it records the daily adventure in some detail and it is lovely to have the memories held there, the small things that would have been lost in the shadows cast by the bigger events.

Over time, however, living in a land that was not my own, when communication with home and family was by snail-mail and the friends I was making were new and spoke in a language I was still discovering, the diary became my best friend. I confided to its pristine sheets all the small heartaches and joys, the loneliness that was inevitably part of that time of adjustment, the hopes, fears and longings that youth carries through the peaks and troughs of emotion.

I cringe at much of what was written, the outpourings of a very young woman growing into herself, lacking in confidence, fragile yet optimistic. A mouse who hid inside herself from so much. Far too… well, I shall simply draw a veil over much of the diary in self-defence. We have all been young and, if we are honest, probably very silly at times. It is part of the journey.

It is a curious thing to look back at oneself like this from what was then the future. The life events that have passed between have shaped and moulded the raw material and seed-self into the woman I have become. Curious too to see how the choices made at each point in the journey have been responsible for the changes wrought over the intervening decades.

But some things, it seems, do not change. I came across the Wish List.

Reading through it from a perspective over thrice ‘her’ age, I am surprised at how little she was wishing for. All twenty-five points were reasonable and attainable and oddly, it is some of the simpler ones I have yet to achieve. But back then, they all seemed so far-fetched and ambitious that I never expected to attain any of them.

Now okay, it does highlight the need to be utterly precise in your wishes, a principle taught in the Mysteries and illustrated by experience. I did lose the five pounds, exactly where I wanted to… evidently, I should have specified that I wanted them to stay lost. I did manage to collect beautiful antique fans, though they were sold years ago to feed the children. And the only huge bouquet of flowers delivered to me by a florist until very recently was for a funeral… which wasn’t quite what I had in mind somehow.

I haven’t made it to either Carnac or Egypt. But then, I am not dead yet. I did, however, have the joy of throwing my doors open and welcoming friends to my table. I had my ‘je t’aime’ from someone who meant it at the time and have been blessed to love and be loved. I do have two wonderful sons; the dream was always to have one on either side of me towering over me. They took that to extremes as both are a foot taller than I and call me the hobbit… but I can live with that and look up at them with love and pride.

And I have, I think, been of some use. An odd ambition for a twenty-year-old, perhaps, but one I would still include were I to write the list again today, though for a less needy motive.

But on the whole, I feel I have done rather well. Sixteen out of twenty-five… so far.  And a couple of ‘almosts’ that came close enough to count. Still some left to aim for… which is surely better than having no dreams at all.

On the other hand, I have learned and experienced things I could never have imagined in the perceived blandness I saw as life then. There is a richness in the ageing process, a confidence and ease that comes in accepting what life offers, good or bad, and embracing it with a whole heart. Who knows how long a life will be? Why waste it chasing only the impossible when life is here and now and holds beauty and laughter and possibility?

Dream by all means… I still dream of seeing every corner of the globe, painting a perfect picture and holding a star in my hand. Dreams and imagination are the fuel of life. But don’t ignore the moment and all it has to offer. Who knows what you could be missing?

Sue Vincent is a Yorkshire-born writer and one of the Directors of The Silent Eye, a modern Mystery School. She writes alone and with Stuart France, exploring ancient myths, the mysterious landscape of Albion and the inner journey of the soul. Find out more at France and Vincent. She is owned by a small dog who also blogs. Follow her at scvincent.com and on Twitter @SCVincent. Find her books on Goodreads and follow her on Amazon worldwide to find out about new releases and offers. Email: findme@scvincent.com.
View all posts by Sue Vincent →
This entry was posted in Dreams and tagged ambitions, diary, journals, wish list, youth. Bookmark the permalink.