Alcock’s Arbour from the north down Trench Lane.

On the A46 Stratford Road, on the left, going from Stratford-on-Avon in Warwickshire, is a conical hill known as either the Devil’s Nutting Bag, the Devil’s Nightcap or Alcock’s Arbour. It is more apparent visually though if you approach it from the Stratford Road/Trench Lane direction from the north, when it will be right in front of you.

The Devil appellations come from the legend that he was out gathering nuts one 21st September, appropriately known as the Devil’s Nutting Day: a rhyme from 1709 goes, “The Devil as common people say, Doth go a nutting on Holy-rood day”. Holy –rood day being the Feast of the Exaltation of the Holy Cross (21st September). Anyway he unexpectedly met the Virgin Mary. Stories vary as to what happened next. Some say that he was so surprised that he dropped the bag of nuts. Another story says that she ordered him to drop the bag of nuts. Whatever happened, the bag of nuts became the hill. A Warwickshire saying was that anything dirty or dingy was said to be as, “the colour of the Devil’s nutting bag.”

The Alcock name comes from a robber called Alcock who kept his ill gotten gains locked in a chest in a cave inside the hill. There are documents from 1480 which mention a John Alcock. A partly filled in hole at the base of the hill marks where this cave was. The treasure is still said to be there, locked in a chest, with three locks and with a cockerel on top guarding. Someone did manage to open three of the locks once, but go torn to pieces by the cockerel when he tried to open the third. It is said that if the cockerel is given a bone from whoever put him there, then he will relinquish the treasure. Some Roman coins were un-earthered there. Which might be the origin of the treasure story. 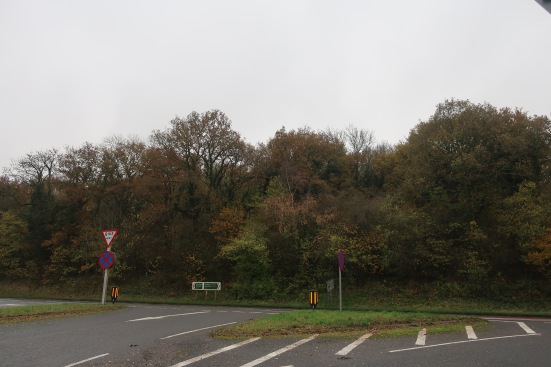 Alcock’s Arbour, immediately in front of it.

Sue Vincent is a Yorkshire-born writer and one of the Directors of The Silent Eye, a modern Mystery School. She writes alone and with Stuart France, exploring ancient myths, the mysterious landscape of Albion and the inner journey of the soul. Find out more at France and Vincent. She is owned by a small dog who also blogs. Follow her at scvincent.com and on Twitter @SCVincent. Find her books on Goodreads and follow her on Amazon worldwide to find out about new releases and offers. Email: findme@scvincent.com.
View all posts by Sue Vincent →
This entry was posted in Living Lore and tagged Devil, folklore, mysths and legends, warwickshire. Bookmark the permalink.