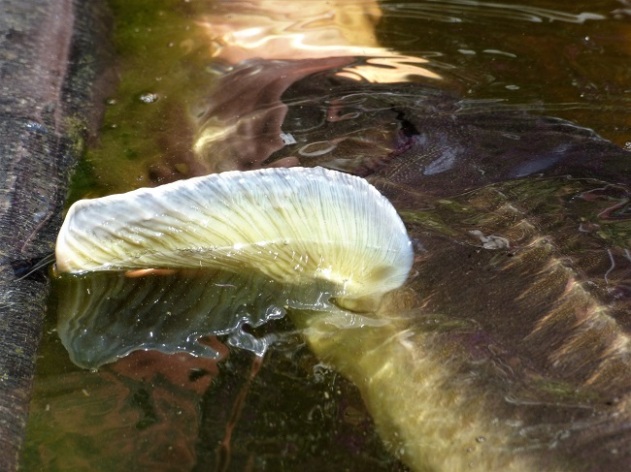 The phone rang. It was getting late and only one person is likely to call me at that time, so it was no surprise to hear my son’s voice. What was surprising, though, was the tone of the voice that I heard down the line.

“It’s the big sturgeon…” for a moment, I thought it was panic I was hearing. Especially after the tragedy we had with the pond a little while ago, when so many of his fish had been lost to the heat. But he sounded more like a small boy on Christmas morning.  His next words explained that, “…it’s just been eating out of my hand! Er… he doesn’t have teeth, does he?” I reassured him… sturgeons are bottom-feeders; their mouths, situated underneath their heads, extend like the tubes of a vacuum cleaner. 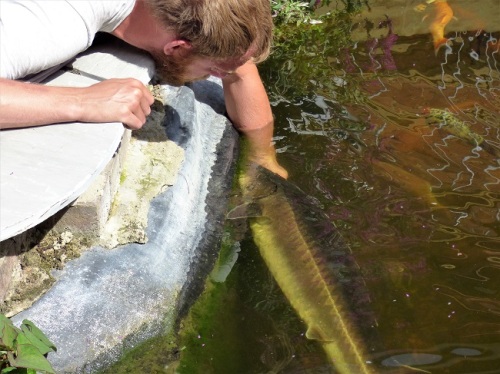 I could quite understand the excitement, though. The big sturgeon is Big with a capital ‘B’.  The death of Jay, the largest of the three sturgeon, had hit hard, but this one seemed to be growing into his place, both in terms of size and character. My son named him Envy… a reminder of his own teenage ‘tag’ based upon his initials, N. V.

In fact, since he lost so many of the fish, he has named almost all of them. The names are not randomly chosen… he waits until he knows them well enough as individuals to give them a name that reflects their looks or character. We have, amongst many others, the graceful Willow, armoured Lancelot, orange and black Garfield… even Happy Fish has been renamed Fido, because his antics and movement remind us of a puppy. 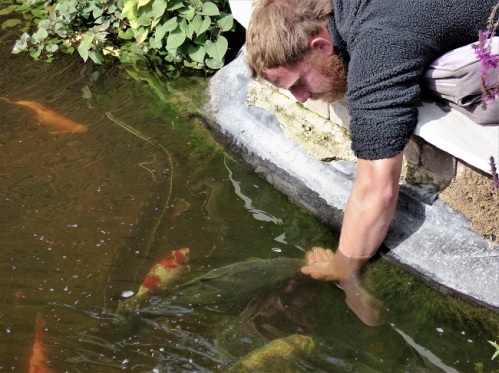 And the big sturgeon is not the only one happy to feed from Nick’s hand, even though this has only been an option for the past two days. The pond, until work started to remodel the old, decked garden nearly three months ago, was completely surrounded by the handrails Nick needed to get around. 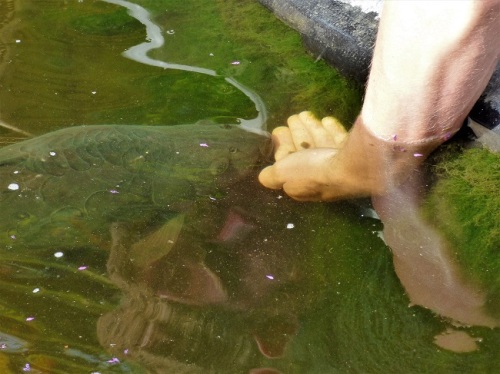 A bit of creative thinking, though, along with the progress Nick has made over recent years, has allowed us to open up the access, which makes my life easier for cleaning the pond and lets Nick get up close to his fish.

The fish, in turn, have grown used to us watching them every day as we have spent the summer in the garden, watching every stage of the work to make sure it not only looks good but works for Nick’s needs.

They have adapted to all the strange noises from tools, machinery and workmen and show as much interest in us as we do in them. All it took was for Nick to spent a chilly hour with his hand in the pond one evening for the fish to come close enough to feed.

Some are still wary, but all of them are interested and swim within inches of his hand as he lays there, so still that he attracts observers…and passengers.

But the big sturgeon is by far the most comfortable, taking to the new relationship like the proverbial duck to water. By the second day, he was not content with hoovering up the food from Nicks’ hand… 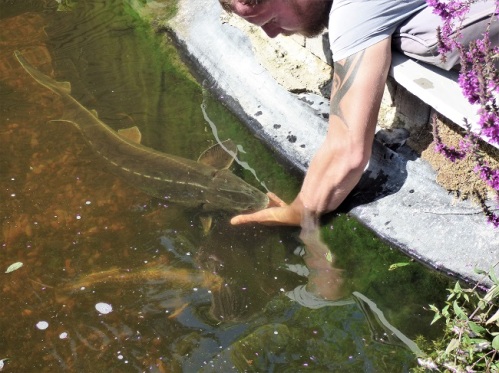 …he was coming up to where Nick was sitting and asking to be fed, making loud, sucking noises, raising his head right out of the water…

…and pretty much crawling up Nick’s arm, with his extendable mouth. 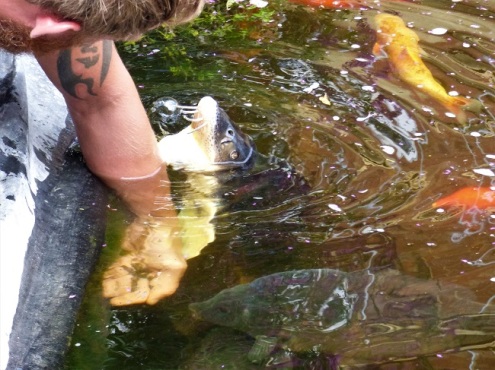 It is a delight to see Nick and his fish together, and watch as a wordless communication grows, eye to eye, between two worlds… breaching the species barrier with a love and trust that seems to work both ways… and seems to feed something in both species.

Sue Vincent is a Yorkshire-born writer and one of the Directors of The Silent Eye, a modern Mystery School. She writes alone and with Stuart France, exploring ancient myths, the mysterious landscape of Albion and the inner journey of the soul. Find out more at France and Vincent. She is owned by a small dog who also blogs. Follow her at scvincent.com and on Twitter @SCVincent. Find her books on Goodreads and follow her on Amazon worldwide to find out about new releases and offers. Email: findme@scvincent.com.
View all posts by Sue Vincent →
This entry was posted in Photography and tagged communication, fish, Garden, nature, pond, sturgeon, trust. Bookmark the permalink.

70 Responses to Up close…