A new book by one of the writephoto regulars…

A few months ago, when my wife and I started looking for places to visit on a meagre budget during our Diwali vacation (Actually, make that her Diwali vacation, since I am just a struggling, unemployed writer), we had little idea as to how the plan would get a life of its own, and like the mythical Hydra, grow to humongous proportions, resulting in an epic one week trip to Turkey by six friends (actually, that is strictly not true because  except for my wife and I, everyone else was a stranger to at least one other person in the group when we started off) that was filled with non-stop action, boat-loads of drama, and not a little heart-break.

The first thing I decided upon coming back was to write a book of short stories inspired by our trip so that we could store those crazy memories forever. The question that then came up was: What kind of book should I write?

Of course I had the option of writing a regular travelogue. It’s not as if we did not go to enough exotic places, or did not have enough exciting adventures. But why on earth would you be interested in what a group of strangers did in a strange land? I know I wouldn’t.

And so it was that I decided to write what I call an Un-travelogue.

You can look at it as a series of real photographs, bound together by a fictional story, or as a series of fictional incidents, bound together by real photographs. But whichever way you look at it, my primary, in fact sole, purpose while writing this book was to spin stories so unique in such an entertaining way that you could not care less whether they were true or not.

And so, when I started writing Turkish Delight, I took the truth, and picking it up carefully, so as not to break it, set it aside gently, so that it would not come in the way of a good story.

Truth, they say, is stranger than fiction. But when I hear this old adage, I just jut my chin out, adjust my non-existent black tie, and say, “Challenge accepted.” 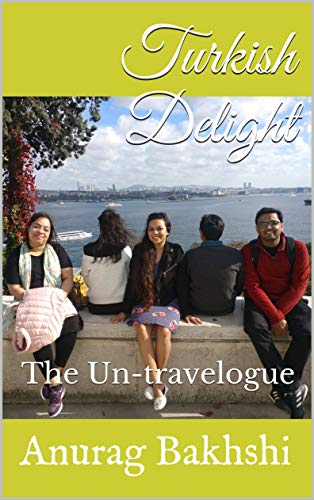 In November 2018, a motley crew of friends from Mumbai and London, decided to travel to Istanbul and Cappadocia together for a vacation. What happened next…is something you would obviously not be interested in. After all, who cares about what some strangers did for a week in a strange land? Hence, I decided to write what I call a ‘Un-travelogue’, in which, like in many travelogues, each day has a story dedicated to it. However, in this case, though the stories are inspired by real incidents during the trip, the content of the stories is entirely a figment of my imagination. Or is it?

These stories will tease you, excite you, and hopefully, involve you, but above all, they will entertain you, only, and only if, you let the child in you come to the surface, and let your imagination run wild!

When Anurag Bakhshi turned 40 a little under two years ago, he underwent a Mid-Life Awakening, totally unaided by any intoxicating or hallucinogenic substance, he swears. He decided to quit his 17-year old long corporate career (most of it in the Media & Entertainment industry), and decided to become a full-time writer. Since then, he has been writing a story a day on his blog and travelling across the world (well, mostly Europe, but that doesn’t sound as grandiose) collecting stories (as he says), or blowing up all his savings (as everyone else says). Whenever he is back in India, he tries to hustle up some freelance writing work, so that he can earn enough to plan their next trip, of course.

Sue Vincent is a Yorkshire-born writer and one of the Directors of The Silent Eye, a modern Mystery School. She writes alone and with Stuart France, exploring ancient myths, the mysterious landscape of Albion and the inner journey of the soul. Find out more at France and Vincent. She is owned by a small dog who also blogs. Follow her at scvincent.com and on Twitter @SCVincent. Find her books on Goodreads and follow her on Amazon worldwide to find out about new releases and offers. Email: findme@scvincent.com.
View all posts by Sue Vincent →
This entry was posted in Guest post and tagged Amazon, Amazon Kindle, Diwali, fiction, friends, humour, new book, turkey, vacation. Bookmark the permalink.