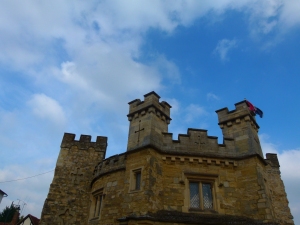 …”When it comes to the end of life you have to have something to call your own,” Bill slipped his arm through mine.

The soft twill of his well pressed jacket warmed my bare flesh.

“Something you’ve come up with yourself,” Bill’s friend did likewise and we started to pace the white tiled floor of my room in step.

“Something you’d like to keep but would like even more to give to the world, while at the same time denying that it has anything to do with you,” said Bill.

“When Death settles upon your shoulders, folds her wings around your body and rests her fore paws on the crown of your head,” put in Bill’s friend.

“It’s as well to have something to say for yourself,” continued Bill.

“A grand idea to engage her thoughts,” said Bill’s friend.

“A sublime notion to temper her plans for you,” said Bill.

“A beautiful lie to charm her soul,” said Bill’s friend.

“A ridiculous gesture…” I ventured tentatively, “to tickle her fancy?”

Bill’s friend smiled, “Death and Soul are in league with each other.”

“They even sound similar when they speak,” they said together and then they started laughing.

“They’re both after memories, that’s all,” said Bill, “Death wants to satisfy Life with them,”
“…Soul, Love…” finished Bill’s friend,” it’s as simple and… ”
“…as straightforward as that,” finished Bill.

“There’s no mystery to it,” said Bill’s friend.

“It’s just a passion they hold for each other,” said Bill…

We started moving towards the door…

Sue Vincent is a Yorkshire-born writer and one of the Directors of The Silent Eye, a modern Mystery School. She writes alone and with Stuart France, exploring ancient myths, the mysterious landscape of Albion and the inner journey of the soul. Find out more at France and Vincent. She is owned by a small dog who also blogs. Follow her at scvincent.com and on Twitter @SCVincent. Find her books on Goodreads and follow her on Amazon worldwide to find out about new releases and offers. Email: findme@scvincent.com.
View all posts by Sue Vincent →
This entry was posted in Books, Spirituality, Stuart France and tagged esoteric, magic, mystery, psychology, story. Bookmark the permalink.