It is always a delight to visit the lovely Sue and I cannot thank her enough for inviting me back to her blog to tell you all about the latest book in the PorterGirl series, Sinister Dexter.

After avoiding the murderous intentions of The Vicious Circle in First Lady Of The Keys and risking life and limb to find a priceless missing painting in The Vanishing Lord, our heroine Deputy Head Porter finds herself once again at the centre of strange and macabre goings-on in the notorious Old College.

One of the oldest and most illustrious educational establishments in the country, Old College boats a bloody and turbulent 400 year old history and the arrival of its first female Deputy Head Porter has done little to calm matters. if anything, it’s made them worse. We join Deputy Head Porter at the beginning of a new academic year where the induction of a new Bursar – the enigmatic Professor Dexter Sinistrov – causes ructions. With his first act of office being to cut the tea and biscuit budget for the Porters’ Lodge, he makes himself instantly unpopular with the bowler-hatted staff within. But it is more his penchant for poisoning people that really concerns Deputy Head Porter.

Meanwhile, Head Porter appears to be leading a secret double life and The Dean is convinced that Russian spies are after his job. When two dead bodies turn up at the bottom of the College gardens, Deputy Head Porter is determined that there will not be another College cover-up, even if that does mean begrudgingly working alongside unwelcome outsiders DCI Thompson and DS Kirby. Add to that a wayward College drinking society and an ageing Lothario of a professor and Deputy Head Porter really does have her hands full.

Sometimes the opposite of right isn’t wrong. It’s left.

Tragedy strikes once more at Old College… The Porters’ Lodge is down to its last tea bag and no one has seen a biscuit for over a week. Almost as troubling are the two dead bodies at the bottom of the College gardens and a woman has gone missing. The Dean is convinced that occult machinations are to blame, Deputy Head Porter suspects something closer to home.

The formidable DCI Thompson refuses to be sidelined and a rather unpleasant Professor gets his comeuppance.

As the body count rises, Head Porter tries to live a secret double life and The Dean believes his job is under threat from the Russian Secret Service.

Deputy Head Porter finds herself with her hands full keeping Old College running smoothly as well as defending herself against the sinister intentions of the new Bursar.

Spies, poisoning, murder – and none of this would be any problem at all, if only someone would get the biscuits out and put the kettle on…

This is the third instalment of the world-renowned PorterGirl series set in the ancient and esoteric Old College. Author Lucy Brazier opens the lid on a world which has sinister overtones in this cozy, BritLit mystery.

Lucy Brazier is in her 30’s and lives in the university city of Cambridge, England. She started writing from the age of ten when her primary school teachers were at a bit of a loss as to how to contain her effervescent personality. They tasked her with writing stories for the younger children in a bid to keep it from disrupting her peers. Lucy developed her skills throughout her teenage years, when she was inspired to read the words of Homer, Livy and Virgil. These formative years also saw her develop her other great passion of music, where she threw herself into several years of misbehaving and playing bass guitar in unsuitable rock bands. She winded her literary horizons through the works of Terry Pratchett, Oscar Wilde and Flann O’Brien – the latter of which remains to this day her favourite writer. Lucy developed a penchant for the unusual and the absurd, something which was exacerbated by her time serving in the Police where the many varied experiences and character she met had a profound effect on her outlook on life. After 7 years on the front line and driven by fascination with Inspector Morse, on a whim Lucy applied for the job of Deputy Head Porter at one of the foremost colleges of Cambridge University. To her great surprise, and that of many others at the time, she landed a role as the first female to don the iconic bowler hat in the colleges six hundred year history. Having left formal education at the tender age of sixteen with little to show for it, being thrown in among the academic elite was something of an eye opener. Documenting the quirks and fables of College life on social media, Lucy was soon persuaded to start a blog – Secret Diary Of PorterGirl. Acutely aware of the dim view taken by College officials of any slight upon their reputation, she wrote anonymously and in such a way as to disguise the true identity of the now notorious Old College. However, being quite possibly the worst Deputy Head Porter of all time made her decide to hang up her bowler hat and pursue her dream of becoming a writer. Lucy considers this is the best decision she has ever made. In December 2015 Lucy signed with Kensington Gore Publishing and Secret Diary Of PorterGirl was rewritten and republished in the summer of 2016 as PorterGirl The First Lady Of The Keys. KGHH Publishing see this book and others to follow a great glimpse into the unique world of college life. A world that never seems to change, more evolve into a world of its own.

Finnegans Wake – a guide by an idiot

Other Books by Lucy Brazier
Click the images, links or titles to go to Amazon 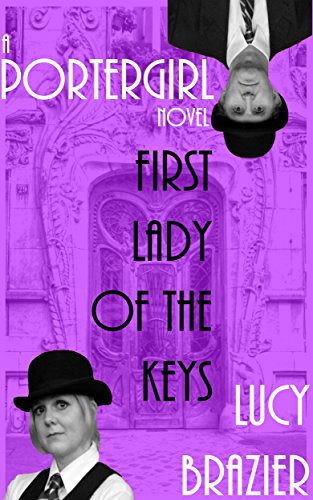 PorterGirl: First Lady of the Keys

‘Porters are not the carriers of bags, they are the keepers of keys!’

As one of the most ancient and esteemed establishments of the academic elite, Old College is in for something of a shock when it appoints its very first female Deputy Head Porter.

She struggles to get to grips with this eccentric world, far removed from everyday life. PorterGirl, the proverbial square peg in the round hole, begins to wonder quite what she is doing here.

PorterGirl – First Lady Of The Keys is a touching, and at times laugh-out-loud funny, glimpse into a world that is usually reserved for the upper echelons of society.

Whether she is chasing after naked students, drinking copious amounts of tea or getting embroiled in quaint, polite murders, Deputy Head Porter is never far from adventure.

Extract of an Amazon review by author N.A.Granger:
“I thought of Bridget Jones’ Diary as I began to read this book. The descriptions of antics of the Old College and its Fellows, its time-honored and sometimes senseless traditions, and the adventures of Porter Girl’s daily life – chasing after naked students, watching a ceremony on her knees behind a curtain, finding secret rooms and passages, mindlessly sorting keys, and the drinking of gallons of tea – at times made me laugh out loud. Balancing the humor are the soaring, beautiful and detailed descriptions by the author of Old College and its grounds, with each passing season. Clearly based on a real place, these made me want to visit… with Porter Girl as my guide.
I highly recommend Porter Girl: The Keeper of the Keys. One of the Best books I’ve read this year!” 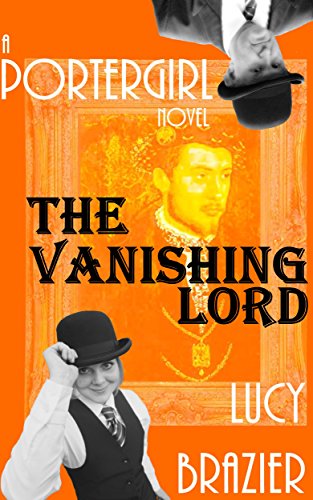 There’s nothing quite so annoying as having the police arrive when you are trying to cover up a crime that may or may not have happened.

Lord Bernard has died unexpectedly. Is Deputy Head Porter being framed? Head Porter just wants to be kept out of the picture.

In this fast-paced whimsical British romp, a priceless work of art – the portrait of Old College founding father Lord Arthur Layton – has gone missing and with the death of Lord Bernard, the Master of arch rivals Hawkins College, there is nothing for it but for our heroine to don her trusty bowler hat and embark upon another eccentric investigation.

In this sequel to the debut PorterGirl novel, First Lady of The Keys, Old College’s first and only female Porter must find the portrait or it will be her that is flat on the canvas and framed like a kipper.

Extract of an Amazon review by EDC Writing:
“In ‘The Vanishing Lord’ the second of the PorterGirl novels Deputy Head Porter has found her feet – even when disguised as a flighty girl in killer heels! So many scenes Lucy has brought to life in her inimitable way, framed and hung around a missing painting … with a touch of medieval spice … don’t ask just read! Deputy Head Porter, bowler hat and waistcoat her usual attire, the ‘First Lady of the Keys’ at Old College, a world of doors and gates, dark passages , tea and whisky, secrets and mischievous ways … a world in which everyone knows and known by their place. Such characters, from The Master to the Bedders … all slightly to the downright quirky! None more so than The Dean, a triumph of imagination, he steals every scene he’s in. And then there are the outsiders – the police, so inconveniently tenacious, and an excitable young man with thighs … no spoilers … I’ll let Lucy tell you … this novel, as the first one, such a joy to read.”

Have a book to launch? Why not be my guest?

Sue Vincent is a Yorkshire-born writer and one of the Directors of The Silent Eye, a modern Mystery School. She writes alone and with Stuart France, exploring ancient myths, the mysterious landscape of Albion and the inner journey of the soul. Find out more at France and Vincent. She is owned by a small dog who also blogs. Follow her at scvincent.com and on Twitter @SCVincent. Find her books on Goodreads and follow her on Amazon worldwide to find out about new releases and offers. Email: findme@scvincent.com.
View all posts by Sue Vincent →
This entry was posted in Books, Guest post and tagged Book launch, Cambridge, Head Porter, humour, portergirl. Bookmark the permalink.