The flavour of revenge

No, not this one…

You’ll have heard of the spider that got me in spring
How it went for my foot in the car
How it bit me five times
With no reason nor rhyme
Which was going a little too far.

You’ll remember perhaps that it made me quite ill
And my leg went all swollen and round?
Elephantine proportions
And major distortions
..I couldn’t set foot to the ground!

“Aha,” said the doctor, “Emergency room…”
And he sent me to hospital quick
But the antibiotic
They gave me? Chaotic…
Just left me allergically sick.

So emergency room, once again, and for real;
In a state, I was, all faint and choking…
I’d gone down with a clout,
But they sorted me out
…But the spider’s small gun was still smoking.

For months the bites itched, though they healed up and scarred
And although I’m now wary of spiders
I still feel no fear
And they live with me here…
Though the dog can’t abide ’em beside her.

But I had my revenge, inadvertently though…
And they say it’s a cup one should savour…
Though I drank it with glee…
It just was not for me…
Though revenge is now pineapple flavour.

For at breakfast, you see, my host passed me a glass
Full of pineapple juice, freshly poured
But a spider had hidden
Within it unbidden
And being unseen, was ignored…

There are teachings that state that revenge is a sin
And yet others that seek eye for eye…
There are some who just pray
And yet others who say
You should kiss that emotion goodbye.

I was taught that such negative feelings should be
Into oneself absorbed… taken in…
But not literally…
That’s a new one on me…
And yet now I’ve a spider within.

So… the moral to this, for it has to be so
And each tale has to wear its own crown…
When you empty the sink,
Take a moment to think…
And put glasses away upside down. 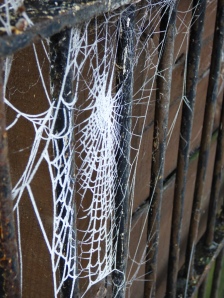 Sue Vincent is a Yorkshire-born writer and one of the Directors of The Silent Eye, a modern Mystery School. She writes alone and with Stuart France, exploring ancient myths, the mysterious landscape of Albion and the inner journey of the soul. Find out more at France and Vincent. She is owned by a small dog who also blogs. Follow her at scvincent.com and on Twitter @SCVincent. Find her books on Goodreads and follow her on Amazon worldwide to find out about new releases and offers. Email: findme@scvincent.com.
View all posts by Sue Vincent →
This entry was posted in Humour, Photography, Poetry and tagged allergy, juice, revenge, rhyme, spider bite, Verse. Bookmark the permalink.

47 Responses to The flavour of revenge