If the only way I can get out and play at the moment is to revisit old haunts, then so be it, Four years ago, I stumbled across a little gem of a church… very unexpectedly…

For once, I had managed to leave in good time for my trip north. Had I been feeling well, I would have stopped at a cathedral I’ve been meaning to visit, but as I was still feeling decidedly weird, I did not stop until I was within easy each of my destination… and that gave me time to explore. I have been meaning to have a wander around Dovedale for a while. I had made a few brief forays, but not when I had time to spare, so I left the beaten track behind and took to the lanes. 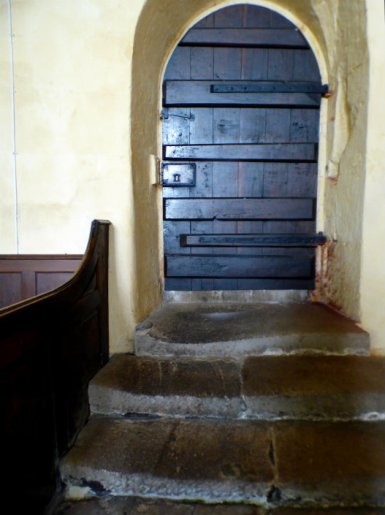 Passing an old manor, I glimpsed a church tower in the distance and headed towards it, parking near a vast bank of starry, white ransoms covered in butterflies.  Old yew trees guarded the entrance to the little church in Blore Ray, whose nominal told me was dedicated to St Bartholomew. Even without the acquired knowledge of ecclesiastical architecture, you could tell the place was old, right from the start, just by the wear to the stone steps leading down into the nave.

Gouges in the walls beside the door show where the great bar would have been dropped behind it to secure it against intruders, worn by centuries of use. The church was built around 1100, on the site of an older building. There are traces of the original Norman work in the nave,  but the tower and chancel are much newer additions, dating back to the 14th century.

A broken holy water stoup sits in the porch, a reminder of a time before the Reformation in the 16th century, when the Church of England parted company from Rome. There are other reminders of that time and of the later damage done by Cromwell’s Puritan regime in the concealed squint and entrance to the destroyed rood loft. The squint, or hagioscope, is an oblique tunnel through walls that block the view of the high altar. They were installed so that those in the side chapels would be able to see the elevation of the Host during Mas, as which time they were required to make the sign of the Cross. Sometimes such squints were installed in external walls, to allow lepers and beggars to witness the Mass without coming into contact with either priest or congregation.

The rood loft was a gallery above the rood screen, a partition between nave and chancel. Many carved screens survived the depredations of both Henry VIII’s Reformation and Cromwell’s edicts, but far too many were lost. Above the screen there was often a gallery leading to the loft where a sculptured representation of the Crucifixion would be displayed.

At Blore, the screen is Tudor, as are the choir stalls and the surprisingly modern-looking font that stands near the Early English tower arch. The box pews are Jacobean and therefore 17th century… and, all in all, this deceptively simple little church manages to encapsulate nearly a thousand years of English architecture and local history.That is one of the things that make these country churches so wonderful to visit.

The churches have been ‘off the menu’ for a while, until very recently when they have been tugging at our attention once more. We still follow whatever trail is set before us and, although we do not yet know why we are back to looking at churches again, waiting to discover the reason is exciting in itself. Everything has been a little quiet for the past couple of years while we concentrated on writing the annual workshops, but as the next one is Steve’s, we can get back on the trail… and it has been calling for a while. 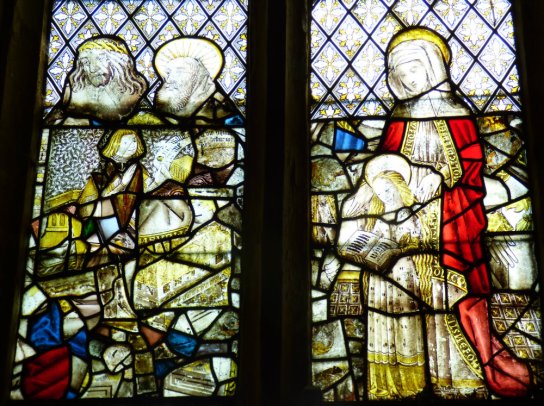 It is like a mosaic, with random pieces of a puzzle dropping into our laps. The fun is in sorting them out, recognising the forms within the pieces and making them into something new… just like the fragments of painted glass in one of the windows. There are some recognisable figures, like the head of Christ and St Anne teaching the Virgin to read which dates back to 1510, but many fragments are unidentifiable, unless you have specialist knowledge of the coats of arms or iconography. The resulting mosaic may make no sense at first, but together the pieces do tell a story. offering glimpses of many stories that all speak to the heart and imagination. 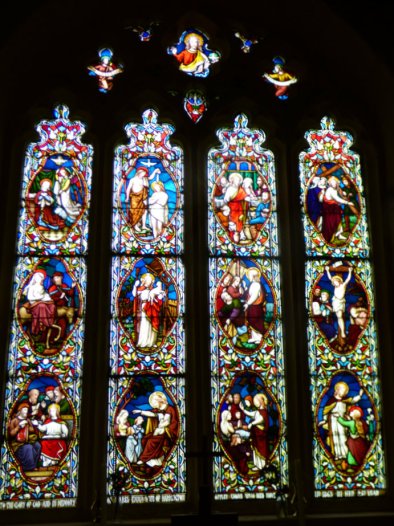 There is only one other stained glass window, above the high altar, showing scenes from the life of Jesus. The little church is s place of tranquil simplicity, and yet, there is more to it than at first meets the eye. But the little chapel to the north of the altar deserves a telling of its own…

Sue Vincent is a Yorkshire-born writer and one of the Directors of The Silent Eye, a modern Mystery School. She writes alone and with Stuart France, exploring ancient myths, the mysterious landscape of Albion and the inner journey of the soul. Find out more at France and Vincent. She is owned by a small dog who also blogs. Follow her at scvincent.com and on Twitter @SCVincent. Find her books on Goodreads and follow her on Amazon worldwide to find out about new releases and offers. Email: findme@scvincent.com.
View all posts by Sue Vincent →
This entry was posted in adventure, albion, Ancient sites, Churches, England, History, Photography, Sacred sites, Spirituality, Stuart France and Sue Vincent, The Silent Eye, travel and tagged Bassett tomb, Blore Bay, Dovedale, Norman architecture, Staffordshire, stained glass. Bookmark the permalink.

34 Responses to A country church