North-easterly: In Face of History 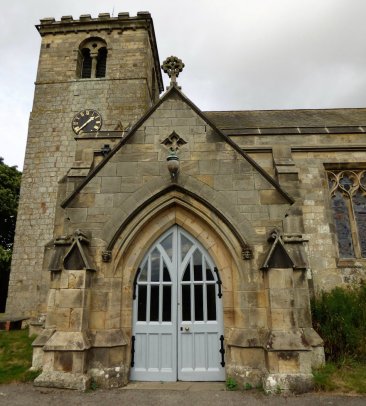 We could hardly spend so much time in the churchyard at Rudston without visiting the church. While the Monolith alone was worth the long detour from our route home,  we were quite interested to see what kind of place had been built a mere twelve feet from the tallest standing stone in the United Kingdom.

All Saints’, Rudston, looked like a good church. It has an air of being older than it appears and, given that it was built on an ancient sacred site, we would have expected it to be so;  few opportunities were lost when it came to appropriating the ancient places of reverence and claiming them for the Christian faith.

Unless some obscure reference to such a building remains, or the archaeologists turn up something remarkable, there is no way of knowing if there was an earlier chapel on the site, but the present church was built around 1100 by William Peverel, who held the manorial lands. Peverel’s father, also called William, had built the castle at Castleton in Derbyshire, a place we know well, and was reputed to be an illegitimate son of William the Conqueror. Little of the original church now remains, apart from the base of the tower and the font. 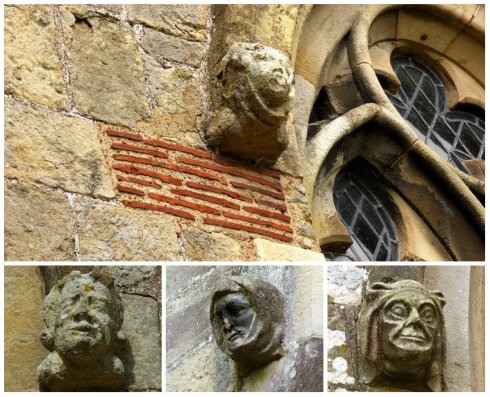 Both inside and out there are details worthy of note, including a plethora of heads… some relatively modern, others showing their medieval origins. There are also patched repairs made with red tiles and a datum mark carved discretely on a wall near the porch.

The font is the first thing that you see when you open the door. Nine hundred years old and with its carving still fresh and sharp, it has seen the baptism of all who have embraced the Church and its faith for centuries and miles around. It is carved with a lattice of saltire crosses and circles, for redemption and eternity, and around the rim is a decoration of narrow arches. While the cover is modern, you can still see the medieval fittings for an earlier cover, when the font would be kept locked to prevent witches stealing the holy water for use in their spells.

Behind the font is a memorial plaque commemorating the life of author Winifred Holtby, best know for her novel, South Riding, and for her friendship with Vera Brittain, who wrote Testament of Youth, and whose Testament of Friendship tells much of the two women’s lives during and after the First World War. Holtby was born just yards from the church and is now buried in the churchyard at Rudston.

Sue Vincent is a Yorkshire-born writer and one of the Directors of The Silent Eye, a modern Mystery School. She writes alone and with Stuart France, exploring ancient myths, the mysterious landscape of Albion and the inner journey of the soul. Find out more at France and Vincent. She is owned by a small dog who also blogs. Follow her at scvincent.com and on Twitter @SCVincent. Find her books on Goodreads and follow her on Amazon worldwide to find out about new releases and offers. Email: findme@scvincent.com.
View all posts by Sue Vincent →
This entry was posted in adventure, albion, Ancient sites, Churches, clues, England, History, Landscape, Mythology, Photography, Stuart France and Sue Vincent and tagged foliate man, green man, organ, piscina, Roman mosiac, Rudston All Saints, stained glass. Bookmark the permalink.

7 Responses to North-easterly: In Face of History