Everyone has heard of Robinson Crusoe. But how many know the real-life inspiration behind the character?

As Alex Turner explains on Quora, this would be Alexander Selkirk: 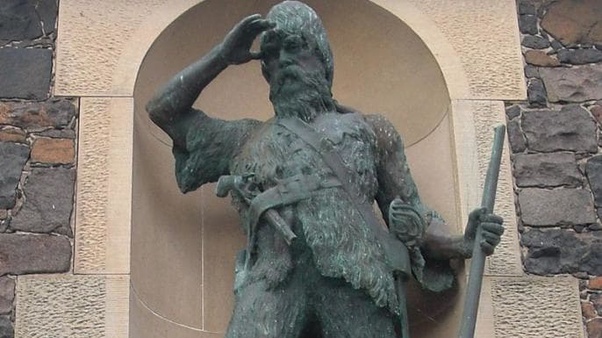 Selkirk was a Scottish sailor, born in 1676. He was a rather hotheaded man, who tended to look for exciting voyages whenever he could. In the early 1700s, he served in the War of the Spanish Succession, and after gaining valuable experience at sea, in 1704, he joined a British expedition to the South Pacific, just about as far away from Scotland as you can get.

On this voyage in 1704, Selkirk and his crewmates had made it as far as the totally uninhabited Juan Fernandez Islands, an archipelago more than 400 miles off the coast of Chile, when they discovered they needed supplies and fresh water. However, when their ship docked at Juan Fernandez Island, Selkirk realized that the ship was in bad shape and needed repairs.

Sue Vincent is a Yorkshire-born writer and one of the Directors of The Silent Eye, a modern Mystery School. She writes alone and with Stuart France, exploring ancient myths, the mysterious landscape of Albion and the inner journey of the soul. Find out more at France and Vincent. She is owned by a small dog who also blogs. Follow her at scvincent.com and on Twitter @SCVincent. Find her books on Goodreads and follow her on Amazon worldwide to find out about new releases and offers. Email: findme@scvincent.com.
View all posts by Sue Vincent →
This entry was posted in reblog and tagged Alex Turner, Alexander Selkirk. Bookmark the permalink.