Some years ago now, I got a fleeting glimpse of a book begun and put aside… a book that felt as if it needed to be written and set free to fly. When I saw that my friend, Alienora Browning, had finally released the book, I was so very glad. It is a story that has long waited to be told…

Back in 1984, when I, a mere stripling of twenty-six, was in my third year as an English teacher, my nightly marking routine was suddenly interrupted by three and a half sentences popping into my mind:

The words arrived from nowhere – and, despite the fourth-form exercise books piled all around me, I took pen and paper and wrote them down.

It was like being in an alternative universe, or a daze: the paragraphs just poured out, with me struggling to keep pace with them, the vision bright as a cinema screen, the sound of the West Wales accent bell-clear. It almost felt as if the words were writing themselves.

As the weeks passed, pages and chapters flowed, the sound of the typewriter a constant in those precious moments between each day’s teaching and the inevitable marking.

The setting – the area of West Wales between Aberystwyth and Machynlleth where I had lived for two and a half years – came back as vividly as if my leave-taking had been three minutes, rather than three years, previously, and the characters forced themselves down through the creative birth canal as insistently as over-their-due-date sextuplets!

On a whim, I sent the first three chapters off to a South West Arts’ Writers in Progress award – and won first prize.

All seemed to be going swimmingly.

But, under the bright blue surface of my writing ocean, the sharks were gathering. I had become involved in what turned out to be a long-lasting and very destructive relationship – and, days after finished ‘Heneghan’ (as the book was called back then), was viciously assaulted by an unknown man.

The net result of these two things was that I stopped writing, other than my journal, for twenty-five years – and the West Wales book, which had started so promisingly, languished in a drawer for decades, gathering dust and grime, its once-pristine typed pages yellowing with age.

Now retired, divorced, with six published books to my name and living in a different place, I recently felt it was finally safe to return to that long-abandoned manuscript and see if it was any good!

Chunks of the original manuscript were missing. The online file had become tangled-up and confusing to read. I almost deleted the lot – and came close to burning the paper copy.

But something stopped me. Call it stubbornness, if you will – or the memory of that innocent and trusting younger self, her passion ignited by a brightness of words and an abusive man. I could not quite let the inspiration she had experienced go; was not, even at the age of sixty-two, quite world-weary and cynical enough to dismiss her youthful enthusiasm and verbal experimentation as bonfire material.

So, gritting my teeth, I started to re-read the book I had written so many years before – and, for all that it needed work, there was something there which the trained teacher in me recognized as quality; something the older Ali could work with and flesh out.

It has been hard work, painful too – the process, inevitably, triggering all manner of memories – but there has been a strong cathartic element to the rewrite as well: a coming to terms with those turbulent years; a reminder of the deep love I have for that part of Wales, and an absolute affirmation that this book does not, as I feared, represent failure, trauma and poor life choices. That the bedrock beneath its various stages, its transitions and periods of growth – even its decades-long hibernation – had the strength and brightness of diamond.

Tears have been shed – many of them. Moments of doubt and panic and technological challenge have been faced. Finally, just under a week ago – on my sixty-third birthday – the book, now called ‘Under Cader Idris’, came out as an e-book on Amazon, to be joined by its paperback twin a day later!

I have not yet held my ‘baby’ – despite being gravid with the blighter for the better part of four decades – but a friend, who received her copy a couple of days ago, sent me two photos so I could coo over the newly-born ‘infant’!

Set under the craggy jaw and watchful eye of Cader Idris, the book deals with the inhabitants of a small village. Some are English; most are Welsh – and their daily lives, friendships, quarrels, heartbreaks, passions and pleasures exist within the physical boundary of mountain and sea and its emotional counterpart, their shared love of landscape. 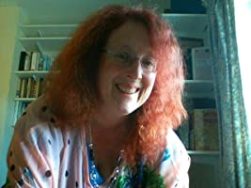 Brought up in Oxford, Alienora Browning studied at Aberystwyth University – and, having gained an English degree, taught English at a secondary school in the South West. Divorced, with one offspring, she is now retired and lives in Glastonbury.

Find all of Alienora’s books on her Amazon Author Page

Riding at the Gates of Sixty: “As I started reading this novel concern took over me, could a writer capture another writers voice without losing her own? The answer was yes! Not only does Taylor manage this difficult task with little effort, she positively shines as she does it. The lyrical beauty of her words often dance across the page and the reader is swept up in the journey she takes us on…” K. L. Caley

The Lyre of Logres: “…lyrical pieces – some haunting, some beautiful – and all of them thought-provoking…” Emma C

Long-Leggety Beasties: “Comedy Gold!Ok. We’ll start with the Star Rating 5 ! Is that all I’m allowed to give maybe I’ll review it again so that I’ve technically given it 10!!Now to review it. Oh good God It’s hilarious! Bear in mind that I am reading it out loud to my wife who’s eyesight prevents reading at speed. There are times when I have had difficulty grabbing breath to speak, or actually being able to see the print for the tears of laughter rolling down my cheeks! And at that point I’d only got to page 5!! The Sherbet Fountain had me unable to continue reading for some time!! Comic Timing is just perfect! I want to take this book to the BBC and say “Right I pay my licence fee, I now want you to turn this into a TV Comedy Drama!” Mr. Jason Wilkins

Sue Vincent is a Yorkshire-born writer and one of the Directors of The Silent Eye, a modern Mystery School. She writes alone and with Stuart France, exploring ancient myths, the mysterious landscape of Albion and the inner journey of the soul. Find out more at France and Vincent. She is owned by a small dog who also blogs. Follow her at scvincent.com and on Twitter @SCVincent. Find her books on Goodreads and follow her on Amazon worldwide to find out about new releases and offers. Email: findme@scvincent.com.
View all posts by Sue Vincent →
This entry was posted in Guest post and tagged Alienora Browning, book, fiction, guest author, Heneghan, new release, Wales. Bookmark the permalink.

23 Responses to ‘UNDER CADER IDRIS’: The Longest Literary Pregnancy in recent decades!~Alienora Browning