The sixth post on our visit to the Abbey of St Albans a few years ago. Parts One, Two, Three, Four and Five can be found by clicking the highlighted links.

The very first time Stuart came down to visit, long before we had any idea we were at the beginning of an adventure and even longer before we had even thought about writing together, I had stopped outside the tiny village church of Little Missenden on the way back from the station. 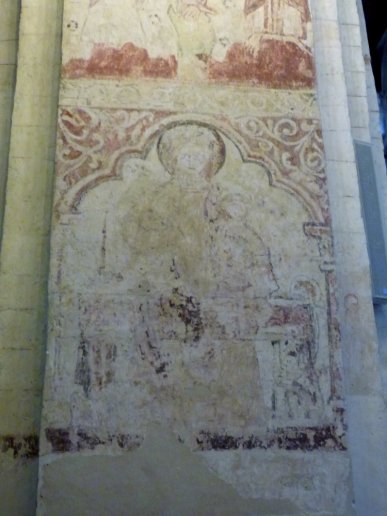 I would say, ‘don’t ask me why’ as we had never visited a church together before… and I knew so little of him then that he might have been completely uninterested… but the truth is, I do know why. It is a very special place, a good way from my home, and one I used to visit when I was working out that way, just for the peace and beauty… and it has a beautiful stained glass Tree of Life, ancient pilgrims crosses graffitied into the walls and fabulous medieval wall paintings. But that wasn’t it either. I was being prodded. 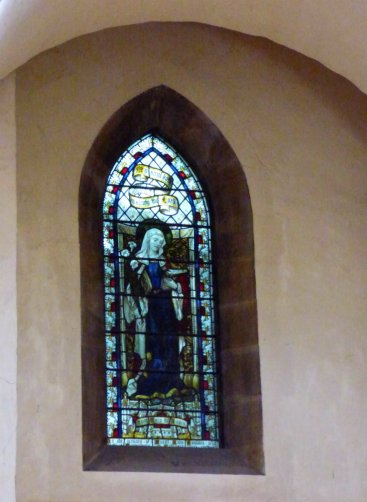 It was something we would get used to, working together, but at that point, it was a nameless, almost imperceptible, but very insistent ‘nudge’. So I opened the heavy oak door and let him into the church… and on the wall, right in front of the entrance, is a huge mediaeval painting of St Christopher, carrying the Child and bearing the knobbed club that was to lead us down so many strange pathways and eventually lead to our first book together, The Initiate.

We’d been prodded to come to St Albans too… we had put it off for a long time, for one reason or another… yet here, once more, we were faced with huge mediaeval paintings within the nave. A female saint, dark-clad and standing on some kind of platform that put me forcibly in mind of certain depictions of the Egyptian goddess Isis. Saints Alban and Amphibalus at their parting, with Alban holding the tall cross surmounted by its disc, that looks remarkably like an Egyptian ankh. St Thomas Beckett at least looked normal…. and, the hardest to decipher of the paintings… we were back to St Christopher. Once again he is depicted as a giant, carrying the club, though only the tiny figure of the Child remains clear.

““WEN,”
“Now,”
“I know now,”
“What do you now know?”
“I know the spark of Christ begotten at the Baptism is the key to universal consciousness.”
“How do you know that?”
“Because that is not St Christopher…”
“It’s not?”
“No it’s not…it’s every traveller who bears the light of Christ across the waters of the personality.”” – The Initiate

And here we were, once again, trying to decipher the forgotten language of symbols painted half a thousand years ago and long hidden beneath the whitewash. Around us light streamed in through centuries of stained glass, each panel telling its story to those without the skill to read… and to those with a mind to seek understanding from such images.

In places, paint and glass come together, seeming to erase the centuries between the artists who painted them. Victorian windows in Norman embrasures delicately painted with medieval foliage… while seekers of twenty-first century understanding look on. It is a dialogue between past and present… a whisper of the future… the images a wordless communication across the ages… and we, privileged to be part of that process, no more than tiny links in a chain that reaches both backwards and forwards beyond our sight. There is a beauty in that.

Sue Vincent is a Yorkshire-born writer and one of the Directors of The Silent Eye, a modern Mystery School. She writes alone and with Stuart France, exploring ancient myths, the mysterious landscape of Albion and the inner journey of the soul. Find out more at France and Vincent. She is owned by a small dog who also blogs. Follow her at scvincent.com and on Twitter @SCVincent. Find her books on Goodreads and follow her on Amazon worldwide to find out about new releases and offers. Email: findme@scvincent.com.
View all posts by Sue Vincent →
This entry was posted in Churches, Photography, Spirituality, Stuart France and Sue Vincent, The Initiate, travel, writing and tagged January holiday, medieval wall paintings, St Albans, stained glass, symbols. Bookmark the permalink.