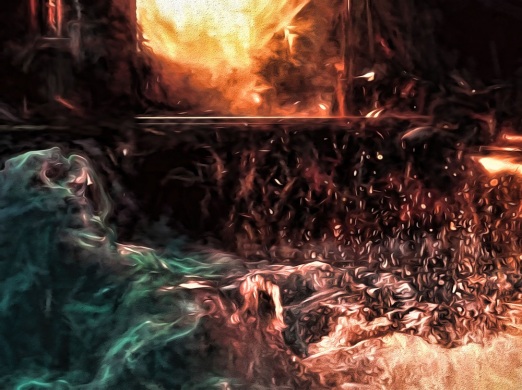 My son’s picture of the hot tub from hell

I threw the shattered remains in the bin. It had been a simple accident, and if I could not replace it like for like, it could just as easily be replaced with something different and much more affordable that would serve exactly the same purpose. It really didn’t matter… things don’t. Except, illogically, it did. I bit back totally unreasonable tears for several hours afterwards, knowing full well that it really didn’t matter… and feeling, like the proverbial camel, that it was the final straw.

I would be hard pushed to lay the blame on any one thing. There have been a host of things over the past few months and I suppose I am tired. Most of it has been an assault of pinpricks, and I have probably been running on empty for a while.

One of the major factors has been my son’s lack of a bathroom for the past three months, since it was ripped out for drying and replacement after a leak… three months where my bathroom, five miles from his home, has been his bathroom, with all that entails in terms of travel, disruption and the washing of walls. It may not seem like a big thing, but it has completely reordered the days and, by the time I get home, walk the dog again and do the necessary jobs, I am too damnably tired to even think about using the bathroom myself and have fallen behind with just about everything.

That gets to me, and it gets me down, so I was in not in the brightest of moods when I left home far too early this morning to let the workmen into my son’s home.  Granted, and with luck, it takes us one step closer to the reinstatement of his bathroom, but I would gladly have stayed mouldering in bed for a little while longer.

Once the builders and my son had been fed and supplied with coffee, I gardened, baked and cooked while he soaked in the hot tub, a therapeutic necessity that helps him get moving. My next job was to treat the water with the various sanitising chemicals, so, catching sight of him leaving the tub, I wandered out to do the needful.

He lingered talking while I worked, therefore I am blaming him. Or the worn soles of my shoes. Or perhaps Fate took a hand… for the next thing I know, I am head first in the tub. My feet slid out, tipping me forward and I did a somersault for which, my son assures me, I would have been given a perfect ten.

Soaked head to foot, I surfaced to find said son bent double and laughing fit to bust. This unseemly mirth drew the attention of the builders. It was infectious. Everyone laughed, including me.

Dripping and squelching my way to my son’s wardrobe, I purloined such clothing as could be made to fit and shoved my wet clothes in the washing machine. My son was still laughing as I emerged, sporting a stormtrooper T-shirt; well, he does have the Darth Vader ringtone allocated to me. Great guffaws overtook him every time he looked my way and I couldn’t help laughing too… and, in spite of the aches that were settling in, by the time I went home I felt much better than I have for a while.

I thought back to a recent conversation about the healing to be found in laughter. There is a lot of science to back up the benefits of laughter, from the release of endorphins and an increase in T-cells, to the lowering of blood pressure. But there is something about shared laughter that goes one step further, releasing tensions at personal levels and healing stressed relationships… even with parts of yourself. The mind may recognise what the emotions refuse to admit and what the body resists. Laughter opens the lines of communication between the sundered parts of ourselves and realigns them.

We don’t seem to laugh often enough these days. Especially not the kind of belly-laugh that involves the whole body. I wonder if we have become too shy or too conscious to laugh until we cry? If so, it would be a great shame… because laughter heals far more than we think.

* In case this colloquialism has not made it across the Pond, ‘khazi’, which may be spelled in several ways, is a slang term for a toilet or outhouse… which was once, in living memory, one and the same thing.

Sue Vincent is a Yorkshire-born writer and one of the Directors of The Silent Eye, a modern Mystery School. She writes alone and with Stuart France, exploring ancient myths, the mysterious landscape of Albion and the inner journey of the soul. Find out more at France and Vincent. She is owned by a small dog who also blogs. Follow her at scvincent.com and on Twitter @SCVincent. Find her books on Goodreads and follow her on Amazon worldwide to find out about new releases and offers. Email: findme@scvincent.com.
View all posts by Sue Vincent →
This entry was posted in Humour, Photography and tagged depression, fall, laughter, tears. Bookmark the permalink.