I was born into an era when fear and relief played equal roles in the minds of many. Fourteen years of wartime rationing had only ended a few years before and the memories of that bloody conflict were still fresh in the minds, hearts and bodies of every adult, many of whom had also lived through the Great War. Few families were intact or wholly unscathed and the scars of those years would, in many subtle ways, affect my newborn generation.

The ‘war to end all wars’ had been rapidly followed by World War II. The Vietnamese conflict was at its height, the Cold War showed no sign of abating and there was no sign at all of peace bought at a cost of millions of lives. My own father was posted on active service with the Royal Engineers just after I was born. Even for the average family enjoying the new-found freedoms of the sixties, war and its horrors were an ever present shadow.

My grandfather, who had fought in Burma, owned a cine camera and projector. Where, or how, he had acquired it, I do not know, but amongst the very earliest Mickey Mouse cartoons, home movies and silent films was another, showing live footage of the bombing of Hiroshima and Nagasaki.

That film too was silent…and partly in colour. As the clouds billowed, creating fantastical shapes in the air, he would tell of the horrors that surreal beauty was unleashing on the ground. Back then, we knew only what had been publicly released…and that was little enough. We were too close to the war and the decisions taken to end it…too close to disaster for those in power to want to share the whole truth, perhaps… but he was both artist and scientist and could deduce much from what was known. The truth about the vaporising of life at the epicentre of the blast where the temperature was as hot as the surface of the sun, the horrific burns, melted eyes and radiation sickness that decimated and destroyed so many hundreds of thousands of lives…that would take years to become widely known. 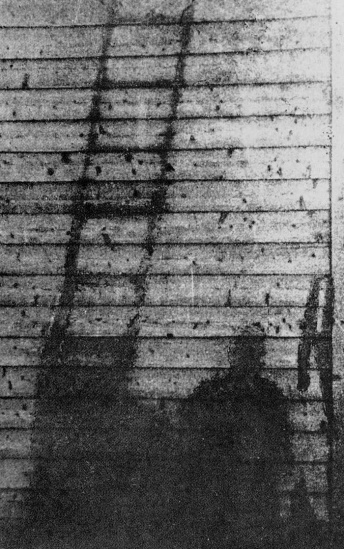 Only shadows, painted by radiation, remain of many of those vaporised at Nagasaki.

But enough was known to horrify and sow the fear of nuclear war in every heart and mind. We all knew there were secret bunkers built to protect the chosen few. We knew of the watching stations designed to give the ‘four-minute warning’ most of us would probably never hear. There were still sirens, regularly tested, and instructions on what to do during a nuclear attack. And parents made their own plans for if and when the worst should happen, knowing the makeshift shelters behind sandbags and doors would do little good.

It was in the kitchen of the modern maisonette where we lived that my mother first told me what would happen. I can see the scene as clearly now as I could then. I could describe every detail, from the reinforced glass walls, threaded with steel wire, to the pile of scones  cooling from the oven and the blackberry jam we had made together earlier that day. I can almost smell them.

“I would kill you first, then myself,” she said.

I would have been about nine years old, she in her mid twenties. Even though I understood her reasoning and the desire to protect that prompted her words, it was a shocking thing to hear and a shocking thing for a  young mother to have to contemplate.

I care little for the minutiae of party politics and posturing. I keep abreast of the news and, like the rest of the world, watch in horror at the political wrangling that threatens to use human lives as pawns. It matters not at all  who pulls the trigger if you are in the line of fire.

It beggars belief that this threat continues, that humanity’s leaders and governments continue to invest more and more money in bigger, deadlier weapons as a preventative measure against anyone actually launching them. We already have more than enough to obliterate the total land mass of the planet.

I have no answers. Perhaps there are none that include peace without that delicate balance of power versus responsibility. Unilateral disarmament is a dream that may never be realised… someone will always seek the upper hand, while ever there is power and position to be won, no matter how transient.

All I know is that I do not want any human being to suffer the horrors of nuclear war… or our children or grandchildren to be faced with the choice my mother feared. Or for our generation to go down in some silent and unrecorded history as the one that finally destroyed our home.

Sue Vincent is a Yorkshire-born writer and one of the Directors of The Silent Eye, a modern Mystery School. She writes alone and with Stuart France, exploring ancient myths, the mysterious landscape of Albion and the inner journey of the soul. Find out more at France and Vincent. She is owned by a small dog who also blogs. Follow her at scvincent.com and on Twitter @SCVincent. Find her books on Goodreads and follow her on Amazon worldwide to find out about new releases and offers. Email: findme@scvincent.com.
View all posts by Sue Vincent →
This entry was posted in war and tagged destruction, fear, fusion bomb, madness, mass destruction, nuclear weapons, war. Bookmark the permalink.