Thank you to Sue Vincent for letting me write a guest post to help promote my newest book Legends of Windemere: Ritual of the Lost Lamb.  This is the 13th book of my series and it’s where things go downhill for the heroes. Luke Callindor, the longest running hero, has been captured by their greatest enemy and they have to save him before he breaks. To do this, Nyx decides to use a forbidden ritual that requires some traveling and racing against a new agent of their enemy who is out to stop them. Of course, this isn’t surprising since Luke and Nyx have been best friends since the end of their first adventure. It didn’t take long for them to call each other little brother and big sister even though they aren’t related. They certainly have one of the deepest and strongest relationships in the series.

Yet, people aren’t always happy with this because it’s a male and female. We’ve all heard the phrase ‘men and women cannot be friends’. Seems many people believe that such a connection has to evolve into something more than friendship, but there really isn’t any rule about this. Still, there’s a big call for characters of opposite genders to hook up even if they’re barely friends. You see it in nearly every fandom and it doesn’t really factor in everything about the characters. We’ve seen it in real life when close friends start a closer relationship and the entire dynamic changes. Sometimes for better and other times for worse, but most readers that push for this assume it will always be for the better.

In the case of Luke and Nyx, it would definitely be worse. Their personalities work great to make them pseudo-siblings, but a couple like them would be at each other’s throats. As friends, a male and female character can be more free in their actions and words. We all know that we can get away with a little more chicanery with our friends than our significant others. Primarily because the friends are more likely to be involved with you. I’m not saying this is always the case since many people have a significant other who joins in the fun, but there are still different boundaries in the two relationships. Nyx calling Luke an idiot as a friend has a different weight than if she did it as his girlfriend. Luke annoying the heck out of her as a little brother is comedically adorable while him doing it as a boyfriend can get people to demand that she kick him to the curb. It’s almost like there’s more forgiveness and flexibility as friends, which is a key component of the Luke and Nyx relationship. No matter what they do, they always find a way to forgive and help.

They also work as confidants for each other, which doesn’t work if they’re dating. Again, we come down to their personalities that don’t create the same flavor of bond with the other characters. It isn’t even that they aren’t close to them, but their relationship has evolved on a path that would get ruined by romance. Yes, they have trust and support, which are important to a relationship. It’s just that it’s not the same kind and a lot of readers tend to overlook the nuances when demanding a pairing. I’m pretty sure a lot of this stems from people wanting their favorites to be together, but there are times where the aspects that make them favorites are the reasons they’d be a bad couple.

Personally, I think pushing for a romance can cause a person to miss something equally special. You focus so much on seeing something that isn’t there that you miss the real connection. Is it really so bad to enjoy a male/female friendship instead of a romance? Luke and Nyx do have romantic plotlines, so it isn’t like either one lacks a love life and should look at the other. Yeah, this is coming out as a defense for this, but it is strange that I’ve gotten many ‘when are Luke and Nyx going to hook up?’ messages over the years. It’s even led some readers to turn on their real romantic partners who have done nothing wrong. Again, you could miss something truly special if you’re only looking for romance since friendships are just as, if not more, important. After all, we learn how to make friends long before we have to figure out how to get a girl/boyfriend.

So, what are some tips to making a male/female relationship in fiction? Simply don’t worry about it. Strange to end it on that note, but that’s really the best way to go.  If you find yourself focusing a lot on driving home the fact that they aren’t a couple the you could damage the characters themselves. With Luke and Nyx, the friendship bond came about naturally. Did I ever consider making them a couple? Consider the characters were originally in a D&D and played by my wife and I, it was a thought. Yet, I couldn’t get it to gel in my head, which meant it would be forced and flimsy in the book. Luke matched better with Kira and Sari (that’s another post in itself) and Nyx with Delvin in terms of romance. That’s how it turned out when I stayed true to the characters. When I worried, things got sour and I had to rewrite until I got it in my head that I shouldn’t even tease the idea. Why mess with a good thing that will take center stage in Legends of Windemere: Ritual of the Lost Lamb? That bond might be the only thing that will bring Luke home. Maybe even in one piece.

Read an extract from Ritual of the Lost Lamb HERE

Charles E. Yallowitz was born, raised, and educated in New York. Then he spent a few years in Florida, realized his fear of alligators, and moved back to the Empire State. When he isn’t working hard on his epic fantasy stories, Charles can be found cooking or going on whatever adventure his son has planned for the day. ‘Legends of Windemere’ was his first series, but it certainly won’t be his last. 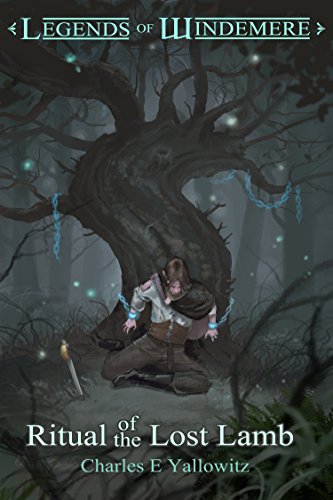 Ritual of the Lost Lamb

The latest book in the epic Windemere series

Death is a blessing that the Baron is not ready to bestow upon his precious guest.

In the aftermath of the Baron’s attack, Luke Callindor has disappeared and the only clue is a psychic scream of agony that Dariana cannot ignore. Fearing that a journey to Shayd will start their final battle before they are ready, the champions have devised another way to rescue their friend. With permission from the gods, Nyx has begun the long-sealed Ritual of the Lost Lamb. It is a complicated and exhausting spell, which is made even more difficult by a new enemy whose only goal is to make all of the Baron’s enemies suffer.

It is a race against time where every passing minute brings Luke Callindor one step closer to a fate worse than oblivion.

Follow Charles on his blog or on Amazon to be notified of new releases!

Sue Vincent is a Yorkshire-born writer and one of the Directors of The Silent Eye, a modern Mystery School. She writes alone and with Stuart France, exploring ancient myths, the mysterious landscape of Albion and the inner journey of the soul. Find out more at France and Vincent. She is owned by a small dog who also blogs. Follow her at scvincent.com and on Twitter @SCVincent. Find her books on Goodreads and follow her on Amazon worldwide to find out about new releases and offers. Email: findme@scvincent.com.
View all posts by Sue Vincent →
This entry was posted in Books, Guest post and tagged action, adventure, Amazon Kindle, champions, dragons, ebooks, epic fantasy, fantasy series, Fizzle, friendship, ghosts, griffins, heroes, high fantasy, immortality, Legends of Windemere, Luke Callindor, magic, monsters. Bookmark the permalink.