Like most mothers, I have been the recipient of some strange gifts in my time. When children are young, what seems appropriate in their eyes may seem downright bizarre to an adult observer not privy to the inner workings of their imagination. By the time your children reach adulthood, it is to be expected that the gifts settle into more conventional channels. The experience of those early years, however, may occasionally still stand you in good stead. Which is why, instead of being as confused as the dog by the significance of my son’s latest gift, I was jubilant.

He gave me a stone.

Not, I hasten to add, a scintillating gem set in gold or silver. Just a small, ordinary-looking lump of rock, very light and with a curious texture. It appears to be solidified lava.  In reality, it is something infinitely more precious. 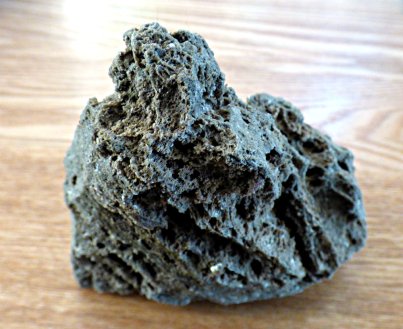 For the past couple of weeks I have been bursting with the desire to spill the proverbial beans, but as this was an experiment with the potential to go horribly wrong, I restrained my fingers from tapping out the tale.

Nick has made no secret of his desire to go travelling and see something of the world and its people. It is a desire shared by many, but for most of us it is the demands of the daily grind and our personal commitments that hold us back. For Nick, there is the additional set of problems caused by the effects of serious brain injury and severely reduced mobility. He had no idea if he could travel without extensive planning and preparation, as well as taking a carer with him…and that is not the same thing at all.

There was only one way to find out. He booked the cheapest flight he could find and a hotel…and left in the middle of the night for Tenerife. Alone.

Nick doesn’t want to be just a tourist. Beyond appreciating its beauty, he has no interest in just looking at a new place; he wants to be able to get to know it and its people.

There are unseen side-effects both from brain injury and the isolation that disability can impose. The first twenty-four hours after his arrival were pretty dire, both for Nick and for me, waiting anxiously on the end of the phone. That first night, after his call, I was ready to go and get an emergency passport… and waiting for tragedy to knock on the door.

The fatigue of the journey was compounded by obstructive and officious officials, transport unable to carry the exceedingly heavy electric wheelchair he was obliged to use and the isolation of finding himself alone in a strange country whose language he could not speak. I remembered the appalling loneliness I had felt for a while when I first went to live overseas and was seriously worried.

By the end of the second day, I had just about started to breathe again.  Over the next few days, possibilities began to unfold for Nick and he grasped them with both hands. He did things that should not have been possible. Some of them were very simple things, to most of us. What is more natural, after all, in a seaside resort, than sitting on a beach or swimming in the sea? Not as easy as it sounds when you cannot walk and the electric wheelchair you are obliged to use weighs so much it would immediately sink on sand. But he found a way.

No doubt he will write about his adventures on his blog.  Much of what he achieved has to do with his own determination to Live with a capital ‘L’. The rest has to do with people…and it was his desire to interact with people that was spurring Nick onwards. Because he reached out, people were ready to help him reach his goal, ready with shoulders to get him up…and off… the mountain, in both the literal and metaphorical sense. 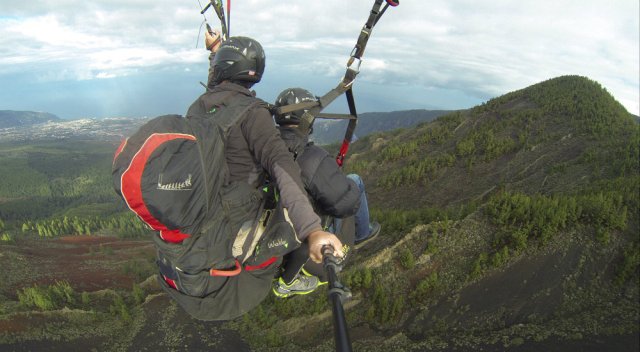 Without a doubt it was one such act of reaching out that was to have the biggest impact on my son. He met a couple of street-musicians and started talking to them. Between my Parisian days and his father’s music, the Bohemian life is in his blood… perhaps that explains what happened next. Nick made a generous gesture that could have led to disillusion and disappointment, but led instead to what he describes as some of the ‘best times of his life’ as he was made part of that Bohemian community for the remainder of his stay. For his final day, the cumbersome, untransportable wheelchair was left behind in favour of willing shoulders for an impromptu fiesta and jam session, high in the mountains, at the home of a local singer.

He had also found shoulders to help him jump off a volcano. Which is where he picked up my stone, knowing full well that I would understand what it meant.

Like all parents, all I have ever wanted for my sons was to see them happy and fulfilled. Seven and a half years ago, I watched my sons, both of them, in Hell… and watched, helpless, as they began to claw their way out after the attack that left Nick so severely disabled. I saw them both broken and have watched them both battle their way through the unseen fallout that is, perhaps, far worse than the physical, visible effects themselves. Though I say it rarely, and although I can have always seen the light in this apparent darkness, there has been a heavy weight of grief in my heart ever since.

On Christmas morning this year, I watched my younger son playing with his beautiful little daughter. His eyes soften and fill with tenderness when he looks at her or speaks of her. He smiles, with love for her shining about him, the way he shone for Nick in the hospitals.

When I came home, it was to cook a Christmas lunch to share with Nick. My own eyes fell on the stone he had given me and filled with tears.

Hope, after all, is a priceless gift.

You can now read Nick’s own account of his adventures here.

For those who do not know Nick’s incredible story, you can follow the links in the post, visit his blog or read it here along with details of a continuing campaign to raise funds towards the cost of an amazing off-road machine that allows those with mobility problems to access places normally inaccessible to wheelchair users.

Sue Vincent is a Yorkshire-born writer and one of the Directors of The Silent Eye, a modern Mystery School. She writes alone and with Stuart France, exploring ancient myths, the mysterious landscape of Albion and the inner journey of the soul. Find out more at France and Vincent. She is owned by a small dog who also blogs. Follow her at scvincent.com and on Twitter @SCVincent. Find her books on Goodreads and follow her on Amazon worldwide to find out about new releases and offers. Email: findme@scvincent.com.
View all posts by Sue Vincent →
This entry was posted in adventure, Brain injury, depression, Dreams, flight, Love, Motherhood, Nick Verron, symbolism, travel and tagged gifts, hope, surviving brain injury, Tenerife, volcanic rock. Bookmark the permalink.

95 Responses to A strange gift…