Continuing Gary Stocker’s Sunday series of posts on the folklore, ancient sites and legends of Britain. If you have similar stories to share from the area in which you live,  please read the footnote and send them in.

The philanthropic Lady Godiva (“God’s Gift”). Lady Godiva is certainly one of Coventry’s most famous (and favourite) daughters. She lived in Coventry with her husband, Earl Leofric, in Norman pre-conquest times and just after. She did manage to retain her lands after the conquest.

Anyway, I am sure that a lot of you are familiar with the legend, her husband kept on putting the rates up, which was having an economically detrimental effect on the citizens of Coventry. So she asked him not to do it again. He said that he would not if she rode naked through the streets of Coventry, so she did!

She let it be known beforehand, so everyone in respect to her modesty, stayed inside away from the windows and doors. Except for a lecherous tailor who became known as Peeping Tom. Accounts vary as to what happened to him. Some say that he dropped dead and others say that he became blind. The legend appeared about two centuries after it supposedly happened and there are various theories about what really happened, if it happened at all. Whether it did or not, I still like the idea that there are some people in authority who care about the people below them! 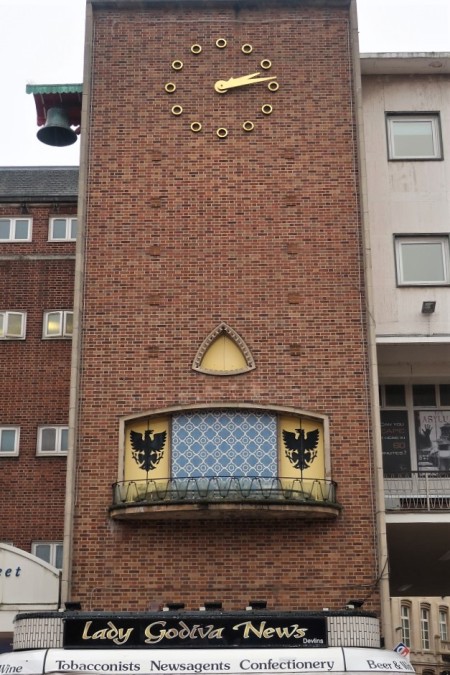 There are various statues around Coventry about this. There is a statue of Lady Godiva in the city centre. Also in the city centre is a clock. On the hour a jack of Lady Godiva comes out underneath the dial, whilst a door above the dial opens and Peeping Tom appears! Near there, under a covered walkway, is a wooden bust of Peeping Tom. He was originally in a pub called the “Peeping Tom”, which eventually became a clothes shop. Although he did remain on public view in one of the windows. 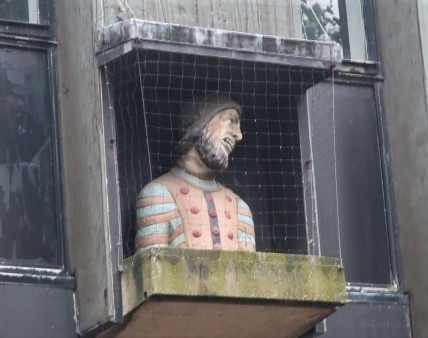 There were actually various Peeping Tom statues around Coventry. My dad and his parents were from Coventry, but had to move out when their house got badly damaged in the blitz. My grandfather had been in the First World War, but was too old for the second one. He had a reserved occupation at Riley Cars anyway. He told my dad that one morning after an air raid, one of the Peeping Tom statues (I am not too sure which one) had had a metal chamber pot put on his head in place of a protective helmet. A case of the British sense of humour shining through adversity!

Sue Vincent is a Yorkshire-born writer and one of the Directors of The Silent Eye, a modern Mystery School. She writes alone and with Stuart France, exploring ancient myths, the mysterious landscape of Albion and the inner journey of the soul. Find out more at France and Vincent. She is owned by a small dog who also blogs. Follow her at scvincent.com and on Twitter @SCVincent. Find her books on Goodreads and follow her on Amazon worldwide to find out about new releases and offers. Email: findme@scvincent.com.
View all posts by Sue Vincent →
This entry was posted in Guest post, Living Lore and tagged Coventry, folklore, history, lady Godiva, legend, Peeping Tom, protest, taxes. Bookmark the permalink.