There was a loud buzzing coming from behind the willow screen, echoing in the narrow passage beside the house. I stood still and waited, watching with a smile as the first bumblebee of spring emerged from its winter quarters.

The fog had lifted, revealing a sky of clear blue. I took off my fleece to wash the car, for the first time this year, I was too warm… and it is only February. Everywhere you look there are signs of spring and it lifts the heart.

Looking up, I caught sight of the year’s first butterfly, a good month earlier than the last two years. Once again, it was a deep yellow… almost golden.

I thought back to something I had written a couple of years ago, because, as always, a yellow butterfly takes me straight back to childhood and Moomin Valley, for…

“…as everyone knows, if the first butterfly you see is yellow the summer will be a happy one. If it is white then you will just have a quiet summer. Black and brown butterflies should never be talked about – they are much too sad.” Tove Jannson, ‘Finn Family Moomintroll’.

I could even ‘see’ the old picture of Moomintroll and the Snork Maiden, sailing on clouds and, perhaps because of the underlying chill in the air, thought of the poor old Groke, a creature of darkness and ice whose passage froze the ground beneath her. I remembered another of Jansson’s illustrations; always misunderstood and inspiring fear, the Groke was chased away whenever she appeared, as unwanted as winter. 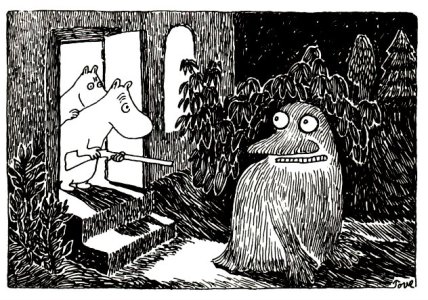 Yet for all her unlovely appearance and her unintentional freezing of everything she touched, the Groke herself sought only light and warmth… and an end to the loneliness of her existence. I always felt sad for her. Something nagged at me about that.

It certainly wasn’t her appearance that upset the residents of Moomin Valley; given the rest of Jansson’s illustrations, the Groke should have been right at home. She didn’t bring fear deliberately either… no-one can be held responsible for the mechanics of their physical nature. It is no more the fault of the bird that it flies, than the fish is to blame for swimming.

Was her desperate quest for warmth and light overpowering? Was her lonely sadness too much to bear? It is possible… the pain of another often makes us uncomfortable. But those attributes were not a deliberate act on the part of the Groke, but a reaction to her own circumstances.

Maybe it wasn’t her that was the root of the problem. Perhaps it was simply her presence? Maybe it was the reactions of those who pushed her away that were really at fault? Reactions based only upon assumptions and partial knowledge… and the way her physical being interfered with the lives of the residents of the Valley. It meant that she was ostracised and isolated, thus compounding the problem and increasing her sadness, creating a vicious circle.

With a touch of tragic irony, it may even have been the actions of the enigmatic Snufkin and his magic potion that created the Groke in the first place. Dripping the potion onto an ant, it became a Groke, perhaps the Groke… and an ant, after all, is the most social of creatures and comes to life in the warmth.

Snufkin, on the other hand, is always admired for his wisdom and freedom of spirit, especially by the young Moomin. An attractive character, I admired him myself, but there was always a sense of a dangerous edge… like the time he planted Hattifattner seeds in the Park Keeper’s garden…

I don’t suppose for a moment Tove Jansson had such irksome ideas when she created her characters. She wrote weirdly wonderful children’s books that many of us loved and remember with fondness. Jansson wrote and illustrated the first of the Moomin books in 1945 as a reaction to the depression of wartime. She wanted to write something ‘naïve and innocent’ and in that she succeeded. They remain some of my favourite childhood tales and my granddaughters are now collecting her books… even if they haven’t realised it yet.

All the best books have something to teach and children’s books particularly so. It is sometimes only when looked at through the eyes of adulthood that those lessons really become visible… and the spark that illuminates the lesson must come from our own observations and experience. We put the faces and forms of those around us into the stories that we read as a child… and it is then that every storyteller becomes their own illustrator.

All images by Tove Jansson. The final image is her self portrait.

Sue Vincent is a Yorkshire-born writer and one of the Directors of The Silent Eye, a modern Mystery School. She writes alone and with Stuart France, exploring ancient myths, the mysterious landscape of Albion and the inner journey of the soul. Find out more at France and Vincent. She is owned by a small dog who also blogs. Follow her at scvincent.com and on Twitter @SCVincent. Find her books on Goodreads and follow her on Amazon worldwide to find out about new releases and offers. Email: findme@scvincent.com.
View all posts by Sue Vincent →
This entry was posted in Art, Books, fiction and tagged appearances, children's books, hattifattners, misunderstanding, Moomins, ostracised, Snufkin, Sork Maiden, the Groke, Tove Jansson. Bookmark the permalink.

65 Responses to The first butterfly…