Ani’s Advent Invitation: What is magic? A holiday story (and a new book!) from Allie Potts

So, the question is a bit of an odd one around here, what with my two-legs being a bit weirdly inclined and all… What is magic? For me, magic is finding the fridge door, or the back gate left open… or my boys coming to play. That might be the best of all. But Christmas magic is waking up to find a whole Christmas tree decorated with tennis balls! It even had a chicken star on top!

She couldn’t have done it, ’cause I keep an eye on her every morning, just in case there is any chance of her going into the cupboard where my treats are kept. And there was no-one else there, so it must have been Santa!

She says magic means different things to everyone. I s’ppose she’s right. I don’t think the fish would have been impressed with a tennis ball tree. They got fresh vegetables… but I wouldn’t have been overly impressed with them myself.

Allie Potts, who has just released a brand new book, thinks magic is something else entirely… though I think it all comes down to love in the end…

As an adult, it is a trick, an illusion or redirection, something we don’t fully understand. But to a child magic can mean any number of things.

My mother introduced me and my sisters to the arts at an early age. She would have us dress us up, letting us wear miniature fur coats and costumed jewelry, before taking us to see various theater productions. It was a treat – a chance to let us play at being grown up while still giving her the opportunity to enjoy us as children.

One December she took us to see Tchaikovsky’s Nutcracker.

I watched in wonder as the Christmas tree in the center of the stage grew in front of our eyes, expanding until it was less prop than a backdrop. The rats and the toy shoulders battled. A cannon was rolled out. Bang. A cloud of smoke billowed. Then a young girl named Clara stood up to the danger. She struck with the only weapon available, her shoe, and thus saved the day.

Fairies arrived, dancing pastries too, and though few words were spoken, the story held my rapt attention.

Then the performance was over. We made our way back to our car to return to our regular lives.

I was usually one of the last to emerge from my room on Christmas morning. I was no less excited at the thought of what presents Santa might leave than my sisters, but I’d realized that the sooner gifts were opened the sooner the best part, the anticipation, the waiting for Christmas would be over. You see, once gifts are opened, their contents are real for all to see. You know what they are, but at the same time, you know what they aren’t and what they can never be.

Before then, I knew those brightly colored mystery boxes can contain any number of things: a dollhouse, a 5000 piece LEGO set you’d been told contained far too many pieces for Santa’s elves to supply, a new bike, a jetpack, or even an orange princess. (An aside, I still don’t know what exactly an orange princess is, but it appeared once on my son’s first hand-written letter to Santa, so it must exist, if only in dreams).

And so while I would wake as early as any, I would typically lay in my bed until the voices of my sisters down the hall demand I join the family.

That morning I turned over to find a more comfortable position, tucking my hand under my pillow for added support. My fingers felt something cool. Something smooth. There, under my pillow was a simple ornament, a small fairy princess, made of blown glass, dancing on one toe. It was my very own sugar plum fairy.

I was delighted. However had it appeared under there without my knowledge? It was magic. I ran around the house eager to show it off.

I learned my sisters woke to find sugar plum fairies under their pillows too.

They were a matching set. Until they weren’t. I was still a child after all, and children make mistakes. My fairy princess slipped, breaking one delicate dancing foot off her leg. But Santa had already come and gone. There was no more magic to fix it, but I didn’t mind. Rather than detracting from her beauty, if anything, her flaw made me love it more. It marked her as mine.

That Christmas another present under the tree waited for me. It was a green nutcracker just like I’d seen at the ballet with a working jaw and a soft gray beard, and unlike the ornaments, this present was one of a kind, and just for me. My mom had seen how the play’s magic affected me.

Other nutcrackers followed, year after year until the gift became a tradition between my mom and me, a magic unto itself. They now cover my mantle and fill the corners. Unfortunately, I ran out of room and the tradition had to end. But even now, years later, a green nutcracker with a soft gray beard assumes a center spot and a small glass one footed fairy reflects the light as it dances and dangles in my Christmas tree. They are my regular reminders that magic is real, if only you choose to believe.

Allie Potts is the author of The Fair & Foul, Project Gene Assist Book One and is celebrating the launch of the second book in the series, The Watch & Wand. Set in a not too distant future, the series takes place at a time when science meets magic and biology merges with technology, and tackles what it means to be human.

Additionally, she is the author of An Uncertain Faith, a Rocky Row Novel, a cozy mystery/women’s literature story written for those who find themselves caught between a rock and a hard place.

When not finding ways to squeeze in 72 hours into a 24 day or chasing after children determined to turn her hair gray before its time, Allie enjoys stories of all kinds. Her favorites, whether they are novels, film, or simply shared aloud with friends, are usually accompanied with a glass of wine or cup of coffee in hand.

A self-professed science geek, book nerd, and believer in the possibility of magic, Allie writes everyday style stories, flash fiction, tips and tricks, and the occasional not-a-review review at www.alliepottswrites.com. 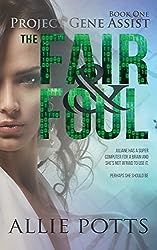 Juliane has a supercomputer for a brain and she isn’t afraid to use it.
Perhaps she should be.

Juliane Faris is a brilliant programmer determined to change the world through scientific and technical advancement. Blinded by ambition, she will do whatever it takes to secure her legacy including agreeing to participate in an experimental procedure. The procedure grants her unprecedented knowledge and cellular control over her body but threatens everything she holds dear including her sanity. When others undergo the same modifications it becomes apparent that not everyone can afford the price that this technology demands.

The line between biology and technology is blurring, and what seems like magic is only a scientific discovery away.

Set in the not too distant future, and rooted in technology being developed and today, The Fair & Foul is earth-based science fiction dealing with the next era of human evolution. 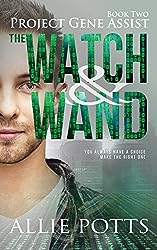 “I’d ask if you are ready, but I suppose it is already too late.”

Fifteen years have passed. The future no longer seems as bright. Between a war declared on all but the most basic technology, worldwide economic collapse, and a plague-spurred global panic, governments have collapsed leaving law and order to be defined by those left behind. Stephen knows he should be grateful, but can’t help wishing his life was more than survival.

That was until he met a girl on the run from a group known as the Watch.

Now, caught between rival factions with their own hidden agendas, Stephen has no choice but to go on a mission to reclaim a piece of missing technology.

He is told the device is the key to a better future, but in the new order, one person’s salvation can be another’s total destruction.

Sue Vincent is a Yorkshire-born writer and one of the Directors of The Silent Eye, a modern Mystery School. She writes alone and with Stuart France, exploring ancient myths, the mysterious landscape of Albion and the inner journey of the soul. Find out more at France and Vincent. She is owned by a small dog who also blogs. Follow her at scvincent.com and on Twitter @SCVincent. Find her books on Goodreads and follow her on Amazon worldwide to find out about new releases and offers. Email: findme@scvincent.com.
View all posts by Sue Vincent →
This entry was posted in Books, Dogs and tagged ballet, Book launch, Christmas, festive magic, humour, new book, Nutcracker, science Fiction. Bookmark the permalink.

44 Responses to Ani’s Advent Invitation: What is magic? A holiday story (and a new book!) from Allie Potts