“I don’t know what to do…” Just from the tone of voice on the phone, I was already getting my things together. He explained. And I really couldn’t believe my ears. “A baby bird flew into the kitchen… jumping up and down isn’t going to do you much good, mate… I’ve opened the window but it isn’t going anywhere.”
“Want me to come down?” I was already locking the door.
“Might be an idea…”

What are the chances? First, I have a young wren chirping at me on my keyboard, then, five miles away, a baby bird flies into my son’s home. I would say it isn’t every day that birds fly into your home but…

Thankfully, in the time it took me to get into town, the bird had found its way to the open window. It had just jumped out and hopped into a bush, said my son, on his way outside to check if he could see it. He was concerned because it was so small… and he has a predatory cat. There was no sign of the bird…it had obviously recovered and found safety.

“How small was it?”
“Tiny…”
“Robin sized?”
“Smaller… look…” He produced the phone that never leaves his person and showed me a video. The poor little bird was hopping up and down, able to see the outside, but never having encountered glass from the inside, it could not figure out how to reach it. From the outside, window-glass is visible, covered in reflections and solid. From the inside, it disappears. The poor little creature could not have known.

It looked like a wren, but you couldn’t see properly as it was moving so fast… and anyway, under the circumstances, that would be just too strange. 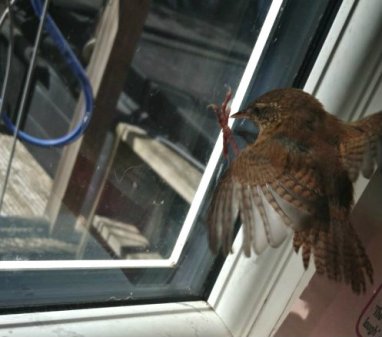 We went inside and had a proper look at the video, frame by frame. The first decent shot showed the colouring on its face. Maybe a warbler of some sort. Then we looked at the rest… and compared it to my earlier pictures of my wren…then looked up wrens on the RSPB website. 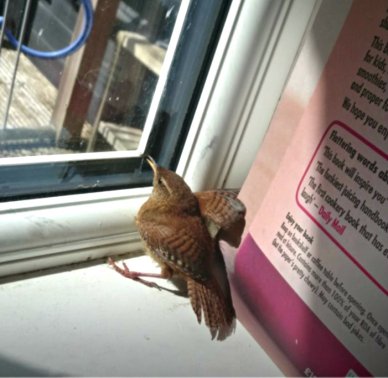 “So, what is the symbolism of Wren?” I told him the tale of the King of the Birds, he looked up some of the basic symbolism online… and I shared some more. Oddly, or perhaps not, no matter which way we looked at it, the symbolism was wholly appropriate. Even its Latin name… Troglodytes troglodytes… cave-dweller… seems appropriate, given where we are right now in our adventures…

It does make you wonder… 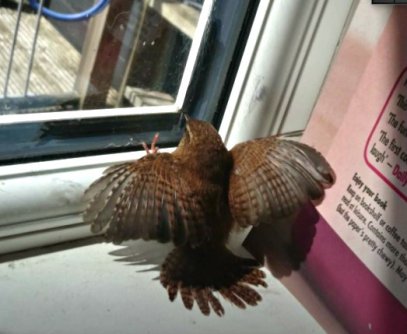 Sue Vincent is a Yorkshire-born writer and one of the Directors of The Silent Eye, a modern Mystery School. She writes alone and with Stuart France, exploring ancient myths, the mysterious landscape of Albion and the inner journey of the soul. Find out more at France and Vincent. She is owned by a small dog who also blogs. Follow her at scvincent.com and on Twitter @SCVincent. Find her books on Goodreads and follow her on Amazon worldwide to find out about new releases and offers. Email: findme@scvincent.com.
View all posts by Sue Vincent →
This entry was posted in baby birds, Birds and tagged Animals, bids, coincidence, guidance, kinship, synchronicity. Bookmark the permalink.

38 Responses to …and hello again…