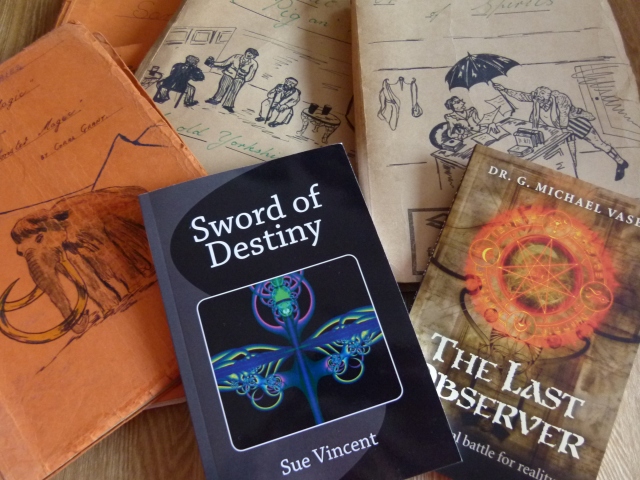 On the table beside me as always is a pile of books and manuscripts. Some I am waiting to read, some I am working with, and some I am currently working on… and trying to format the pictures for The Initiate is no joke… I’ve been at it for days….!

Though the proof copy of Sword of Destiny makes me smile. Any day now…

Amongst the books is a sheaf of tattered manuscripts… books my mother wrote many moons ago and which have lain in a forgotten corner for years. She gave them to me recently. I promised her once upon a time that if she didn’t get them published I would try and do so one day. I’m working on that. Some are children’s stories I have barely read… I was married by the time she wrote them… there is a romantic novel, the scripts for her BBC radio broadcasts of dialect tales and, best of all, two wonderful books I am dying to find the time to re-read.  I adored them. They are tongue-in-cheek romps across the invisible barriers of society.

It doesn’t matter if the books are themselves a ghost of other years and gentler times. I grew up with the characters … which is odd, considering most of them are dead. Apart from old Horace and his young wife Elissa, who is very much alive.

For me, as a girl, it was the ghost of a Cockney barrow boy named Charlie ‘ardacre who captured my imagination with his charm and his cheerful  proclivity for appropriating anything valuable and loose… including, it was implied, Elissa.

Of course, I am older now, more inclined to be critical… and I am hoping, really hoping, they are as delightful as memory and imagination painted them.

Beside them lies Gary Vasey’s latest book, The Last Observer. This I have read recently… was, in fact, fortunate enough to read chapter by chapter as it was written. It is the story of an ordinary guy, Stanley, caught up in extraordinary events in a psychic battle for the control of reality as we know it. You could read the cover and think it is simply another lurid tale of black magic. You would be wrong. True, it is a fast moving adventure where murder and mystery shadow every page… and a darned good story to boot…

But there is much more to The Last Observer than that. Within the story Gary explores the nature of reality and our relationship with it from the twin perspectives of science and esoteric thought. He shows how closely allied are quantum physics and magic in their definition of that reality. In many respects, only the terminology differs.

Anthony Peake writes in his Foreword, “.. the most staggering disclosure of modern science is that the universe needs an observer in order to exist.” Esoteric thought has always taught that we create our own realities.

Which is, of course, why I am reluctant to re-read my mother’s books. In my mind they are still fabulous… memory is my reality here. The objective reality of re-reading the books may change that perception. And although I have no reason to doubt… my mother was, after all, a successful writer in her younger years… emotion creeps in and I am afraid of having my cherished illusions coloured by the observation of reality from a perspective some decades older.

Which sort of proves the point of Gary’s book, really. Our perceptions change all the time, coloured by age, experience, emotion and our own inner evolution. And because we see the world differently, it is different for us. Science observes this phenomenon; esoteric science harnesses it through the use of controlled imagination.

Me? I am busy imagining that little box on the screen that says the image files for The Initiate are all good to go…

Sue Vincent is a Yorkshire-born writer and one of the Directors of The Silent Eye, a modern Mystery School. She writes alone and with Stuart France, exploring ancient myths, the mysterious landscape of Albion and the inner journey of the soul. Find out more at France and Vincent. She is owned by a small dog who also blogs. Follow her at scvincent.com and on Twitter @SCVincent. Find her books on Goodreads and follow her on Amazon worldwide to find out about new releases and offers. Email: findme@scvincent.com.
View all posts by Sue Vincent →
This entry was posted in Books, Life, Love and Laughter, Spirituality, The Silent Eye and tagged Books, Life, motherhood, spirituality, yorkshire. Bookmark the permalink.

6 Responses to Words and pictures