‘Rapunzel’ and ‘Aurora’, dressed in their pink satin gowns and flanked by the painted rainbows they had stuck to the window, bounced excitedly on the back of the sofa, smiling, waving and shouting, “Grandma!”… I could hear them from the car as I pulled up outside, grateful to have at least this much contact with them. While ‘Rapunzel’ seemed to understand that, for once, my arrival would not mean silly games and mischief, ‘Aurora’… two-year-old Imogen… just wanted the window between us opening so I could unwrap the chocolate bar she was brandishing… but she was happy to wait for her Daddy to do that while she and her big sister told me about the ladybird they had found in the garden and ask when I’d be allowed to come and play. 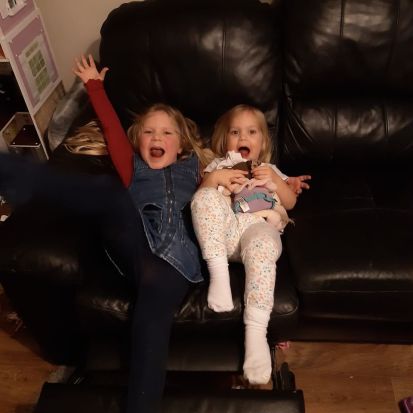 ‘Rapunzel’… five-year-old Hollie … wanted to know where my Ani was. The friendship between the little girl and the over-excitable floppy dog is a fairly recent development. For a long time, the dog wanted to be friends, but the little girl, who also wanted to be friends, was understandably wary. A few tentative overtures were made that saw her fleeing to her father’s arms, but it took a while for the trust to build. Now, though, they have become inseparable and they are a delight to watch together.

The elderly dog becomes a grinning puppy again while her two-legged friend takes charge, issuing commands, throwing a well-chewed ball and sneaking more treats to the happy dog than she should have in a week. Now that the trust is there, they seem to be perfectly matched, with each giving and sharing a joyful understanding. They are, quite visibly, on the same wavelength. Dogs and children understand each other… and Hollie seems to be missing her new friend. 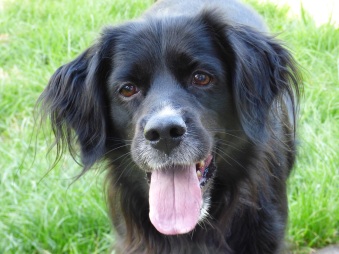 I stood in the middle of my son’s front lawn, sharing a loud conversation with my granddaughters through the closed window, glad that I was able to see them at all when so many families are now separated by more than just distance. Like everyone else since this crisis began, we have stayed away from each other. I only saw them today because their Dad needed me to pick up some things from the shop on my way home from work.

“I never thought I’d be grounded at my age! It feels like being in prison” said their father as I made my socially distanced delivery. My younger son has been working all hours shipping sanitising products but is now in quarantine with suspicious symptoms. We are hoping it is no more than a seasonal bug as he doesn’t feel particularly unwell, as his partner has it too and there is no way to keep parents and young children apart in a small house.

A couple of doors down from my home, another set of grandchildren have found a novel way of making their grandparents smile. Their message has survived both frost and rain and it warms my heart every morning when I see it… and it must do so much more for the couple for whom it was intended. “We love you and miss you both” is chalked, in a child’s handwriting, on the pavement right outside the door. 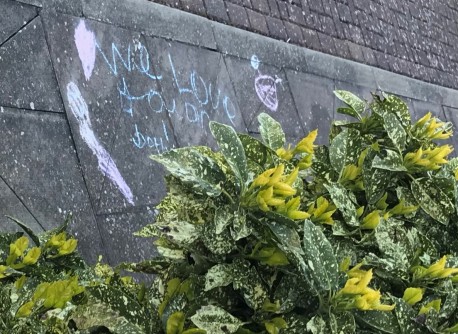 Then I came home to find one of my next-door neighbours putting up a new fence. I had done one side of my garden when the gales blew it down… so now, both sides are neat and new. Unfortunately, the guy who was supposed to be taking away the remains my old fence never did so. My neighbour had quietly loaded my old fencing onto his truck with theirs, disposed of the lumps of concrete from the rotten posts… and while he was doing so, fixed the dodgy lock he had noticed on my back gate too.

Little acts of kindness and thoughtfulness go a long way to lifting the spirits and relieving a sense of isolation… and sometimes, it really doesn’t take a great deal to raise a smile.

Sue Vincent is a Yorkshire-born writer and one of the Directors of The Silent Eye, a modern Mystery School. She writes alone and with Stuart France, exploring ancient myths, the mysterious landscape of Albion and the inner journey of the soul. Find out more at France and Vincent. She is owned by a small dog who also blogs. Follow her at scvincent.com and on Twitter @SCVincent. Find her books on Goodreads and follow her on Amazon worldwide to find out about new releases and offers. Email: findme@scvincent.com.
View all posts by Sue Vincent →
This entry was posted in Life and tagged Dogs, family, grandchildren, isolation, kindness. Bookmark the permalink.

63 Responses to Raising a smile