One summer, a few years ago, my wife and I traveled across Canada in our brand-spanking-new, never-owned-one-before, travel trailer. (a feat that, all by itself produced many hilarious and painful stories)

From our home in the Fraser Valley of British Columbia, we trekked north-east to the feet of Mount Robson, (in the Canadian Rockies) thence south-east across the prairies, through Edmonton, Yorkton, Winnipeg, Thunder Bay, (where we went gem-hunting at an amethyst mine) Sault Ste Marie, Hamilton, to Niagara Falls. We did all sorts of fun touristy things there, a winery tour, the butterfly conservatory, but the falls towered (heh) above all else. They are worthy of visiting if you’re ever in the neighborhood.

From Niagara Falls we took a quick detour through Michigan, and hopped back into Canada via Sault Ste Marie. Then, back through Thunder Bay, Winnipeg, and took a slightly different route through Regina, Moose Jaw, Medicine Hat, Calgary, Revelstoke, Kamloops, and home. Ten thousand kilometers in thirty-one days!

Between Medicine Hat and Calgary we visited Dinosaur Provincial Park. (fossilized dino’s and dramatic canyons) To get there we drove along a rutted dusty dirt road, through the flattest of the flattest part of the Prairies. (I hadn’t seen anything that flat since I crossed the Nullabor Plain, in Australia, on the Indian Pacific train)

We’d been traveling for many long weeks, and I hadn’t seen anything resembling a decent hill, let alone a mountain, since we left Mount Robson. I was getting a little punchy.

I wrote this story in order to retain my sanity.

A long time ago, before history was written down, the People, who could trace their ancestry back to the First of Those Who Ascended, told stories, mother to daughter, of how the Second World evolved from the upheavals of the First World.

It is said that the First World was a series of prairies, grasslands, criss-crossed by tannin-stained rivers and streams, that spanned the whole world. The oceans, filled with soft sweet water, only existed far to the south and north.

One day a traveler, from a star that can be seen only on the darkest of nights, and her star-traveling ship, crashed in the middle of the Great Prairie, which was the flattest and longest and widest of them all. Her ship was so badly hurt, that she couldn’t return to the stars or even tell her People what had happened to her.

Resigned to her fate, the traveler set about learning from the prairie plants and animals how to survive. For many harsh winters and blistering summers the traveler explored the flat lands. Sometimes she’d weave bridges of rushes and make fords of stones across the slow moving rivers that wound back and forth across her path. She used these, and other such small projects to distract her mind and occupy her hands, because the flatness of the land, which was so different from her home, was slowly driving her mad.

One day she sat down in the middle of a small creek and looked up at the shallow banks on either side. If only she could dig herself deeper, she thought, then perhaps her madness would leave her alone for a while. She sprang up and spent many long months journeying back to her ship of the stars, where she forged a shovel and wheelbarrow, and began to dig.

She dug a great moat around her ship, deep enough for water to seep into it, and piled all the dirt on top of her ship, burying it forever. Her madness retreated, as she hoped it would.

The dirt on top of the ship made quite a hill, and she decided it might be nice to climb up and feel the cool wind on her face. When she stood on top of the hill, all she could see, in all directions, was the flatness of the land surrounding her little hill-and-moat, and her madness returned.

She started digging again. Deep trenches, and long ridges of the dirt she’d excavated, radiated out from her moat, far to the north and south, until they reached the far oceans, which weren’t salty yet, which flooded the trenches. But still her madness was not sated. She dug and piled, and dug and piled, until the lowest reaches of her new trenches were hidden in dark shadows and her piles reached up to the clouds.

Finally, she was satisfied and went to lay down her tools, only to find her shovel and wheelbarrow had become part of her. Or perhaps, she decided, she had been digging for so long she had simply become the tools. The traveler laughed, a deep and healing laugh, took a long drink from the lake she had just dug, and went back to work, disappearing into another trench.

At first the plants and animals of the prairie were afraid of the changes the traveler had wrought on their world, so they called a great Convocation of all Beings, and agreed to explore the new lands that had been created.

Some of the animals grew thicker fur or learned how to swim, and climbed to the tops of the piles of dirt that were mountains, or went to the trenches that were great lakes and mighty rushing rivers. And some remained as they were and stayed where they were.

Some of the plants grew tall and strong, or short and stout, and changed the shapes of their leaves, and followed the animals into the great mountains and deep lakes. And some remained as they were and stayed where they were.

As far as anyone knows, the traveler is still out there digging more lakes and piling up new mountains.

And that is how the Second World began.

I was born in England on a crisp autumn eve in 1958, emigrated to Australia at the tender age of two, and moved to Canada in 2004 where I married the love of my life. I left school when I was fourteen, and thereafter continued my education via libraries, books, and whatever Life decided to throw my way.

I’m a Shaman, a lesbian, a writer of Science Fiction, Fantasy, and Fiction. I’m a bicyclist, a feminist, a gardener, a crafter of clay … I’ve been an architect, a seamstress, an athlete, a field hand …

Being a Shaman is the Thread of my life from which all else is woven. Writing is one of my Great Passions, novels specifically, short stories occasionally, and always with lesbian characters.

I adopted ‘Widdershins’ as a username in the early days of the interwebz, and it stuck … because I am, if nothing else, contrariwise. Also, it’s witchy, whimsical, and wild.

One day, late in my high-school career, in order to avoid writing a very boring science essay, I turned in a short science fiction story instead. It incorporated the information in the essay, but in a much more readable form. (in my humble opinion)

When I handed it in I caught a glimpse of my teacher’s face as she started reading it, she’d turned rather pale. I discreetly exited the room before her ability to speak returned.  As I fled I heard a bark of what I hoped was laughter, but it could’ve been an incipient heart attack. Only time would tell.

Upon recieving the marked essay back I saw the following scrawled across the top. ‘Don’t ever do this to me again.’ Somewhere in the middle was a, ‘Well Done.’ In the bottom left-hand corner  was a very large red ‘A’.

That was the moment my career as a writer began.

I always wanted to know the layers of ‘why’, about everything, and to see beyond the horizon, all the horizons. I found answers to most of my ‘why’s and wherefore’s’ about things of a physical, intellectual and emotional ilk, but the spiritual … hmm … that evaded me. So I engaged with the obvious first, but found far too many holes in traditional religion, and any practice that required genuflecting to a guru didn’t do it for me either, particularly if there was some bloke at the top of things telling everyone else what they should or shouldn’t do in order to achieve his vision of … whatever he wanted.

I read everything I could get my hands on, and quested among New Age philosophies, and ‘eastern’ practices. (a good many of which, unfortunately, fell into the above mentioned ‘bloke-at-the-top’ category)

Then I discovered the women writing about feminist politics and spirituality from a woman-centered perspective. Women like Mary Daly, Colette, Kate Millett, Diane Stein, Starhawk, Monica Sjoo, Dale Spender, Vicki Noble, Clarissa Pinkola Estes, and many, many others.

After much searching I came to understand that what moved my Spirit was an Earth-based, Goddess Spirituality, the First Mother of Us All.

And so, my Journey to become a Shaman of Her Path began, with ‘Prelude’. 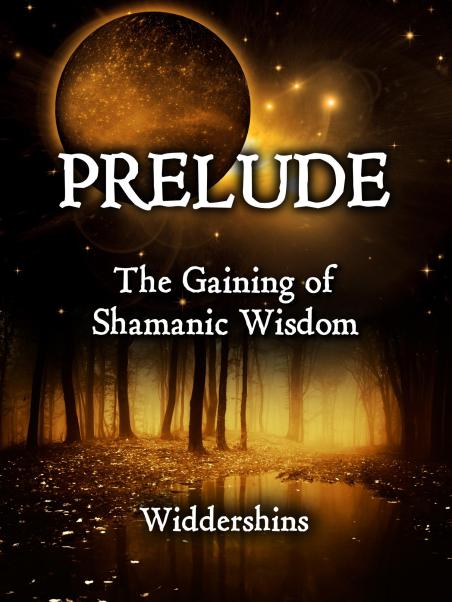 Shamans come in all shapes and sizes, from all walks of life, from all the continents of the Earth. We’ve been around since the human race realized there was more to existence than just the physical, and we’ll be around long after the last star has died, when the Wheel turns to renew All.

Becoming a Shaman is not for the faint-of-heart, or the timid-of Spirit. It is not an easy Path, nor should it be. The responsibilities are great and require harsh testing before one is judged capable of shouldering them.

There are many Pathways to becoming a Shaman, and I came to understand mine through my Earth-based, Goddess Spirituality, She who is the First Mother of Us All, in all Her forms.

‘Prelude’  is the story of my very first steps along that Path. It is part memoir, part Shamanic adventure, and part guidebook, with a dash of dire warning on the side.

From the moment I came across a giant statue of Bast, I knew my life would never be the same. There were times I froze, bled, burned, raged, and cried.  My life, my past, the shadows, and the shining moments, all the things I believed defined me, were challenged, until nothing but a truth, my Truth, remained.

Join me as I confront my monsters, discover my true Name, and come to understand that the Physical world I grew up with was just a tiny corner of a much vaster Cosmos.

Buy your copy of Prelude by Widdershins at:

Sue Vincent is a Yorkshire-born writer and one of the Directors of The Silent Eye, a modern Mystery School. She writes alone and with Stuart France, exploring ancient myths, the mysterious landscape of Albion and the inner journey of the soul. Find out more at France and Vincent. She is owned by a small dog who also blogs. Follow her at scvincent.com and on Twitter @SCVincent. Find her books on Goodreads and follow her on Amazon worldwide to find out about new releases and offers. Email: findme@scvincent.com.
View all posts by Sue Vincent →
This entry was posted in Guest post and tagged creation myth, hills, launch, new book, road trip, shamanic path, shamanism, short story. Bookmark the permalink.

35 Responses to Guest author: Widdershins ~ Prelude: A new book and a new world…