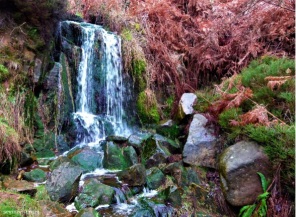 There were tears in seventeen-year-old Latoya Kelly’s eyes as she hiked toward the small waterfall and realized this would be her last Hrtedyp. It was always held on the first full day after the Fall Equinox, precisely at 4:33 p.m. She had only been five when she had her first Hrtedyp, and that had been by accident. She had been camping with her parents and grandparents, and the tiny child wandered off. She had been lost, and hungry, and scared, but by the time Daddy found her, she was full of Bueno Nacho, Everlasting Gobstopper, and was laughing and singing in a language nobody knew anything about. She tried to tell Mommy and Daddy about the Hrtedyp, but they thought she’d fallen asleep and had a dream.

Every year, they’d camp in the same place to welcome autumn, but she hadn’t been able to sneak away again to attend the Hrtedyp until she was eight. Then, she always made an excuse, year after year, to go on a hike alone, always from just before four until right after sunset.

Continue reading at Powered by Robots

Sue Vincent is a Yorkshire-born writer and one of the Directors of The Silent Eye, a modern Mystery School. She writes alone and with Stuart France, exploring ancient myths, the mysterious landscape of Albion and the inner journey of the soul. Find out more at France and Vincent. She is owned by a small dog who also blogs. Follow her at scvincent.com and on Twitter @SCVincent. Find her books on Goodreads and follow her on Amazon worldwide to find out about new releases and offers. Email: findme@scvincent.com.
View all posts by Sue Vincent →
This entry was posted in photo prompt, Photography and tagged #writephoto, amwritingfantasy, elves, family, fantasy, maturing, Mindlovemisery's Menagerie, Sue Vincent. Bookmark the permalink.