“Would you like to restart your PC now?” I growled at the pop-up on the screen. No, I would not… I was busy. I clicked a box that consigned the message to Hades, while asking it to remind me later. For three days, it did just that, each time picking the most inconvenient moment it could manage, and each time being banished to the Nether Regions with the click of a mouse.

The fourth time it reminded me, I knew I was going to have to give in… but not right then. I was deep in research, in thrall to words… and there was no way I was going to stop while a whole batch of probably unnecessary updates installed themselves, like it or not. I dismissed the thing and carried on writing until that queasy feeling made me glance at the clock. One a.m… Given that I rise pretty early and had to be at work by eight, I thought I should go to bed. Cleverly, or so I thought, I clicked on the option that said ‘update and shut down. The PC could install its nonsense while I slept. Perfect.

So engrossed was I by the work I had been doing the night before, that I woke even earlier than usual next morning, bright-eyed and raring to get back to the screen. I could see to the dog and still have a couple of hours to catch up with the blogosphere and write some more. I flicked on the PC then wandered through to the kitchen to make coffee and give the dog her morning cuddles and breakfast.

It was on my return that I realised the error in my perfect plans. Had I not been so sleepy, I might have realised sooner and asked the thing to ‘update and restart’ while I slept. Instead, I was faced with that dire blue screen and the cheerful message that ‘updates are 1% installed!’ This was going to take a while…

So much for my plans. 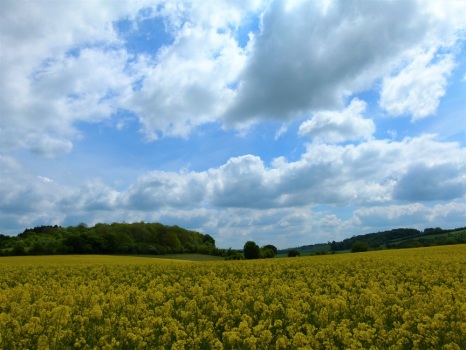 My initial reaction was one of annoyance. I have my habits on a morning and was not happy about being forced to change my plans. I could have stayed in bed! Except, I was wide awake anyway. I could use the laptop… but the files I needed were on the PC. Annoyance gave way to frustration…neither reaction a productive use of my time. I cuddled up with the dog, which is never a waste of time, and reviewed the situation.

While it is true that I work best early in the morning and late at night, those are not my only options. The weather was looking less than promising. How about, instead of writing, I did all the housework, such as it is, and took longer-than-usual walk with the dog instead? My furry friend agreed that this was a good plan…and one to be implemented without delay.

Sue Vincent is a Yorkshire-born writer and one of the Directors of The Silent Eye, a modern Mystery School. She writes alone and with Stuart France, exploring ancient myths, the mysterious landscape of Albion and the inner journey of the soul. Find out more at France and Vincent. She is owned by a small dog who also blogs. Follow her at scvincent.com and on Twitter @SCVincent. Find her books on Goodreads and follow her on Amazon worldwide to find out about new releases and offers. Email: findme@scvincent.com.
View all posts by Sue Vincent →
This entry was posted in Photography, Spirituality, The Silent Eye and tagged computer updates, creating change, habits, life lessons, mornings, PC, windows. Bookmark the permalink.

24 Responses to ‘Updating your system…’