So, this one day, considered in all its facets, resolves itself into a journey, a destination and an arrival – an arrival at a meeting with a French relative we have never met, and whose unlikely presence, here in the north-west corner of Wales, completes a cycle of mystery and loss lasting ninety-three years…

As we journey along the spine of Anglesey, to meet her by the Red Tower in the university town of Bangor, Juliette is waiting, over a coffee, in a place where she will be able to see us walking up the main street.

The car journey, fortified by all the strange connections, becomes an arrow; an arrow that completes…

On the road across the island, we talk of the wonderful good luck of finding the local guide cum historian in the church of St Patrick at Llanbadrig Head; of his smile when he had told us that, usually, he attends on only two afternoons a week, but this morning, he felt he should be there… Wonderful story teller that he is, he had walked us to the cliff edge to see the island of Middle Mouse,  to point at the dark rock and bring to life St Patrick’s escape from the storm that wrecked his ship. He had told us of the deadly cliffs, below, and that we were standing right over the cave that gave sanctuary to the swimmer on the dawn as Patrick escaped from his isolated rock and made the relative safety of the shore, with its protective cave with the freshwater spring. 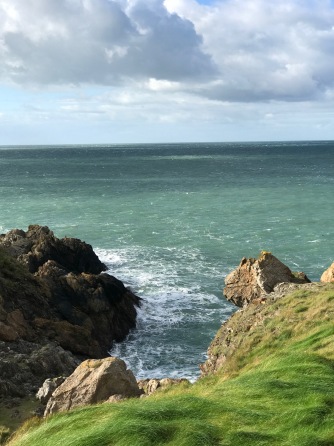 Sue Vincent is a Yorkshire-born writer and one of the Directors of The Silent Eye, a modern Mystery School. She writes alone and with Stuart France, exploring ancient myths, the mysterious landscape of Albion and the inner journey of the soul. Find out more at France and Vincent. She is owned by a small dog who also blogs. Follow her at scvincent.com and on Twitter @SCVincent. Find her books on Goodreads and follow her on Amazon worldwide to find out about new releases and offers. Email: findme@scvincent.com.
View all posts by Sue Vincent →
This entry was posted in Ancient sites, family, History, Steve Tanham and tagged Anglesey, Calais, Family Trees, Life in France between the wars, Llanbadrig, Lost family connections, St Patrick, WW1. Bookmark the permalink.