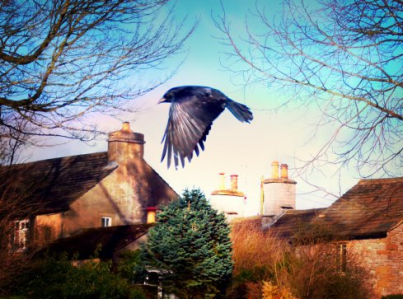 The Queen was troubled. Dressed in her shimmering silver finery, she wore a frown and furrowed brows, long fingernails tapping an impatient tattoo on the arm of her extravagant throne. Her messenger was late.

She knew that he bore important, urgent news, but his journey had taken far longer than she had expected. She feared the worst, knowing that many of her enemies lurked in the villages and woodlands on the fringes of her kingdom. If they had recognised him, they would have killed him for sure.

A squawk woke her from her reverie, and the Queen sighed deeply at the sight of her raven swooping through the grand palace doors. He alighted daintily on her crystal sceptre, ruffling his wings and cocking his head, beady black eyes fixed on the piercing blue irises of his mistress.

The raven cawed and crowed a succinct response. The Queen’s stony…

Sue Vincent is a Yorkshire-born writer and one of the Directors of The Silent Eye, a modern Mystery School. She writes alone and with Stuart France, exploring ancient myths, the mysterious landscape of Albion and the inner journey of the soul. Find out more at France and Vincent. She is owned by a small dog who also blogs. Follow her at scvincent.com and on Twitter @SCVincent. Find her books on Goodreads and follow her on Amazon worldwide to find out about new releases and offers. Email: findme@scvincent.com.
View all posts by Sue Vincent →
This entry was posted in Uncategorized. Bookmark the permalink.