I love this idea from Robbie and Michael Cheadle. When my own sons were younger, we spent many happy hours baking and creating things with sugarpaste in the kitchen…and just as many hours snuggled up with books.

The most exciting moments of my life were when my two boys were born. First came Greg, born on 24 February 2003, and then my little Michael, born on 30 January 2006. The feelings of absolute joy and amazement that I felt when my babies were first placed in my arms are indescribable. My pleasure at their births even outweighed my happiness on my wedding day and, despite the anxiety and worry caused by ill health experienced by both my children, I still completely adore them both.

I have always been a great reader and I had aspirations that both my boys would also be readers. To this end, I always read copiously to both of them and revisited all my favourite childhood authors including Enid Blyton, Edith Nesbit and Roald Dahl, to name just a few. I can remember reading The Enchanted Wood to Gregory when he was only fifteen months old. Incredibly, he sat and listed to it, a few pages at a time. I thought that I was reaping the rewards of my bookish efforts and was very pleased. Gregory has gone on to be quite an enthusiastic reader and participated, in a group of four boys from his school, in the Kids Literature Quiz that took place in New Zealand in August this year.

Michael was also introduced to books at a very young age. He was, and still is, a great listener to stories and audio books. Michael, however, is a remedial child and it was a lot more difficult teaching Michael to read and write sufficiently fluently for him to really take pleasure in these two activities. I was very determined that I would overcome anything that stood in Michael’s path to reading and writing happiness and so I started writing little stories with him. The stories were all about Sir Chocolate and Lady Sweet, both figments of Michael’s amazing imagination, who lived in Chocolate land where you can eat everything including the trees, flowers and houses.

Sir Chocolate is a wonderfully kind and clever character who has a number of adventures assisting his friends out of various situations and scrapes. Initially, Michael wrote the stories himself but as they became longer and more complex, I started rewriting them for him in rhyming verse. Although I am the scribe, and also a significant contributor to the ideas and story line, Michael still comes up with the most wonderful and interesting story and character ideas. It was Michael’s idea to write about Sir Chocolate and the fondant five animals (as opposed to the African big five animals) and he also invented the Baked Alaska dragon that breathes fire in different colours to match its mood. As we both love to bake, we also started making illustrations out of fondant and other goodies for the little books we were creating. Michael was very taken with my literary adventures and took some of our little books to school with him. The other children were all very interested in the stories and characters. My brother-in-law, who is involved in the advertising industry, saw our stories and suggested that I include some simple recipes and turn the books into children’s cookery books. This sounded like a fun idea, so I included five recipes in each book and added illustrations for the recipes as well.

Earlier this year, I took a couple of our little books, complete with pictures, to our Church to read to the Sunday school children. They really enjoyed the stories and a friend of mine from our Church suggested that I send them to Anne Samson from TSL Publications in the United Kingdom and see what she thought of them. To my great surprise, Anne liked our books and offered to publish them for us. At this point, Gregory also entered the fray and started filming and editing YouTube videos of me making the various recipes for the TSL Publications YouTube site. In August this year our first book, Sir Chocolate and the strawberry cream berries story and cookbook was published. It was well received by friends and family who loved its uniqueness and so we started planning the release of our second book, Sir Chocolate and the baby cookie monster story and cookbook in time for Christmas this year.

In late September, I handed the draft of book 2 over to TSL Publications and started thinking about starting a blog. I had been writing poetry for some time and thought it would be nice to blog some of my unpublished poetry and link up with other, like-minded people in the literary world.

Robbiesinspiration.wordpress.com was borne in mid-September and I started posting twice a week, a recipe and cake decorating post on a Sunday evening and a poem on a Thursday morning. As I started linking up with other bloggers I got new ideas about posts and started posting a children’s literature related topic on a Tuesday morning and a fondant making tutorial on a Friday morning.

I have been reading a lot of posts involving a variety of different Christmas stories so I thought it would be a nice idea to include a Sir Chocolate Christmas story in this guest post. This story is entitled Sir Chocolate and the missing Christmas harp and I have included a few illustrations that relate to the story. I hope you have as much fun reading it as we had writing it and making the illustrations.

Christmas Eve was only two nights and a day away;

When Santa popped in wearing a look of dismay;

Was it a case of no presents for a naughty child’s folly?

Sir Chocolate invited Santa indoors, out of the cold;

Over hot chocolate and cake, Santa his story told;

Each of the Christmas elves of the theft had been cleared;

It was a catastrophe; the harp’s sweet notes caused sleep;

It worked on everything – parents, children, dogs and sheep;

Santa used it to deliver the presents without been seen;

He came down the chimney and left, as if he’d never been.

Santa had come to see if Sir Chocolate’s had any ideas;

To avoid children being disappointed and shedding sad tears;

If the world was awake, Santa’s gifts couldn’t be delivered;

At the thought, Sir Chocolate felt quite shocked and shivered.

Sir Chocolate was eager to help, they set off back to the North Pole;

They travelled on the chocolate steam train that used liquorice coal;

This fuel packed a punch; they travelled at an amazing speed;

And soon arrived at the North Pole, to start looking for any lead;

There had to be something that would give a clue to the crook;

Who’d crept into Santa’s toyshop and the harp with him took;

Sir Chocolate walked around and examined every inch of the floor;

It was vital he found the harp so Santa his plans could restore;

Out of the corner of his eye, he spotted some tiny crumbs;

When he approached, he could smell gingerbread and plums;

The gingerbread wood cutter, who lived amongst the sugar cone pines;

Sir Chocolate told Santa his news and they set off at a fast trot;

On the way to the sugar cone pine forest, a plan they did plot;

They arrived just at sundown, through the trees came a beautiful sound;

Sir Chocolate and Santa stopped to listen, feeling quite spellbound;

Then, they both blocked up their ears, to fall asleep would not be good;

Until after they had found the woodcutter and his story heard and understood;

They soon found a lovely clearing, with a chocolate log cabin in the centre;

They knocked on the door and heard the woodcutter call out for them to enter;

They went in through the front door and their eyes adjusted to the gloom;

They saw the Christmas harp on a table in the middle of the room;

The woodcutter followed their looks and looked sheepish and ashamed;

He said the theft on his new neighbours, the owls, could be blamed.

“Why is it their fault?” Santa asked, a puzzled look on his round face;

“They are nocturnal!” “Every evening they hoot, hunt and race”;

The woodcutter had not slept for weeks and felt desperately tired;

Some relief from this uncomfortable situation, he urgently required.

“I have the answer!” Sir Chocolate proclaimed with a great, big smile;

The candyfloss sheep live on the forests edge, a walk of less than a mile;

They can knit the woodcutter some ear muffs to block out all the noise;

In return for the muffs, Santa could give the lambs some new toys;

The following morning, the shepherd saw a most incredible sight;

Every lamb had a toy – one was even flying a red and yellow kite;

And as for the gingerbread wood cutter, the ear muffs did the trick;

He climbed into his bed and slept solidly, just like a chocolate brick;

Santa and Sir Chocolate set off at once, to return the harp to the fairy;

She immediately hid it away, its theft had made her feel quite wary;

Everything returned to normal, the Christmas elves finished their presents;

Then they all had a lovely party to celebrate the happy outcome of events. 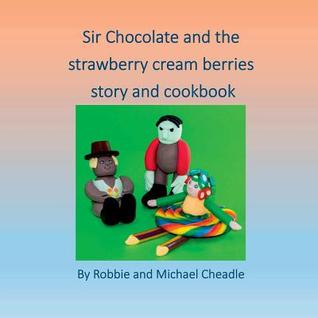 The adventures of Sir Chocolate and Lady Sweet in poetry form. Michael came up with the idea of Sir Chocolate and Lady Sweet and many of the characters contained in the books, when he was ten years old. His ideas were such fun that Robbie decided to turn them into little verse books for his entertainment. The book contains recipes for children to make with adult assistance. 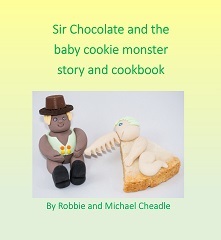 Sir Chocolate and the Baby Cookie Monster Story and Cookbook

Sir Chocolate and Lady Sweet find a lost baby cookie monster. Join them on an adventure to return the baby to its mother and learn how to make some of their delicious recipes at the same time.

You can order Sir Chocolate books from the following outlets:

Sue Vincent is a Yorkshire-born writer and one of the Directors of The Silent Eye, a modern Mystery School. She writes alone and with Stuart France, exploring ancient myths, the mysterious landscape of Albion and the inner journey of the soul. Find out more at France and Vincent. She is owned by a small dog who also blogs. Follow her at scvincent.com and on Twitter @SCVincent. Find her books on Goodreads and follow her on Amazon worldwide to find out about new releases and offers. Email: findme@scvincent.com.
View all posts by Sue Vincent →
This entry was posted in adventure, Books, Poetry and tagged baking, children's books, cooking with children, fondant, modelling, story poems, sugarcraft, sugarpaste. Bookmark the permalink.