The temptation is to slam the brakes on… but we’ve both seen it. You could, I suppose, hardly miss it… especially not after the otherworldly morning on Glastonbury Tor. This thing, coming hard on its heels as it were, makes the Tor look like a molehill.

The Tor, crowned with its tower, dominates a town steeped in legend and the iconic silhouette is magical. It is known worldwide and loved deeply by many. We had stood that morning upon its summit, buffeted by winds and looking out over a landscape alive with myth and history, knowing the stories almost instinctively through connection with this land in which we live.

But it is a hell of a climb to that summit on a day when the winds are blowing gales, making it difficult to stand upright long enough to take a steady picture and the consensus as we descended was, quite simply, “No more hills today.”

This thing, however, we’d never even heard of… and it is huge. 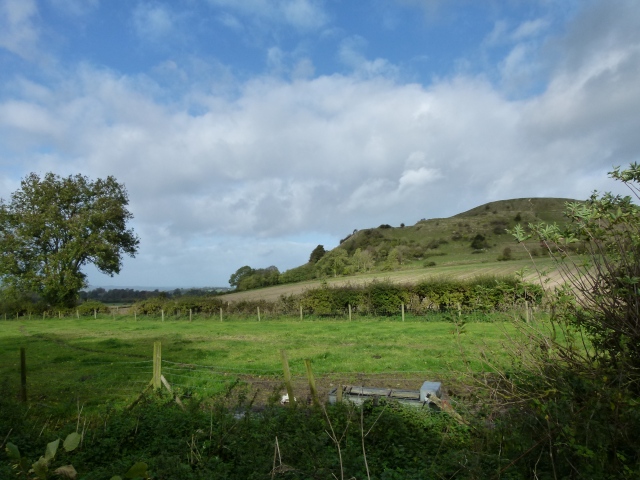 “It is undoubtedly one of ‘our’ hills…”

“The map says the road goes right next to it…”

“We’re going to have to stop if we can…”

First, however, I had to climb a wall to get a decent shot of the outline against the sky… so much for dignity…not that I’ve ever had much, but still… 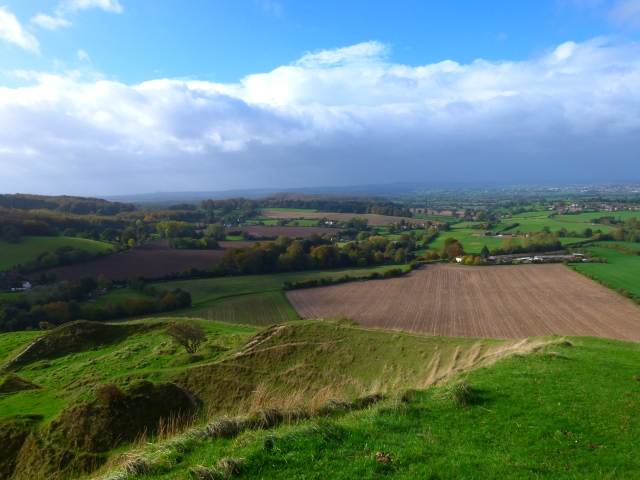 We were bubbling with excitement as I swung the car into the unexpected car-park. It doesn’t take much to keep us happy when things are afoot… and they obviously are…

In the lee of the hill it seemed even bigger… it rises from the surrounding plain stark against the sky, crowned unmistakably with bowl barrows…its sides terraced with what looks remarkably like a processional way… or the cover of a children’s book I loved as a child and had just re-read… Borrobil, by William Croft Dickinson (Puffin). 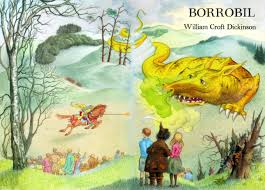 The cover art shows Morac charging the dragon, who has anchored himself by wrapping his tail around a hill. What else, may I ask, could explain those serpentine terraces… and though that was set at Beltane and this near as dammit Samhain, there was magic in the air, sparkling…

Subsequent research shows the summit to be 775ft above sea level, and as the surrounding landscape is so flat we were going to have to walk every foot of it… substantially more than the Tor. And, I recalled, we weren’t doing any more hills that day… a thought that wandered blithely across my mind about halfway up, breathless and fighting the wind….

Cresting the rise, however, it was worth it… the landscape of the hill is spectacular enough… an Iron age hillfort …

“Yeah, right… define that, would you?”

….Bronze age barrows… a satellite hill nestled close, very similar to other landscapes we have seen…

And over the barrow, a rainbow…. 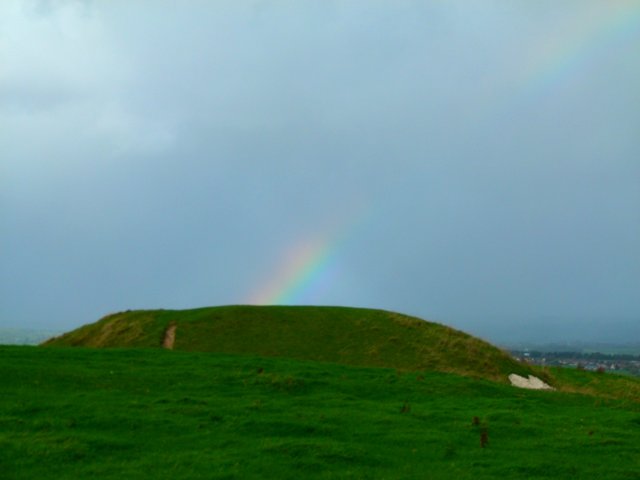 Which seemed appropriate somehow. We put so much effort into climbing the hill… a hill we had come upon unexpectedly when we had vowed ‘not again’… yet it was there and we had to climb it. Which is pretty much how life works in general. There is always a price to pay in effort for the things worth attaining. A willing sacrifice of energy in exchange for the view, as Don mentions in The Initiate…and even when the going gets really hard rainbows may wait unexpectedly at the end of the journey.

I wandered off at one point… standing on the very edge of the hill, arms raised to the sun.. it seemed the right thing to do… but more of that another time… perhaps….

Energised, exhilarated, windblown we made our way back to the car…

“Where are we heading next?”

Sue Vincent is a Yorkshire-born writer and one of the Directors of The Silent Eye, a modern Mystery School. She writes alone and with Stuart France, exploring ancient myths, the mysterious landscape of Albion and the inner journey of the soul. Find out more at France and Vincent. She is owned by a small dog who also blogs. Follow her at scvincent.com and on Twitter @SCVincent. Find her books on Goodreads and follow her on Amazon worldwide to find out about new releases and offers. Email: findme@scvincent.com.
View all posts by Sue Vincent →
This entry was posted in adventure, Ancient sites, Landscape, Photography and tagged Books, Cley Hill, Glastonbury, somerset, Stuart France and Sue Vincent. Bookmark the permalink.