The patio doors in from the garden had been open when I arrived for the first time this year. An observer would see me seated in the centre of the room while my sons, both bearded, tall, alike but yet very different are silenced by the outrageous, almost unforgivable  statement I have made. Two pairs of eyes, one brown, one blue, look at me aghast from each end of the big leather sofa, Shock, disbelief and horror written large across their faces.

“What, really?” this from his brother.

“What is the world coming to?” mutters Nick.

I chuckle at my sons’ disgruntled expressions. Nick presses play and ‘Envy the Drumstep’ , Nick’s latest creation, fills the room with far better quality sound than I have heard so far. They watch, with appalled fascination as I tap my foot to the beat. Nick pinches himself to make sure he’s awake. Alex hides his head in his hands.

“That completely ruins it, you know,” says Alex, his face a picture of doom and gloom. I hush them with a raised hand so I can listen to my favourite bit and their faces sink further into horrified surprise. There is a certain piquant pleasure, I admit…akin to the first time I sang along to one of their ‘tunes’.

“Yep.” Says Nick, the image of desperation and gloom. “The tiny nerkist Hobwok likes it.” (Yes, dear friends who commented about the Goon Show and Ewoks. They saw. At least they didn’t call me Bluebottle. Yet.)

A stranger observing this exchange might miss the twinkle in three pairs of eyes. They might even be forgiven for imagining a scene of mental torture being inflicted upon my sons by their undersized mother. But in fact nothing could be further from the truth. In these melodramatic exchanges and vague insults there is only laughter. Lots of laughter. 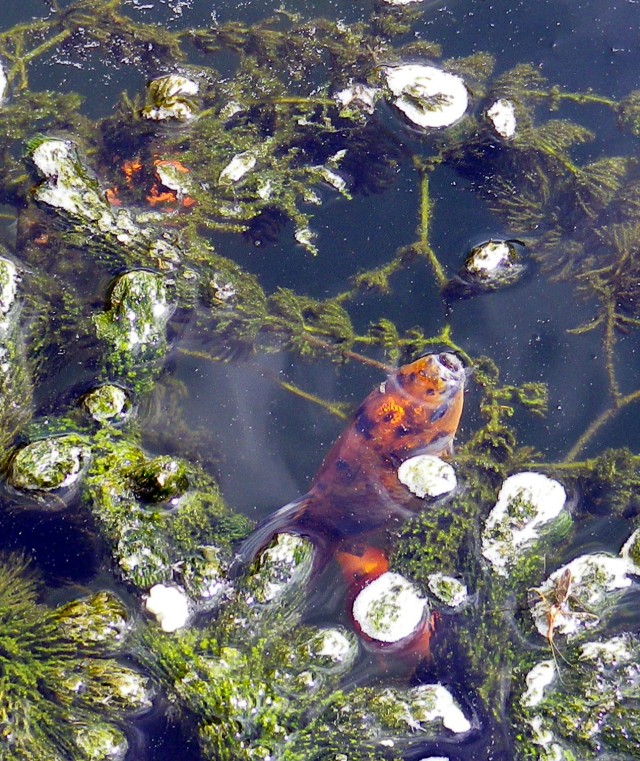 We moved outside, to the pond, where a dead fish needed removing, frogs needed to be counted and a caterpillar rescued from probable drowning. This took a while as there was a long debate about the possibility of the small green creature being a pond caterpillar, of some hitherto undiscovered aquatic variety. In spite of legs and the absence of gills, of course. It became quite philosophical.

However, we eventually agreed upon rescue and Alex duly netted the caterpillar from the weeds. It was a shame he left it on the net, of course, rather than depositing it on some random bit of terrestrial greenery as I promptly nearly drowned the poor thing again, clearing leaves from the waterfall. The fortune that protects small creatures from idiots stepped in and the caterpillar crawled away as fast as it could to safety, without a backward glance.

Varied discussions ensued, the musical heights, and I use the term loosely, to which Nick has taken a piece of my poetry examined and chuckled over, the upcoming launch discussed and an official visitor alert issued. Just so they remember.

Not, that is, that Nick will forget one particular visitor’s imminent arrival. He pointed out that at least one of this gentleman’s paintings was not Mum-friendly. He will not be happy when he sees a print of it soon to be hanging on my wall… In fact, he mentioned the impossibility of ever setting foot in my home again.

It brings to mind a small contretemps I had with my son when I publicly requested life models for a group of three nudes I needed to paint. Not that I got any volunteers, mind you, but he would have expired of apoplexy had he seen the living room strewn with photographs of naked ladies for days on end…

ButI digress. It is not unusual.

The sun was shining, there were midges above the pond and even the goldfish were stirring. The sturgeon were active and I will draw a discrete veil over the activity of the frogs. This too being non-Mum-friendly. Although it is very cold there is a distinct hint of warmth in direct sunlight. It may even be the first glimmerings of spring.

I blame this of course for my next aberration.

“No need for that!” were the horrified and simultaneous exclamations that greeted my remark, shocked faces peering down at me from their lofty heights.

I apologised at once, of course. Profusely. I honestly don’t know what came over me.

You see, I had told them, all unthinking, that I love them.

Sue Vincent is a Yorkshire-born writer and one of the Directors of The Silent Eye, a modern Mystery School. She writes alone and with Stuart France, exploring ancient myths, the mysterious landscape of Albion and the inner journey of the soul. Find out more at France and Vincent. She is owned by a small dog who also blogs. Follow her at scvincent.com and on Twitter @SCVincent. Find her books on Goodreads and follow her on Amazon worldwide to find out about new releases and offers. Email: findme@scvincent.com.
View all posts by Sue Vincent →
This entry was posted in Life, Love and Laughter, Photography and tagged being, Life, love, motherhood, Nick Verron, relationships. Bookmark the permalink.

21 Responses to A hobbit’s revenge