Did you read bedtime stories to your children when they were little? It was a magical time – and not just because it was the precursor to getting some peace and quiet for a few hours! No, there were opportunities to practice your acting skills, rediscover stories from your own childhood, and bond with your children in a shared experience. (Of course, it doesn’t last! Even before they reach their teens, they turn into ‘Kevins’ and, overnight, you become the anti-Christ – or they do, I’m never sure who needs the Exorcist in this scenario.)

Some of us, of course, get a bit too big for our boots. We decide Beatrix Potter, AA Milne, Enid Blyton et al can only go so far. What our kids really need is a tale they can connect to more deeply. And only one person has the ability to come up with that tale. The person they love more than anyone else in the world. No, I’m not talking about Barney the Dinosaur – which probably tells you how old my kids are now.

And what better way to engage those children than to tell them a story about characters they’re already familiar with. Like their cats.

In fairness, I didn’t tell them a tale about the cats, as such. I came up with a group of friends who happened to have the same names as the cats. So we had Mush, Beeble, Tipsy and Nicky, and these were the Three Musketeers (I know – I can’t count!) to a ‘D’Artagnan’ I created called Salin. Five friends who set off on a quest to find or retrieve (I can’t remember which) something (I can remember what, but it’d be a spoiler), and the adventures they had along the way (no, I can’t remember what they were). I don’t even think I got these friends to their destination, because the children lost interest, or I did.

It’s hardly an auspicious start to what would eventually turn out to be the longest writing project I’ve ever embarked on. By that, I don’t mean the book is excessively long – although it has been at times – but it has taken me around 15 years from deciding it was worth exploring as a potential novel, to actually going to print with it.

There have been a lot of changes in between. Although the first draft retained the cats’ names, it soon became clear they didn’t work for the story. They might have had some sentimental value – we all loved those cats – but sentiment won’t sell books. So they evolved and gained new names.

When I finally felt I had a draft I could send to an editor, I was told to lose one of the friends because he added little to the story and took up too much space. Which was a shame, because Nicky (or whatever I’d changed his name to) had been my cat since I was twenty. Again, sentiment doesn’t sell books.

From the same edit, I learnt there was too much focus on the good guys, and the bad guy needed more depth. Sadly, he didn’t also need a cat. More than that, though, it was felt the tone wasn’t dark enough. I did still want my kids to be able to read it. But, at the rate things were going, they were already edging into adulthood, so maybe it didn’t need toning down so much.

It took a few further drafts to get it right, but I am confident I have now. Even if I don’t sell millions of copies (and I have a feeling I won’t), it is a story I’m proud of, it’s the one I want people to read. The editor was right. There is no room for sentimentality in these things.

Nevertheless, I know where it started. Which is why Carrion is dedicated to my children – and the cats.

Cordane, Willow and Vangor had thrown themselves to the ground. As they began to sit up, Cordane looked across at Salin.

“All right, now I’m convinced about the sword!” he shouted.

“It wasn’t the sword!” Salin called back as he ran towards them.

“Well if it wasn’t the sword,” Willow demanded as she climbed to her feet, “what was it?!”

Salin had reached them now and was helping Vangor up, his head twisting and turning. “There!” he yelled.

And suddenly the troll didn’t seem very scary at all. 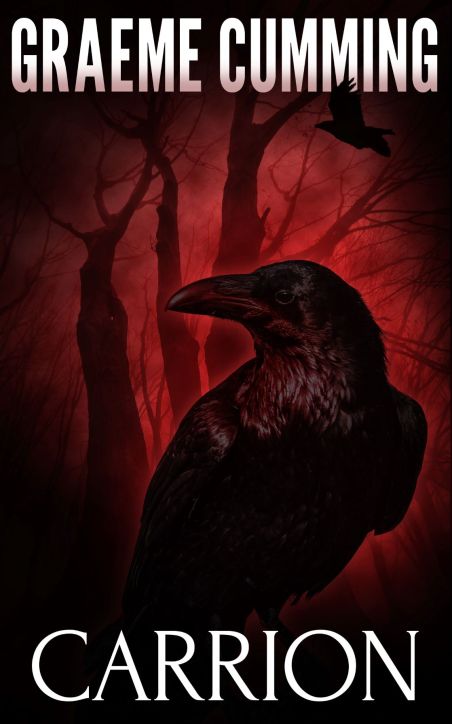 A sheet of black filled his vision as hundreds of birds dived at the cottage, pointed beaks thrust forward. From this angle, he couldn’t see many of them striking it, but the few he did see held nothing back as they hammered into the shutter. The scale of the attack was beyond anything he’d seen or heard of. And bloodied casualties littered the ground: skulls shattered, wings broken, innards spilling from them. The fact that so many of them continued with the onslaught in spite of this filled him with even more dread.

Salin has always wanted an adventure and, when the opportunity presents itself, he grabs it with both hands, taking his friends along for the ride – whether they want to or not.

With strange lands come strange creatures that stand between them and their goal.

And that goal is the same for someone else, a man who believes the prize is worth every sacrifice – especially when the sacrifices are made by others.

The future is about to change. But who for?

Buy Carrion at Amazon.co.uk and Amazon.com

When not writing, Graeme is an enthusiastic sailor (and, by default, swimmer), and enjoys off-road cycling and walking.  He is currently Education Director at Sheffield Speakers Club.  Oh yes, and he reads (a lot) and loves the cinema. 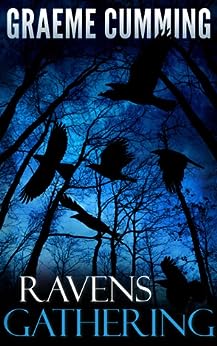 As she let her gaze drift around her, she saw that there were more birds. Perhaps a dozen or so, perched among the trees that stood on the edge of the clearing. And yet more were arriving, swooping down through the gap overhead and landing on branches that overlooked them. The birds weren’t threatening, yet the sight of them all coming together in this dark and isolated spot was unnerving. Tanya reached a hand out towards Martin, and was relieved to feel him take it. She felt him move in behind her. After the uncertainty she’d experienced with him in a similar position only a few moments ago, she recognised the irony of her reaction. His closeness offered security.
“You know what they are, don’t you?”

A stranger’s arrival in a small village coincides with a tragic accident. For the Gates family in particular it’s more than a coincidence, but unease increases following a brutal attack. As tensions rise, a dark past returns to haunt them and others, while newcomers to the village are drawn into a mystery with terrifying consequences.

And only a select few know why the ravens are gathering…

Sue Vincent is a Yorkshire-born writer and one of the Directors of The Silent Eye, a modern Mystery School. She writes alone and with Stuart France, exploring ancient myths, the mysterious landscape of Albion and the inner journey of the soul. Find out more at France and Vincent. She is owned by a small dog who also blogs. Follow her at scvincent.com and on Twitter @SCVincent. Find her books on Goodreads and follow her on Amazon worldwide to find out about new releases and offers. Email: findme@scvincent.com.
View all posts by Sue Vincent →
This entry was posted in Guest post and tagged action, adventure, bedtime reading, fantasy, fiction, new book, thriller. Bookmark the permalink.