Following the story begun in ‘The Light and the Eye of the Cobra’, the scene is set for the Silent Eye Workshop 2015 – River of the Sun.
http://thesilenteye.co.uk/2014/11/19/the-light-and-the-eye-of-the-cobra/ 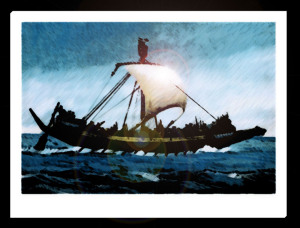 Darkness had just fallen when the Dark Apep rounded the curve in the river and fixed its course on the stone landing of the Island of Philae. The ranks of the Obion Guard relaxed their stroke, feathering their oars as one. Menascare, the most trusted friend and arch mage of the Pharaoh elect, strode from the raised command point at the rear of the craft and stood with him in the prow, looking at the lights of torches which ringed the fringes of the temple island.

“No,” said the Pharaoh elect, “they could not know of our arrival. We travel in darkness for a reason . . .”

“Then why their lights?”

“I think we join them at a fortuitous time.”

“A ritual in progress?”

The younger man put the wooden…

Sue Vincent is a Yorkshire-born writer and one of the Directors of The Silent Eye, a modern Mystery School. She writes alone and with Stuart France, exploring ancient myths, the mysterious landscape of Albion and the inner journey of the soul. Find out more at France and Vincent. She is owned by a small dog who also blogs. Follow her at scvincent.com and on Twitter @SCVincent. Find her books on Goodreads and follow her on Amazon worldwide to find out about new releases and offers. Email: findme@scvincent.com.
View all posts by Sue Vincent →
This entry was posted in Uncategorized. Bookmark the permalink.