I did the unthinkable yesterday… I downed tools and took the evening off. Well, half the afternoon and the evening to be exact. What did I do with such unaccustomed luxury, you may ask? Something excitingly unusual? Something surprisingly novel? Yes!

I know. Dereliction of duty. Desertion.

Not only did I do nothing, I did it on the sofa with my dog. For hours.

I’ve been tired lately. Not just your ‘get a couple more hours sleep’ tired, but sort of weary , exhausted tired. By ten past three yesterday afternoon the urge to sleep was overwhelming. I had a coffee, did some housework and tried again… still sleepy. So just for once I threw in the metaphorical towel, snuggled up with Ani and had a siesta.

She couldn’t believe her luck… mid afternoon snuggles? On the rare occasions where we just curl up together, Ani likes to lie across the sofa back with her nose in my shoulder and one paw touching… possibly to make sure I don’t escape. Who knows how long that would have lasted, but she also likes to keep watch on the street, guarding my slumber… and alerting me to passing dogs by using me as a launchpad to reach the window in double quick time.

Duly woken I fed and walked her while a baked potato did its stuff in the oven. Rather than eating at the keyboard, I answered messages then we curled up again on the sofa, this time with dinner and a film. Eating on the sofa is interesting as Ani still adopts her preferred perch on the sofa back, but at such times her head is on my shoulder, her nose inches from any morsel that attempts to make its way from plate to mouth, with the occasional dribble of drool trickling down my neck; my half of the tin of tuna apparently proving irresistible. 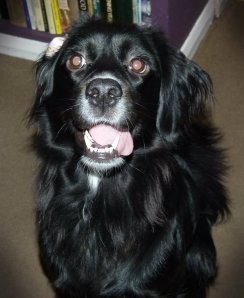 Okay, I couldn’t resist checking messages when I took the plate to the kitchen… answered a couple… then resumed my evening of indulgence. In a spirit of decadent excess, when the film had finished, I watched another.

Oddly enough, my mind was buzzing with ideas… none inspired by the films which were deliberately lightweight. Okay, children’s films, let’s be honest here. A quick catch up on the emails, then I took a book to bed and managed half a page before I was asleep.

The computer, sulking perhaps for my desertion and lack of attention, refused to start this morning at five when I gave up and got up. Since then getting into my email account has been hit and miss, attended by a series of error messages. I left it to sort itself out while I walked a black dog in the darkness, then back to get ready for work.

Do I feel less tired today? No. I have a fair bit of catching up to do too. Do I care? No. I may even do it again… Sometimes you just need to take time out and few things beat snuggling up with an ecstatic small dog.

Sue Vincent is a Yorkshire-born writer and one of the Directors of The Silent Eye, a modern Mystery School. She writes alone and with Stuart France, exploring ancient myths, the mysterious landscape of Albion and the inner journey of the soul. Find out more at France and Vincent. She is owned by a small dog who also blogs. Follow her at scvincent.com and on Twitter @SCVincent. Find her books on Goodreads and follow her on Amazon worldwide to find out about new releases and offers. Email: findme@scvincent.com.
View all posts by Sue Vincent →
This entry was posted in Dogs and tagged Ani, Dogs, pets, time out. Bookmark the permalink.

58 Responses to Time out