For most guest authors, I let the author’s bio speak for itself. However, author Ken Decroo says little in his official bio about the ‘life worth writing about’ that he has led. This is a man I would love to sit down and talk with. I first came across him when I was researching the  Washoe Project, teaching American Sign Language to chimpanzees. In a recent television interview (available HERE for many readers, but currently unavailable in Europe), he speaks of his encounter with a playful primate. You can also read the story on his blog.

Ken later went on to become an animal trainer and technical advisor in Hollywood, working with Harrison Ford in “Raiders of the Lost Ark” and in Brazil, training the jaguars in John Boorman’s “The Emerald Forest”. He has appeared on many talk shows, including “Late Night with David Letterman.” and received the coveted PATSY Award, given by the American Humane Society for his work as a trainer on the Television Series, “Simon and Simon.” His work with primates forms the foundation of his novels, ‘”Almost Human” and “Becoming Human”,  with the third book, “More than Human” due for publication later this year.

In spite of his expertise, however, it was sometimes the animals who had the last laugh…

Many years ago, back in the early 80’s, I worked on a movie with Clint Eastwood called, “Any Which Way You Can.” We filmed on location in Jackson Hole, Wyoming. I was an animal trainer on the show working with an orangutan named Clyde. Yes, for those of a certain age, the famous Clyde.

Clyde was a full grown adult and you had to be very alert when working him as he could ruin your whole day. A full grown orang weighs several hundred pounds and is extremely strong especially in his upper body. While a bite from one can be serious, the real danger comes from the power of their arms. In the forest they use their arms and upper body to swing through the trees. The technical term for this is brachiation. Needless-to-say, their arms have evolved to be very strong. They have been known to pull a man’s arm off his body.

To make matters even more challenging, they are not a very social animal. Hence, they do not have all the gestures and vocalizations of a more social animal like the Chimpanzee. As we say in the business, they are very had to “read.” The aggressive cues of an orangutan are very subtle. You can find yourself in the fight of your life without much warning at all.

Because of their power, strength and intelligence, a trainer is very careful to not let the orangutan know how much stronger they are. In fact, when they are young and cute, there is the temptation to wrestle and play physically with them but in doing so the orang can learn how weak and slow we humans actually are in comparison. So, we are very careful in our play and physical contact when rearing them.

Now, this posed a problem for the movie. The script called for Clyde to hit someone on several different occasions. In fact, the “money’ shot of the movie was at the end were Clint Eastwood says, “Right turn, Clyde” and Clyde knocks out a CHP moto cop.  We worked diligently to get Clyde to make this aggressive move. Clyde was clearly confused at first. But, after some time, he would hit on the cue of “Right turn” with great effect. We had changed the rules of our relationship.

I have always said that a trainer must be smarter than the animal he is training. And with Great Apes, that can be very difficult. Clyde was smart and on at least one occasion smarter than me.

We had just finished a scene and had wrapped for the day. We were headed back to Jackson Hole and our condo. Clyde was sitting between me and a driver and we were lost. The driver and I were disagreeing as to which road we should take.

After several wrong turns, I finally said in frustration, “We need to make a ‘right turn’ at the stop.” Upon hearing his cue, Clyde hit me so hard he almost knocked me out. I saw stars for a second. I was so angry I turn to hit him back. But paused when I realized that it cost $80,000 a day to shoot a feature and we had spent the last two months training him to do the very thing I was going to punish him for. We stared at each other for several heart beats before I relented and exhale loudly. I could not punish him. He had won this time.

As though knowing my predicament, he opened his mouth in a full grin and panted a loud and horse laugh, “ha, ha, ha.”

As I said, you have to be smarter than the animal you are training.

Kenneth L. Decroo truly believes you must live a life worth writing about. Before he became an educator and consultant for universities and school districts, he worked in the world of research and wild animal training in the motion picture industry for many years. He holds advanced degrees in anthropology, instructional technology and education. He lives and writes in the San Bernardino mountains with his wife, Tammy. When not writing and lecturing, he loves to ride his BMW adventure motorcycle down the Baja peninsula to beaches and bays without names.

Available via Amazon UK, Amazon.com, Barnes and Noble and other booksellers. 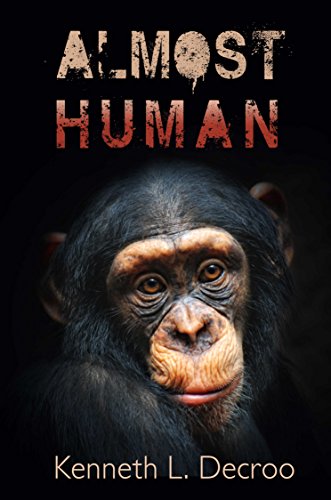 When Dr. Ken Turner and his colleagues decide to search for rumored half-human, half-chimpanzee creatures, he gets more than he bargained for. Now, with time running out, he must risk his career and life to find and protect these creatures before a group of shady underworld agents find them.

When Dr. Ken Turner and his colleagues finally find half-human, half-chimpanzee hybrids in the dark jungles of the Congo, they think they are at the end of their long quest, but shady government agents have discovered the hybrids and plan to exploit them for military use. With the ruthless agents growing ever closer to realizing their goals, Dr. Turner and company must find a way to protect the creatures without destroying their careers and, for that matter, their very lives.

Sue Vincent is a Yorkshire-born writer and one of the Directors of The Silent Eye, a modern Mystery School. She writes alone and with Stuart France, exploring ancient myths, the mysterious landscape of Albion and the inner journey of the soul. Find out more at France and Vincent. She is owned by a small dog who also blogs. Follow her at scvincent.com and on Twitter @SCVincent. Find her books on Goodreads and follow her on Amazon worldwide to find out about new releases and offers. Email: findme@scvincent.com.
View all posts by Sue Vincent →
This entry was posted in Books and tagged animal trainer, ASL, Clint Eastwood, Clyde, Harrison Ford, Hollywood, humour, John Boorman, orang utang, thriller, Washoeproject. Bookmark the permalink.