A dire warning from Tallis Steelyard

The inimitable Tallis Steelyard introduces a new volume of The Port Naain Intelligencer… a tortuous tale of passion, intrigue and murder on the streets of his city in which he and Benor became embroiled.

In Port Naain, Jim Webster has created a detailed and lively world and an even livelier underworld, seen largely through the eyes of those who walk between the two… Benor Dorfinngil, roofrunner and cartographer, and Tallis Steelyard, poet.

It is difficult to call Jim’s books fantasy as their landscape draws you immediately into its reality. They are not ‘humour’…though they are amusing, largely through the characterisation of the players and the author’s dry wit. Nor do they slot neatly into any other genre, but blur the borders between. Which is probably why I enjoy them so much.

In this tale, Benor encounters a young bride who falls at his feet. Her husband is missing and it falls to Benor, with Tallis and his redoubtable wife Sheena the Mud-jobber, to solve the mystery of the missing bridegroom. It is Sheena the young bride is seeking… she is, amongst other things, a collector of corpses.

Jim’s use of language and detailed observation of the workings of the… frailer side of humanity are a delight. Port Naain, its environs and its inhabitants, though, are the real stars of these books. A superbly crafted world, described with the casual touch of someone whose imagination walks their streets. If you haven’t read them yet… do. You won’t be disappointed.

Now I suppose I ought to confess that I’ve been banned from doing book reviews. I suppose it was inevitable really, at least after the sad incident with Selpan Tillop and the prayer wheel. (Although in my own defence I could point out that my review was indeed remarkably mild, given I’d wasted fifteen minutes of my life trying to read the book! That’s fifteen minutes I’ll never get back.)

But still, back to the main point of my comments. It appears that the next unseemly catalogue of young Benor’s exploits is to be published. Doubtless deep in his cups he has been coaxed or cozened into gossiping.

Still I have read the story. I cannot say I entirely approve. It goes on for page after page of prose, enlivened only by one small piece of verse, and even that is something I extemporised on the spot. On the other hand I suppose I should be modestly pleased that my words struck home and were remembered accurately after so many years.

But what I’d really like to point out is that this Webster chap who writes this stuff misses out so much. Where is the mention of the Anaphora controversy which racked the poetaster community during the period this story was set?

Similarly there was a bitter argument about Consonance and its place in modern poetry. I remember it well because it was my cynical use of enjambement to highlight the facile nature of the opposition that won the day.

And yet I suppose one must accept that not everybody remembers these days when the glory of Port Naain was its nest of young poets. Now you could search the city from one end to another and not find anyone who even understands the concept of Metaphysical conceit. We live in sad times and at least this story casts a light on the days of our greatness.

So, on mature consideration, I, Tallis Steelyard, recommend that you immediately purchase a copy of ‘Woman in Love.’ 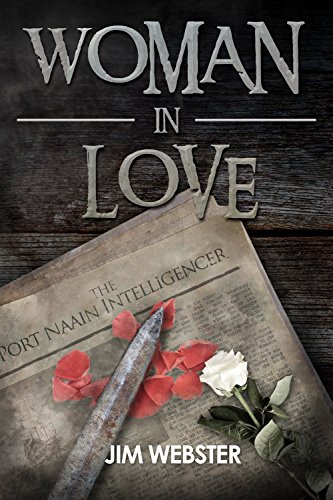 and HERE for Amazon UK

It’s always nice when I do occasionally get a chance to get a word in. A little bit about myself? I’m a farmer, writer, freelance journalist, live in South Cumbria and have a wife and three daughters.

Some time ago I took Benor, who was the hero of two of my fantasy novels, and wrote six novellas about his exploits. Each is a stand along ‘detective’ story, and they can be read in any order, they’re a collection rather than a series.

So far people seem to have enjoyed them and the fourth one is out on the first of July.

A flavour of the story (and just for Tallis, a little poetry of sorts):

Tallis commented, “Bald as an egg? There used to be a fashion amongst young men about town for shaving your head entirely. About ten years back. Some people got their heads tattooed as well but I thought it had faded away.” He smiled and then declaimed quietly;

“As bald as an egg

Both his suit and his mistress were brash

Some would not quail

To tell you his tale

But I’m a poet, not a sweeper of trash.”

Benor stood up, “A friend of yours?”

Benor was intrigued, “A fellow artist then?”

Tallis shook his head. “Alas no, he was a librettist, a composer of romantic ballads whose words are sung by drunken stevedores to their lady loves. Purveyors of sheet music fawn upon him and compete to shower him with gold.”

Benor nodded, he was beginning to understand the ways of the literary fraternity.

Sue Vincent is a Yorkshire-born writer and one of the Directors of The Silent Eye, a modern Mystery School. She writes alone and with Stuart France, exploring ancient myths, the mysterious landscape of Albion and the inner journey of the soul. Find out more at France and Vincent. She is owned by a small dog who also blogs. Follow her at scvincent.com and on Twitter @SCVincent. Find her books on Goodreads and follow her on Amazon worldwide to find out about new releases and offers. Email: findme@scvincent.com.
View all posts by Sue Vincent →
This entry was posted in adventure, Books, fantasy, fiction, Guest post, Humour, imagination, Love and tagged Amazon Kindle, ebook, Jim Webster, new release, novella, Port Naain. Bookmark the permalink.

2 Responses to A dire warning from Tallis Steelyard