There is a new blogger in town. So far, only his ‘About’ page is up, but that, I think, will be the start of something special. He has a story to tell and a journey to share.

The blogger in question has just begun a new role… a new chapter in his story, as an ambassador for the Royal Buckinghamshire Hospital. The blogger is also my son.

I have been at him for a while to write, but the problems that poses are big ones. And he wasn’t ready. And anyway, I’m only his mum. But I have written a lot about Nick. Many who follow this blog will know how he was attacked in 2009 and left for dead in a Bournemouth alley, stabbed through the brain. That he is with us still, given the extent of his injuries, is a miracle as well as a testament to the care he was given at the Wessex and the advances in medicine over the past few years. That he is with us as himself is a testament to the sheer bloody minded determination with which Nick attacked every aspect of his recovery.

To say I am proud of him is an understatement. I am proud of both he and his younger brother, who faced those terrifying weeks of coma with so much grief, yet always with a smile when he stood at Nicks bedside.

The past six and a half years have been a journey we have all shared. We have learned, different lessons in different ways and known every emotion from flagrantly irresponsible hope to the uttermost depths of fear and despair. It has not been an easy road. 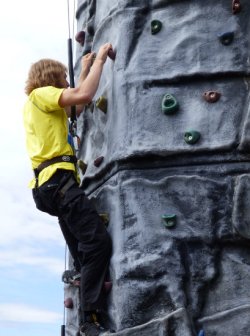 During these years I have watched Nick struggle to regain control from paralysis, deal with the reduction and damage to his eyesight, master the art of speaking again and attack every failure of a recalcitrant body and fractured memory with a focus that cut deeper than any knife.

I have shared some of his triumphs, bouncing with excitement as my fingers tapped out the words, unable to contain a joy I could share in no other way. I have told of those early days, sharing journals written at the time, trying to give a sense of perspective to why I dance like a demented hobbit sometimes… like the day he completed the Para-Tri triathlon or when he and his brother jumped out of a plane. Or the magical morning of May-Day when it really did seem that anything was possible after all.

I was not there when he arrived in Brighton, having cycled there from London. He needed to do it alone. I will not be there next week when he stands up and speaks in public at a conference for the first time since the attack. There is a time in every parent’s life when we have to step back and let our children fly without a parental safety net. With Nick, I get a second chance to do so that was never expected and should never have been possible.

Get Nick talking about his vision for what is possible and how it can be achieved and you are caught up in his passion. He is eloquent and speaks with the inside knowledge of one who has ‘been there’, because he is still there. He will talk of the things that can be done… and of how we didn’t know what was available because the gaps in our experience didn’t allow us to know what questions we should ask and where. He’ll tell of how we improvised and responded to his particular needs… and later found that the gadgetry we improvised already existed as a product we could have used had we known. He’ll tell most of all of how hope is often extinguished by the practical need to have patients accept their limitations for safety’s sake, rather than encouraging the exploration of possibilities to see where you can go. Get him talking and he doesn’t stop. Which is how he has trained his voice recognition software so quickly. 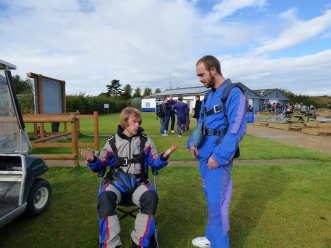 Nick’s passion came to the notice of the Royal Buckinghamshire Hospital when he started working with them as a private patient. It was Heather and Eva, his physios from the hospital, who competed with him in the triathlon. The Royal Bucks specialise in neuro-rehab and use every innovation they can find combined with a staff attitude that does not give up on individuals just because statistically their recovery is deemed unrealistic. Like my son, they have a passion for technology and how it can be harnessed to make life worth living. Now Nick is beginning a new role under their aegis, promoting a priceless commodity – hope.

Many of you have followed his journey so far… very many of you have given your support in ways that are both tangible and priceless also. His story has been a source of inspiration to many…including me. There have been hundreds of comments about him and messages for me to relay… now you can tell him yourself.

There are no posts on his blog…yet. There soon will be. For now there is just the ‘About’ page… but that says enough for starters. In his own words. I hope you will go over there and read what he has to say. And press that follow button.

You can find him at nickverron.com

Sue Vincent is a Yorkshire-born writer and one of the Directors of The Silent Eye, a modern Mystery School. She writes alone and with Stuart France, exploring ancient myths, the mysterious landscape of Albion and the inner journey of the soul. Find out more at France and Vincent. She is owned by a small dog who also blogs. Follow her at scvincent.com and on Twitter @SCVincent. Find her books on Goodreads and follow her on Amazon worldwide to find out about new releases and offers. Email: findme@scvincent.com.
View all posts by Sue Vincent →
This entry was posted in Blogging, Nick Verron, Photography, Physiotherapy, Relationships, Surviving brain injury and tagged ABI, disability, Nick, Royal Bucks Hospital, tbi. Bookmark the permalink.