Something in the air? And three books by Alan Richardson

It was a surprise, said author Alan Richardson, to see her pop up on my Facebook page. He had just released a book about her… and we had just spent a weekend delving into the story of Gilgamesh, a ruler of the ancient culture that had carved the iconic image.

I felt I had to read the book, not just because Alan’s work is always an enjoyable read, but as one of the most respected and irreverent esoteric writers, there was bound to be a breadcrumb trail to follow.

The Moonchild is a curious book, telling the story of a little girl, born in 1966 and eventually placed in a children’s home. As she grows, her true nature is revealed, while she is cared for by ‘Granny’ and her friends in the peaceful, West Country valley. But, just as Lilith is no ordinary child, neither Granny nor her friends are quite what they seem…

It is not a book to be read in one sitting… at least, not every time. To begin with, the story carries you as you try to penetrate the veil of mystery that surrounds Lilith, never quite sure where the story will lead. A second read sees you carried by something else entirely. Parts of the book seem to ‘work’ like a guided meditation as you follow Lilith out amongst the stars… and where she takes you may depend upon what you carry with you.

But The Moonchild was the second book Alan had released recently that coincided with our own adventures. We had, for years, doggedly refused to go down the Templar path. It had, we decided, been done to death, thanks to its inclusion in popular fiction. But the Knights kept cropping up on our adventures and, after writing about their presence in Somerset and our visit to Templecombe, I had a message from a friend.

“Have you seen Alan’s latest? Bit of a coincidence… ” I clicked the link she sent… and ordered his new book, The Templar Door.

Not a dry and scholarly tome… it is the author’s experiential exploration of a breadcrumb trail that takes him down a good many, seemingly unconnected, pathways in a manner that we recognise all too well from our own adventures in the landscape…

Two such coincidences would have been ‘just’ coincidence. But when Alan’s latest book comes out, The Sea Priest: Inner voyages to Light, hard on the heels of our own trip to the Western isles and not long before we plan to return there… because, brief though our stay there was, the life in the land, the light and the rainbow seas have captured us and are drawing us back… And then there is the ‘coincidence’ that all Stuart’s posts recently on France & Vincent have used the moon as an illustration… echoing the cover of Alan’s new book…

I bought the book. 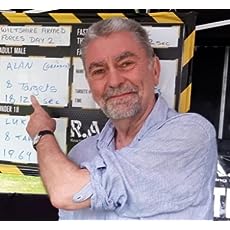 Alan Richardson has been writing weird, wonderful, winsome and frequently embarrassing books for longer than many of his readers have been alive. He has done biographies of such luminaries as Dion Fortune, Aleister Crowley, Christine Hartley, William G. Gray and his own grandfather George M. Richardson, M.M. & Bar. Plus novels and novellas that are all set in his local area weith accompanying scripts. He has a deep interest in Earth Mysteries, Mythology, Paganism, Celtic lore, Ancient Egypt, jet fighters, army tanks, Wiltshire tea shops, Great British Actors and Newcastle United Football Club. He does not belong to any group or society and does not take pupils because most of the time he hasn’t a clue what is going on.

Find these, and all Alan Richardson’s books on his Amazon Author Page

In the beginning, I planned to sail this book toward Brittany and track down Morgana le Fay, even peering through her witch-mists to the peculiar heart of Atlantis, where I thought she might be lurking. I was determined to summon, stir and call her up. In the event, at the very start of my literary voyage I was boarded by a very real Celtic Christian named Moluag, and was driven by strange inner currents toward an island in the Hebrides that wouldn’t let me go. The original title of this book was to be Raasay – an Inner Route to Everywhere. Somehow, I touched on that island as a living entity rather than just the barren lump of rock and soil, as I had assumed it was. Raasay and Moluag, with the unlikely help of William Wordsworth, have taught me that we can all make voyages that are tied in with the fertile magick of the Earth, its Seas, and our own daily experience. It was written as I went along, never seeing beyond the horizon as to what the next paragraph would reveal. As such it’s more a casual journal and an inner travelogue than an attempt at a text-book. It also includes FPD’s superb manual of self-initiation into the Faery Realms that was written in the late 1930s when the old mage was at the height of his considerable powers and was Dion Fortune’s very own Moon Priest. The Sea Priest, I hope, offers help in navigating your own inner voyages. It is as much a set of simple inner techniques that we can ALL adapt and make use of, as it is about a historical person and geographical destination.

There is a deep esoteric tradition that the next Christ will be female. But what if She was already here, influencing and changing the world without anyone knowing? What if She has already transmitted Her ancient gnosis into you, without you realising?The Moonchild is set in a hidden (but very real) valley in the West of England and details the birth and upbringing of a little girl called Lilith, born in 1966, who has to learn to be an Earthchild first before she can begin her secret mission as the legendary Lady Babalon. Along with On Winsley Hill and du Lac, I’ve used a certain rhythm in my prose to try and trigger things off on differing levels of the readers’ minds and I hope this will be the case here. At very least I hope to have made use of the Annunaki in a whimsically provocative way that might get your pulses racing.

I am not chasing the Holy Grail, the sacred Head known as Baphomet, the Ark of the Covenant or anything to do with Sacred Bloodlines. I simply want to know why the Templars of Wiltshire seem to have haunted me for some years. I will take the reader on what I hope is an unusual and rumbustious journey as I try to commune with and ultimately release these revenants from my psyche. Necessarily, I will be talking about: crop circles, spirit paths, telesmic interfaces, poltergeists, High Teas, plasma energies, hand bags, ley lines, bull-roarers, picnics and Close Encounters of the Fifth Kind (including, bizarrely, my encounter with an alien in a shopping centre); past lives, parallel lives, Spirit of Place, pseudo-Cathars, faux-Templars, group souls and Higher Beings (whom I don’t trust much) and of course buggery and humbuggery among the Templars themselves. This is not a scholarly tome, but I hope that there are enough yarns, tricks and techniques within it that might open the readers’ eyes – all three of them – and leave them feeling they’ve had an enjoyable jaunt alongside me.

Sue Vincent is a Yorkshire-born writer and one of the Directors of The Silent Eye, a modern Mystery School. She writes alone and with Stuart France, exploring ancient myths, the mysterious landscape of Albion and the inner journey of the soul. Find out more at France and Vincent. She is owned by a small dog who also blogs. Follow her at scvincent.com and on Twitter @SCVincent. Find her books on Goodreads and follow her on Amazon worldwide to find out about new releases and offers. Email: findme@scvincent.com.
View all posts by Sue Vincent →
This entry was posted in Books and tagged esoteric, Gilgamesh, Lilith, magic, Moonchild, Templars, travel, Western Isles. Bookmark the permalink.

7 Responses to Something in the air? And three books by Alan Richardson